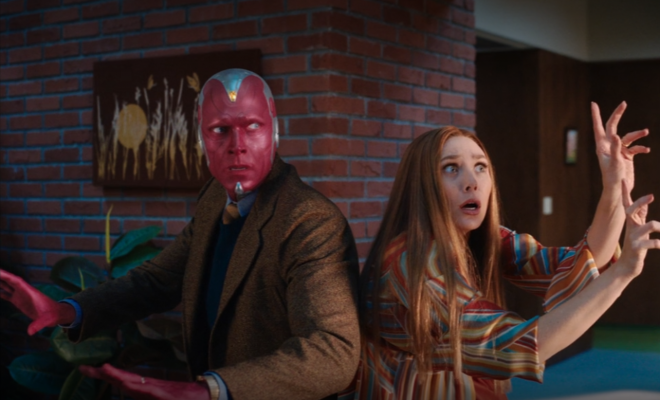 You all asked for it so, here it is! EricaVain.com will be posting reviews for the new hit miniseries WandaVision. I binge-watched the first five episodes of the series so let’s get into the first three episodes first. Make sure you keep coming back to check out the reviews for the following episodes.

The series starts off with Wanda and Vision arriving in Westview, New Jersey that is setup to look like the 1950’s.

The entire first episode was giving me I Love Lucy mixed with Bewitched vibes, and while I was here for the throwback TV references I was very confused about what I was watching and why.

This episode takes place after Avengers Endgame if you follow the Marvel Universe timeline, so for all intents and purposes Vision is supposed to be dead. This is an important thing to note and keep in mind as we move through this series.

In the beginning, we see Vision and Wanda getting their happily ever after 1950s style as Wanda is falling nicely into the role of housewife and Vision has found a regular job and is camouflaging himself well. I love the little inside jokes built into the story like Vision working at a place called Computational Services with a bunch of analog systems and papers and he excels at that job beautifully as he should…I mean, he is a computer for goodness sake.

The big event of the episode is the heart on the calendar marking an important date that neither Vision or Wanda can remember what it is supposed to remind them of. After speaking with Agnes, the pushy and extroverted next door neighbor that seems too good to be true, Wanda is convinced that the date represents she and Vision’s anniversary. Is it just me or is something off about Agnes with her resourcefulness and handiness with everything that Wanda needs when she needs it?

Anyway, Vision learns later that the heart was actually meant to remind them of the dinner they would be having with his boss and his boss’ wife.

These throwback episodes are nothing if not authentic, including the commercials used. In fact, the first episode included a Stark Industries toaster that looked like it was starting to malfunction during the commercial. Before the commercial ends we get the tagline “Forget the past, this is your future” and now I know we have to pay close attention to these because they are laced with easter eggs and ties to the MCU that we know from film.

We get the first peek into the cracks of this seemingly perfect world during the dinner with Vision’s boss when he asked about Wanda and Vision’s story and they have no response. They both can’t say what life was or looked like for them before they arrived at Westview and that throws a wrinkle into the matrix as his boss starts to choke on food. Then we have about a minute of his wife stuck repeating “Stop it, stop it, stop it, stop it,” and Vision has to step in and save him with his powers. Afterward, everyone goes back to normal as if nothing happened.

Now I can’t even lie, after Episode 1 I was like “What in the hell did I just watch?” I love the throwback vibes but it is very clear that the story we see is not the real story of the show so now I wondering what is gonna happen next. Seeing the control room at the end reminded me of The Truman Show and now I am really scared.

As we shift into Episode 2, I am even more confused because the house has changed and the decade has changed but it seems like the only time that has passed is a day.

In this episode Vision and Wanda are preparing for the neighborhood talent show fundraiser and they are dead set on participating in order to appear as normal as possible and to fit in with the people of Westview.

In this episode we also get to see what the outside of the house looks like and this neighborhood is giving Stepford Wives on steroids! Everything is just too perfect…Way too perfect.

The second crack in this perfect world’s armor happens while Wanda is cleaning up after the meeting and someone from a radio calls out to her asking ”Who did this to you, Wanda?” At that exact moment, Dottie is confronting Wanda about her belief that something is off about Wanda and Vision.

Right about here is when I started to get the idea that this whole thing might not even be real. Is Wanda dreaming? I hope we don’t wake up in Wakanda at some point but I digress!

After a few awkward moments with the radio, Dottie snaps back into what seems like a trance and is no longer confronting Wanda and also acting like none of the weird stuff that just happened happened. That is the second time the people in this world behave robotic or almost scripted response to weird shenanigans.

The talent show doesn’t go off without a hitch with Vision almost exposing him and Wanda’s abilities, but luckily she steps in and keeps up the facade by using their actual powers to make it seem like their talent was merely magic.

We make it to the end of the episode and the couple repeats their theme from today’s events “It’s all for the children,” but is it just me or have we yet to see any children in Westview? The talent show was supposed to be raising money for the children but there are literally no children…until Wanda magically becomes pregnant! Time is literally flying in this series.

We can’t end this part of the episode recap without talking about the guy at the end of the episode who came out of a manhole at the end who is in a bee catcher costume. Seeing this causes Wanda to panic and reverse time. So now we know that Wanda does have control over what is happening to her. This is getting very weird very fast!

Episode 3, true to its name, is now in color unlike the last two episodes and it is also featured in the decade of the 70s. They are giving us Brady Bunch realness in this episode and it’s very cool! Presumably only another day has passed and Wanda went from not being pregnant to being 3 months pregnant to being 6 months pregnant in a matter of hours! In fact, we get to see her entire pregnancy and delivery this episode.

We also get further confirmation that Wanda has some control over what is happening with her and Vision because her first Braxton-Hicks contractions throws the house into a frenzy and knocks out all of the power in the neighborhood. But the weird thing is she doesn’t know how she did it. So it’s safe to say that Wanda and Vision are not trapped in the past but that still doesn’t give us any more clarity as to what is actually going on.

As our curiosity starts to peak so does Vision’s because nine minutes into the episode he points out for the first time that something is wrong with Westview. After that I think Wanda rewinded time and redirected him which tells me that Vision is just as lost as we are and Wanda is even more in control than we thought!

This episode’s commercial is for hydra Soak and oh goodness not easter eggs for Hydra.

I don’t know about you all but I thought Geraldine was in on something or was maybe even spying on Wanda and Vision, but I couldn’t figure out why and how she fell so seamlessly into the script and perfectionism of Westview.

These two have a confrontation in this episode after she helps Wanda give birth to one of the twins. And that moment is simply weird as Geraldine looks like she is grappling with knowing the truth and not knowing nothing at all.

While Wanda and Geraldine are having their moment in the house Agnes and Herb are making points about her to vision outside. Geraldine has no home, no husband and she just appeared out of no where. Herb tries to say why Monica came here but Agnes makes him shut up suddenly and what do you know he is back in his trance like role. It’s almost as if they are all under mind control.

Monica remembers Pietro was killed by Ultron after Wanda mentions him. Then she snaps back and is back on program but when Vision returns to the house she is magically gone…

And we end Episode 3 seeing Monica/Geraldine being catapulted out of Westview and being recovered by the military forces surrounding the town.

The 1st 3 episodes really confused the hell out of me. Who is doing this? Who is broadcasting this? Why are they broadcasting? Who is watching? Why does the Westview world change everyday? What is this force field surrounding WestView? How the hell did Wanda have twins in the matter of 3 -4 days? Again what the hell is going on?

But I wanna know what are your first impressions of Wandavision after you watched Episode 1,2 and 3? Are you excited for the rest of the series? Tell me all your thoughts and theories in the comments section down below.

Before you go be sure to like this video and subscribe to the channel. I am working on the Wanda vision content schedule but we will at least drop episode breakdowns every week and could make more depending on what kinds of videos you wanna see. So let me know in the comments down below.