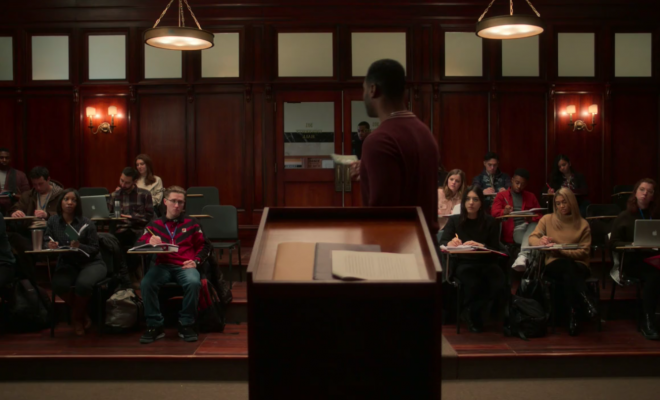 The episode opens with Tasha, Big Mama and Yaz celebrating Tariq’s birthday when suddenly Raina appears. That is the dead giveaway that something is wrong because Raina is definitely dead. But it’s awesome to see the actress again! Hey girl heyyyyyy!!!! The moment is short lived as we learn that it’s just Tasha dreaming from her cell. Yes, sis gonna need to get used to it because it don’t seem like she is getting out of there anytime soon.

Saxes is still scrambling to make the prosecution work and he goes to see Tamika pleading for her to not saying anything about him being a Truth the night of St Patricks murder. She has been subpoenaed by Davis and if she tells, it’s over for him.

Last episode Monet started with schooling Tariq and this episode she is imparting manipulative wisdom on Diana. Prepping her for how she is going to play men, specifically Tariq! Monet tells her that its a man’s world and she gotta be smarter to equal the playing field. She is schooling Diana on how to take control, have a man depending on her not just wanting to sleep with her.

As they are talking Ramirez stops by and Monet shows Diana a demonstration. Straight savage!

As Ramierz makes his abrupt exit, Cane and Tariq peep it. When they get in the house Cane wastes no time coming at Monet about having the cop sniff around and potentially cause problems. He knows they are fucking, so I get why he is so mad! Monet is unbothered by Cane’s temper tantrum and gets to address the business she summoned him for, telling Tariq that she found the painting Dru came back home with from Tariq’s art class. She wants to know who was the person in the drawing and like a smart lil kingpin in the making he lies. He has to hedge his bets and doesn’t know where he should bank his loyalty so he isn’t ratting on anyone, including Dru.

Not for nothing they be having Tariq run all over the place. Every time you see the dude he running or he late somewhere. Monet summons him to the house to get answers about Dru and then he has to leave there because Saxe summons him back into the city to complain about the subpoena for Tamika. Dude is 17 and all these adults got him running around NYC like he don’t have class, don’t have a drug organization to run and don’t have a Mama rotting in jail.

At first Tariq is cool with Tameka testifying until Saxe reveals that he told Tameka about being at Truth and now he is placed in it because if Saxe goes down for being in truth that night he will have to speak on Tariq being in Truth that night. This is a huge problem that Tasha has no idea about and she takes the opportunity to lose it because she has also been withholding information about how Tameka figured out that Tariq was Ghost’s shooter. Tariq’s first thought is to kill Tameka, lil Ghost is with the shits but Tasha backs him down. For now!

Saxe is trying to get his niece, Riley, to spy on Tariq so he can prove that Tasha’s legal team is being funded with dirty money, and they meet to discuss. We learn so much in that one conversation. 1. Riley is bout that life. 2. Riley is a freaky lil free spirited thing and 3. She actually has an in to get close to Tariq because she is now dating Brayden. Saxe tells her not to talk to anyone but Tariq and just observe and report back. Now he know sis don’t follow directions.

Remember when I said Tariq is always late. Yep he is late to his class again and Jabari tells Tariq that he knows what his family is going through but that his behavior reflects poorly upon black men on campus and he says he’s responsible for Tariq. Tariq tells him he needs to mind his business and stop acting like he is his dad. Both men are right… That’s all imma say!

Tasha tells Davis not to put Tameka on the stand and he puts his foot down because he is about the win and could care less about whatever reason Tasha has to want him to pull back now.

In a meet up with Dru we learn that Monet was testing Tariq, questioning him about Dru and that everyone knows that Dru is gay. Before dipping, Dru reminds Tariq to be loyal to himself and it seems like the most important statement of the entire episode. A storm is brewing.

I thought Brayden was simple as hell but when Riley is pressing too hard about getting information on Tariq it forces him to check her. We love to see it!

We finally get to see Jabari doing something other than breathing down Tariq’s, neck or fucking and fighting with Carrie. He meets up with his book agent and is shut down with his current manuscript. He gets warned about his next book needing to be a hit or he is dropped like a bad habit. So Mr. Perfect Professor isn’t so perfect.

After dropping off his newly updated 25 page paper to Jabari, a punishment for being late to class earlier, Tariq gets a call from Tasha explaining that Tameka has to testify and that that’s the only way she can come home. This conversation is truly beautiful and nuanced in that we see Tariq decide that he is with that and will take whatever comes from the truth coming out. He wants to bring Tasha home and is willing to sacrifice himself to do it. But of course, Ms. Get in her own way Greene, doesn’t want that, she tells Tariq to go convince Tameka to not take the stand meaning now it is okay to kill her.

Like a good son he goes over to Tameka’s house but is interrupted by Davis who even though he wants to still go through with the testimony is trying to figure out with Tameka why Tasha would not want her to testify. This literally saves her life, Tariq was this close to putting a cap in her ass.

Running off, Tariq ends up back on campus and at his surprise party planned by Brayden. Shout out to 50 cent for having the POP SMOKE play at Tariq’s party. After Brayden shuts Riley down when prying about Tariq for the 2nd time she accidentally drugs Tariq after she puts pills in Brayden’s drink but he hands it off to Tariq. Yeah that just went from 0 to 100 real quick.

The party turns out to be quite the scene because not only does Tariq get drugged but Dru gets snubbed by his art student obsession and Diana get’s sidelined by Tariq for Lauren.

The episode can’t end before we see what Jabari will do next. Yup, and that’s plagiarize Tariq’s beautifully written paper for his new manuscript. Dude is just pathetic. Shit is sad!

The most ridiculous of ridiculous plot twists ever is when Zeke meets up with Carrie at a restaurant and they end up having sex in the bathroom. SIS! You just read Jabari for filth for fucking the students and here you go. Plus, Zeke is DUMB… Girl what is you doing?

The most awkward moment of the episode is when Diana and Lauren meet. I forgot to mention that.. Chillleeeeeeee Da Ghetttttooooooooooo. After Tariq is fully feeling the effects of the pills slipped into his drink, Riley sneaks into the room and breaks into Tariqs phone. She didn’t mean to drug him but it actually helped her get a bit further with Tariq. She turns on Tariq’s GPS tracking, shares with her phone and with that a dumb ass Saxe is able to follow a drunk and drugged Tariq to Ghosts’ grave-sight when he confesses to killing him. And Saxe gets it on tape!

The episode ends with Brayden’s brother finding their stash and taking it and Saxe shows Davis the video of Tariq’s confession. All about the win, Davis agrees to partner up with Saxe to put Tariq away and get Tasha out of jail and the series just escalated to a whole new level!