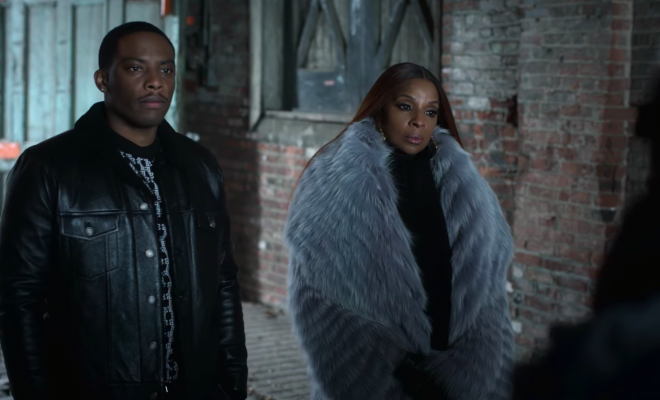 We are four episodes in and ish is getting REAL! Tasha will probably rot in Jail, Tariq might have found a new Mama and Lorenzo is not to be fucked with.

The episode opens on Tariq and Monet. Now that she has accepted being his distro she has to give him the rundown which is simply, THE RULES! After being busted at CHOTE it’s interesting to see how Tariq will restart his drug business to even be able to sell the stuff Monet gets him. Less than 2 minutes into the episode we get a peek into how Tariq is about to work that out. I am going to ignore “Bash Stern”, Simon Stern’s new Young Husband. Tariq reaches out because he wants help to launch a “tutoring app” and it’s fishy as hell!

Before Tariq can celebrate the new partnership, Tasha is on his line talking about “Boy you need to get a gun NOW”. Sounds about right, since Lorenzo is calling and threatening Tasha from jail. I told yall ish getting real! Now Tariq has to search old Tommy and Ghost flops to find a gun they may have left behind.

Some of my favorite scenes are when Tariq is in class. The coursework is providing a brilliant parallel into Tariq’s life and it’s nice to see him bounce in and out of the underworld. There is a fellowship opportunity which if Tariq secures can help him get through the degree in 3 years which he needs to get his inheritance. One problem, new soon to be bae, Lauren wants that internship more. I smell a competition brewing.

In other news, Tariq’s Partner-in-Party, Brayden is looking real shaky worried about the resident Stansfield drug dealer who is upset and putting the word out for the new drug dealers on campus. Him and Tariq are poised to be new New York City Kingpins and he tripping over a hippy dude who can’t move his lil weed in things. I am rooting for Brayden but something tells me he may be apart of the fall of Tariq, you know after he gets on top.

Monet and Cane have to dead the rest of the foolishness from GTG crew, cutting them off completely and of course they do not take it well. Cane has to step in and deliver a swift ass wiping real quick after the “leader” of the squad calls Monet, “punta”. Now he knew Monet wasn’t gonna let that slide. What’s most intriguing about this scene though is how Cane moves almost automatically, and without an actual verbal order. After the brutal beating he looks up at Monet and says “ain’t that what you wanted” as almost a nod to him knowing what to do in business and being able to anticipate her needs. It’s an awkward, yet endearing beat!

Ahhhhhh, there it is, the app that Tariq starts at the beginning of the episode is actually a front for the drug organization and I ain’t even gonna hold you…….. That shit is brillant! And he knows it. Tariq starts to ascend very quickly, raking in mad money after recruiting students to sell for him and getting the app up and running. Upon getting his first round of money he swings by Davis Maclean’s law office to drop off a payment and let him know that he means business. Promoting, Davis’ investigator to question where is he getting his money and making another plea for Davis to drop him.

We get to learn a bit more about the Tejada family and how they run their business as they have a family meeting about now supplying Tariq and discussing how they are going to get info on how he runs his business in case they have to shut him out. Diana volunteers to go to the school and spy on Tariq but it’s Dru that gets the job, I mean he is pegged as the next in charge if Monet was to step aside. Oh and we get a hilarious reminder that Cane wants to lead but he is muscle and needs to just stay muscle. His Mama told him “Look at you, You aint in nobodies Ivy League”….

Saxe is not gonna be able to easily convict Tasha as the Queenpin. I mean aside from him knowing damn well she isn’t the Queen Pin her having the murder weapon and admitting to getting Tommy to kill Ghost for her, her has some mess of his own to clean up. Davis is on it and has him in judges quarters to question his practices while pursuing this case. Starting to tug at the hundred of loose strings in this case. A hard pull on any one can result in Saxe and Tasha being in jail.

On campus, Dru and Tariq attend art class that leads to Dru meeting a boy who is intrigued by the way he draws. Dru is so caught up in the new boy that he misses Tariq sneaking out of class which is his mission of actually being on campus. Boy Monet did not send you to that school to get your freak on!

Saxe knows he is going down fast. Davis is a great defense attorney! He now is on a hunt to figure out how Tariq is paying for the law services in the hopes of turning up something that gets Davis removed as Tasha’s attorney. I guess it’s a good thing that Paula, Davis’s investigator started asking similar questions and rolled up on Tariq making it clear to him that he needs to be paying them with clean money, wired into the law firm’s accounts like any other normal, non drug dealing client. With Tariq’s app working beautifully and being the built in money cleaner, there is no way Saxe will be able to prove there is any foul play with Tariq or his finances. Well almost no way. Saxe, rebel niece gets busted and brought in and our law enforcing and breaking US Attorney Saxe decides to get her to spy on Tariq. She is desperate!

I almost forgot about Dru. Yeah, he is busy getting it on with the boy from Art class while Tariq is selling out of product, finding a gun, getting rolled up on by Paula and shuffling to make it to dinner with Lauren and the professors. He’s supposed to be getting info on Tariq and today would be the perfect day to see it all but all he is trying to do is get his swerve on. But you know what, he deserves it so do you Dru! Because Dru is “tied up” Diana is tagged in and has to bring the reup to Tariq on campus. Just what Diana wanted from the jump and sis does not miss an opportunity to make her move with Tariq.

I have just about had it with Jabari and Carrie. They are fighting and being petty at the dinner and then fucking in the office on campus. Like yall gonna be together or nah… Well Jabari you gonna stop fucking your student and focus on Carrie or nah…. These two are literally out to get each other before going at it and it is the most toxic yet intriguing shit I have seen in awhile. Yall need therapists!

Before I breeze right pass that dinner at Lauren’s parents house, the kiss between Tariq and Lauren and the surprise pop up from her boyfriend. Let’s have a moment of silence for Tariq’s options. Business is bombing, women are on him… Life is GOOD!

The episode ends with Tasha getting a picture of Tariq texted to her phone. Lorenzo getting her all worked up and for right now, Tariq is fine.