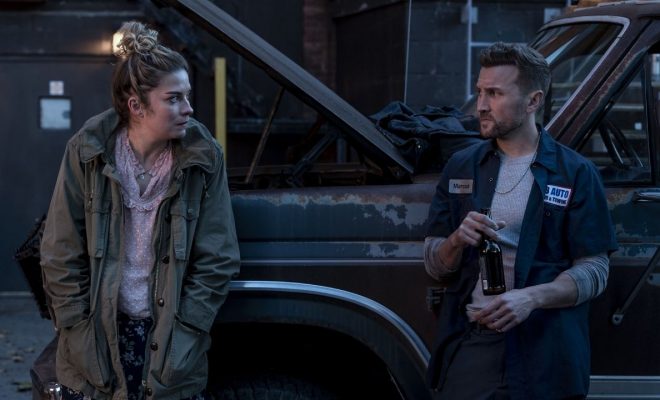 This Article was updated on August 25, 2021 by Riley DeBoer

Kevin Can F*** Himself: Premiere Review

The series opens as so many 3-camera sitcoms have. The warm colors, a roaring laugh track, and an opening scene as formulaic as they come. Our nagging housewife, Allison (Annie Murphy), unsuccessfully tries to get her bumbling man-child husband, the titular Kevin (Eric Petersen), to stop playing beer pong in the living room.  His group of cronies encourage his buffoonery and join in on the heckling of his wife.  But everything changes when Allison exits the room.  Because in this world, when a character isn’t in the same room as Kevin, they leave the sitcom. All of those sitcom staples are stripped aside, and we see the harsh reality of these characters.

If you’re starting to think this show sounds like WandaVision, it isn’t! In fact, there’s no (apparent) supernatural entity controlling these characters.  There’s not an “imaginary world” and a “real world.”  This is life for these characters. The events that happen in the sitcom directly influence the events that don’t.  An argument could be made that the only difference between the two “worlds” is that one has a laugh track, and one does not.  The show wants us to feel the dread that these characters face every day.  And in that, it succeeds.

In two episodes, Annie Murphy has already demonstrated that she is a force to be reckoned with. She easily maneuvers between sitcom acting and genuine emotional turmoil.  It is still quite early into the series, but with a debut this promising, I wouldn’t be surprised if Murphy receives her second consecutive Emmy nomination. The titular Kevin is played to perfection by former Shrek The Musical star Eric Petersen. He is as unpleasant as the show needs him to be, and is completely believable as a man who is destroying his wife’s life.  I am looking forward to seeing the divide between these characters further.

Conceptually speaking, this series has the potential to be great.  Using the ingrained sexism within sitcoms allows the series to have real conversations about gender inequality.  And although Allison’s journey is one of fiction, her actions within the series are grounded in reality.  Allison has wasted 10 years on Kevin, and now she is on a mission to reclaim her power. It is topical, relevant, and the series we need right now. I know that I for one am excited to see what else this show has in store!

With a series that takes this big of a conceptual swing, it can be quite difficult to stick the landing when all is said and done. It is too soon to tell whether Kevin will meet its mark, but don’t worry because we will be here each and every Monday to tell you our thoughts on the most recent episodes!

If you like Kevin Can F*** Himself, then you should watch our video coverage of WandaVision for another dark look at the sitcom format. And if you haven’t yet, be sure to also check out our coverage of Loki and Sistas.

Kevin Can F*** Himself: Premiere Review