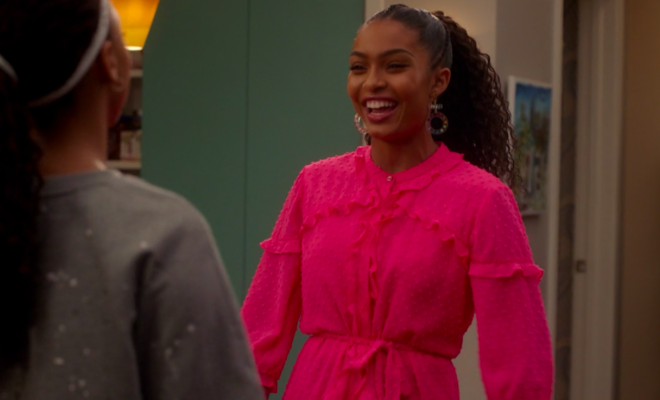 Zoey has had a lot of ups and downs throughout the duration of the show. And she has really changed from the bright-eyed freshman to the grownup we all know and love today. Let’s take a look at her transformation over the years.

When Zoey stepped onto Cal us campus, her world was forever changed. It was a new world filled with exciting experiences, first times, friendship drama, and of course confusing love triangles.

Throughout the show, we get to ride along this journey together as Zoey attempts to navigate the craziness that is college. We get to experience all of the ups and downs and mistakes she makes along the way.

Speaking of mistakes, she makes a lot of them, repeatedly.

At the beginning of the show, Zoey gets herself caught up in a love triangle with two boys from her midnight drone class. And as you could possibly imagine this created a lot of overwhelming drama that Zoey had to navigate.

She first falls for Aaron a sophomore activist with a rat tail. This begins the strenuous back and forth, that we continue to see throughout the rest of the show. From the very beginning, both Aaron and Zoey have a difficult time coming to terms with their feelings for one another and find it easier to just be friends. Friends with some serious sexual tension if I do say so myself.

Luca, a laid-back, fashion student at Cal U catches the attention of Zoey. They spark an undeniable connection and he even offers to make a dress for her for the freshman formal. Zoey is ecstatic, but when it comes time for the dance, Luca skips out leaving her all alone.

But, the drama doesn’t end there. At the formal Aaron comes by and admits to Zoey that he likes her more than a friend and they kiss. But just as she turns around she sees Luca standing behind her with a bouquet of flowers.

Zoey now has to figure out who she has a stronger connection with between Luca and Aaron. She thinks it over and ultimately chooses Luca, and they start dating. However, even though their love triangle seems to have come to an end, it is far from over. And this where we truly begin to see just how Zoey functions in relationships and in life in general. And to be quite honest she does not have her shit together.

Season 2, is where she starts questioning every major decision she has made thus far, having some serious mental breakdowns along the way.

Zoey breaks down in design class. At this point, she is questioning if she even has a talent or likes design anymore. And it definitely doesn’t help that her boyfriend is a fashion prodigy. Not living in his shadows or anything.

In fact, she is so unnerved and jealous of Luca’s effortless talent and is forced to do some serious soul searching, Zoey realizes that she no longer loves design anymore and decides to drop the class to focus on her friends and her boyfriend.

Zoey can now see clearly and decides that she wants to become a professional stylist. But just as Zoey tries to get on track again, her life starts falling apart.

After a night of one bad decision after another, Zoey winds up sealing her fate by cheating on her Chem final. She gets caught of course, and almost gets thrown out of Cal U.

Oh and to top off, not only is she on academic probation, and financially cut off, but Aaron accidentally tells her that he and Ana have been hooking up.

To make matters even worse, Luca and Zoey get into a fight over the whole Aaron situation.

Apparently, Luca doesn’t like how mad Zoey is about it considering the fact that she is a relationship with him…not Aaron.

Zoey’s the true queen of making bad decisions at this point. She is again having to face the reality of her decisions. Can she continue to be with Luca, if she is still thinking about Aaron?

After getting a once and a lifetime opportunity to work as a celebrity stylist for Joey Badass, the issues within her and Luca’s relationship become undeniable, and they break up.

After reflecting on her recent breakup she begins to notice how Aaron has been there for her no matter what. And before parting ways to start the new job she kisses Aaron goodbye, making their already confusing relationship even that more confusing.

Unfortunately, the whole “being there for someone thing is completely “one-sided at this point. While Aaron is always there for Zoey whenever she needs it, the same thing can not be said for her. And she learns that lesson the hard way. Turns out you have to give as much as you get in a relationship. And when Aaron asks for one simple favor, or course Zoey forgets because all she can ever think about is herself. No shade, just facts.

Aaron gets rightfully pissed at her and she tries to get back in his good graces but he has had enough of her bullshit.

And he doesn’t hold back he tells her how selfish she is and how she always plays with his heart. He doesn’t want to continue doing it anymore. Zoey has some serious self-reflection to do.

And reflecting she does. She decides to leave Cal U to work for Joey Badass full-time. The first of many big girl decisions she makes. But is she equipped to handle herself in a grown-up role?

Well, the short answer is no. The truth is, while she was busy starting her career she was missing out on all of the life-changing and important events going on at home.

This is when the tides start shifting and we start seeing Zoey actually take some responsibility for once. In the past, she tried so hard to show up for everyone and manage everything. She tried so hard to be the perfect girlfriend to Luca, a hardworking designer, a successful student, and a supportive friend. But she was taking on too much at once that she ended not only letting herself down but everyone else down around her.

This time, she began realizing that she needs to focus her time and energy on what truly matters the most to her. She decides to quit her job with Joey and re-enroll at Cal U to focus on her friends and her education.

It really seems like Zoey is growing up and make amends for all of her mistakes in the past.

But, Luca is skeptical of Zoey’s transformation. After Zoey confesses to him about cheating with Aaron on his girlfriend Rochelle, Luca throws some major shade at her. He basically tells her that she is selfish and is always thinking about what she wants, without ever considering who she hurts in the process.

But instead of fighting back, and getting defensive as she used to, she takes note of what Luca said. She apologized to Aaron for never being able to make a decision about their relationship and about constantly sending him mixed messages throughout the years.

Not going to lie, I was really surprised that she took control of the situation and actually apologized to Aaron.

But I want to know what you guys think. Do you think Zoey has matured over the last few seasons or is Luca right? Is Zoey the same person she has always been and will she continue to put her needs before everyone else?

I am curious as to how she will handle the possible obstacles headed her way in season 4.