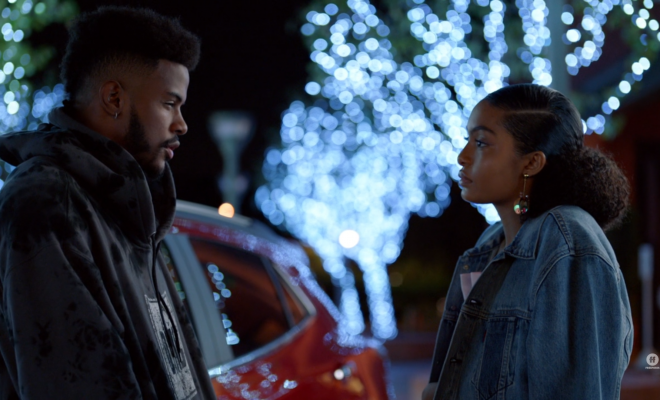 Zoey and Aaron’s relationship over the last three seasons has been rocky, to say the least. They are always on and off again. They can never seem to be on the same page at the same time.

Let’s quickly recap all of the drama that took place in the last few episodes.

Zoey just finishing up a shoot in Miami and decides to text Aaron. In the message, she expresses her true feelings. Aaron responds by telling her that he wants to hook-up when she gets back to Cal-U. Zoey is ecstatic by his response, but it turns out they do not have the same understanding of the phrase “hook-up”. Because when Zoey heads back to Cal-U to see Aaron, she finds out that he has a girlfriend. Looks like they, yet again, are not on the same page.

Zoey and Aaron go outside to get some fresh air to try and clear up the misunderstanding. Aaron finally buckles down and admits to Zoey how he truly feels about their relationship dynamic. I mean he does not hold back. He tells her how when he received the text from her,  it was everything he had ever wanted to hear from her during the last three years. He put himself out there so many times to just always end up being rejected. Aaron confesses how he is tired of her inconsistency and is terrified that if he puts his heart on the line again that he will get played.

Oof that hurt a little bit. But luckily they manage to go back to being just friends even though Zoey has to constantly swallow her feelings, especially around Aaron’s new girlfriend Rochelle.

But even though they are just friends their undeniable chemistry has Rochelle doing a double-take. She starts to notice how comfortable their friendship is and after one of Aaron’s successful protests, she goes up to Zoey and asks her to fall back from him.

Aaron’s protest was such a success that it garnered attention from national news, putting Cal U in the hot seat. In an attempt to save Cal U’s reputation from Aaron’s wrath the Dean makes Aaron an offer to expunge his student loan debt in exchange for his silence.

Desperately in need of advice over what to do about the Dean’s offer, he runs into Zoey and asks for her help. She tells Aaron to listen to his heart and knows that if he accepts the Dean’s offer he will always live with the guilt.

Looks like Zoey is learning how to be a good friend. Taking some much-needed notes from Aaron.

Already confused about everything in his life, Rochelle tells Aaron to take a step back from Zoey. Even though you can tell he doesn’t want to, he decides to confront Zoey about it.

But during their discussion, things get heated, and she blurts out that she loves him. Way to do it while his girlfriend is just a few doors down. But Zoey has never been one for good timing. Nevertheless, they hook-up, and now their relationship is more complicated than ever.

On the one hand, He and Zoey have a long history together, not to mention feelings for each other. But, Zoey and Aaron have not always proven to be the most compatible. Drama seems to follow them everywhere.

On the other hand, he and Rochelle have not been together very long. But their relationship is far more stable than Zoey and Aaron’s by a long shot.

It is safe to say Aaron and Zoey have some figuring out to do.

Zoey seeks advice from Luca and confesses to him about cheating with Aaron on his girlfriend Rochelle.  Luca throws some major shade at her. He basically tells her that she is selfish and is always thinking about what she wants, without ever considering who she hurts in the process.

This time she takes Luca’s harsh criticism into consideration and texts Aaron asking him to meet up. She apologizes to Aaron for never being able to make a decision about their relationship and for constantly sending him mixed messages throughout the years. Trying to make the responsible decision, she tells Aaron to pick Rochelle.

But Aaron has waited for way too long to be with Zoey and he is not about to give up this easily. He goes over to her place and tells her that he wants to be with her and they kiss.

Finally at last they are together. I have honestly waited forever for this moment. They have been so back and forth for so many years, the anticipation was killing me. But now that they are together I am wondering if it is going to last.

Even though I am super excited over the fact that they are finally together I can’t help wondering if they will be able to get over their past relationship drama.

I mean most of their relationship up until this point was them going back and forth. One moment they would be mad at each other, the next they would be friends, and sometimes they would even share a passionate moment together.

But do they really like each other or do they just like the game that they play? The anticipation of their relationship has been building up for so long that I am wondering if it is going to be anticlimactic once they are actually together? Or will they stir up controversy like always just to keep it fun and exciting?

Luca in the season finale seemed to doubt Zoey and her ability to maintain relationships. And damn did he really not hold back. His anger kind of sort of seemed like it could be coming from a place of jealousy.

I am wondering, now that he and Jillian are no longer together is there a potential that Luca might rediscover his feelings for Zoey?

Or at the very least, will Luca be a potential pain point in Aaron and Zoey’s relationship in Season 4?

But I want to know what you guys think. Do you think Zoey and Aaron will actually stay together? And do you think Luca will involve himself in their relationship?

To me Aaron and Zoey are endgame. I am just hoping that if anything, they have a rocky beginning but then eventually find their balance.