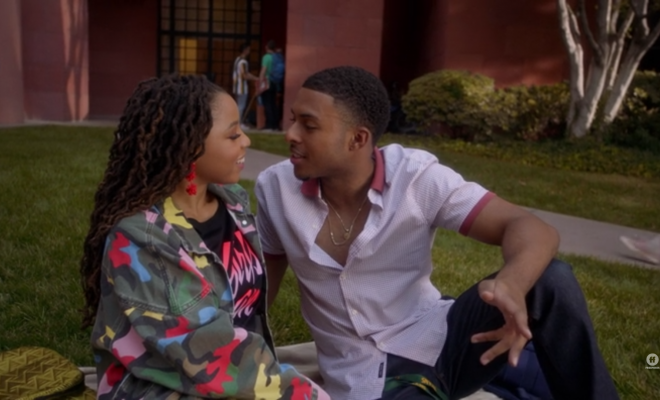 Season 3 has been a whirlwind of emotions, but nothing has been quite as heartbreaking as when Jazz and Doug officially ended their relationship. I am grasping onto hope at this point that they will end up together, but nonetheless, let’s take a look at their iconic relationship up until this point.

They have had a wild ride thus far, so let’s recap all the good, the bad, and the ugly.

We first get introduced to Doug in season one. Jazz and Sky are at a bar and Sky goes up to Doug and asks him out of the blue why he doesn’t date black girls. Kind of a weird way to introduce yourself but ok I guess.

This catches him off guard and his response is anything but impressive. The next day he runs into Sky again and answers her question more thoughtfully this time. But who else happens to be there, none other than Jazz. From this point on sparks are flying between the two of them. And just a few episodes later they make their relationship official.

Starting off season two, they are stronger than ever. Posting cute pictures, going on romantic dates, definitely relationship goals. They have got each other’s back.

But it doesn’t take long for their relationship to go array when Jazz starts posting elusive photos of herself on Instagram.

Doug is not happy that she is posting her body all over the internet for everyone to see. He even goes as far as to say that it is “disrespectful” to their relationship for her to post thirsty pics on Instagram. Can’t say I agree with Doug on this one.

Jazz and Doug try and settle their differences over this whole Instagram situation, that is until Doug gets into a fight with a guy at the bar. The guy asks for a picture with Jazz and nonconsensually grabs her ass.

Doug isn’t too happy with the situation and tells Jazz that he needs some space. Looks like their first break-up.

But the drama doesn’t end there. Someone hacked into Jazz’s account and deleted her posts. She is rightfully upset, and without thinking immediately accuses Doug of being behind it.

Turns out Jazz spoke too quickly, and it was actually her dad who did it. So Jazz musters up the courage to apologize to Doug for accusing him without any information. They both make-up and a few weeks later they are back to calling each other boyfriend and girlfriend again.

Everything is going well and they even drop L-word. They keep the cute moments coming. Gracing our screens with their seemingly perfect relationship. They can not get enough of each other.

However, their tunnel vision of love is ultimately the final nail in the coffin. Turns too much of a good thing, can actually be a bad thing. Jazz is seeing Doug so often that she is losing her focus.

She keeps showing up to practice late, her times are worse than they have ever been, and it’s driving a wedge between her and Sky’s relationship. Not good. She tries to make it work but balancing everything is getting too hard and she has got to get her priorities straight.

Jazz thinks the best solution is to quietly put some distance between the both of them. But clearly, her plan backfires and they ultimately decide to go on yet another break so that way Jazz can focus on her career.

But with all things this break is quite difficult and messy. They have yet to figure out what lines can and can not be crossed. Confusion spirals out of control and instead of just a 6-month pause, they decide to end the relationship for good. Jazz asks Doug to make her one promise, that he will not fall in love with anyone for the next 6 months. And just like that are officially over.

Is this the end of the road for these two? Hopefully, we get more answers in future episodes to come. I’m definitely hoping there is more to their story.