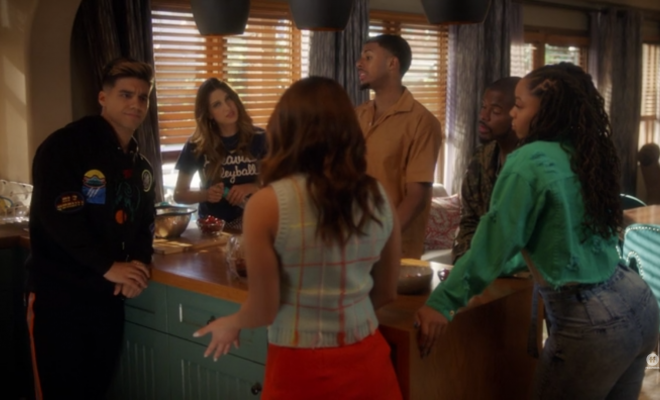 This week’s episode was all about getting to know yourself. So let’s unpack all of that internal drama.

Let’s start with Vivek, the star of this week’s episode. Finally, we’ are giving some much-needed screen time to our favorite low-key drug dealer. During a wild night out with his girlfriend Heidi, he takes MDMA.

As Heidi and Vivek are experiencing the height of their high, their friends around them start to drop off one by one, until it’s just the two of them. Well, the lovely couple and this other guy named Alex.

To make matters even worse, they start to point out all of the ways in which Vivek acts “gay”, like how he dyes his hair, drinks through a straw, and eats a banana in public. And that’s on toxic masculinity.

But Vivek knows who he is and stands his ground. He does not let the opinions of others define him. We love that confidence!

The conversation carries itself all the way back to the rest of the gang members. Including Nomi! That’s right she is back with baby Luna and is ready to voice her opinion in this seemingly distasteful discussion surrounding sexuality.

The fighting and debating are on-going. Nomi and Vivek are constantly trying to explain to everyone the varying degrees of homophobia, but they just are not getting it. Aaron believes that two girls kissing symbolizes a right of passage, while two guys kissing is gay. It’s a double standard for me.

But Vivek holds his own and does not let Doug and Aaron’s baseless opinions sway his judgment. He knows that having one experience does not define you as a person. And with that, he kicks them out.

Nomi goes to Aaron’s apartment to try and explain to him where he and Doug went wrong. After that Doug and him finally see the errors of their ways and go apologize to Vivek by bringing him a cake. Definitely wasn’t what I was expecting, but hey I am happy they are finally learning.

But that wasn’t the only tea being spilled during this quite uncomfortable situation. Doug has yet to get over the Jazz-sleeping-with-another-guy thing. He even goes as far as to call her a “Toss”. Ouch.

But Doug checks himself and apologizes for the way he has been acting. And just as they are about to get it on, Doug is reminded of Jazz’s ex-hookup and the mood quickly dies.

Vivek isn’t the only one holding his own in this episode. Junior comes all the way down to Cal-U to reclaim his love for Sky. Even though Sky is with Rodney, he still persists in trying to get her back

After tirelessly trying to pursue her, Junior gives up and apologizes to Sky. He says that he is really happy for her and Rodney.

But in a quick turn of events, Sky whispers in his ear to slide in her Dm’s. I am still trying to figure out what to make of this.

Are she and Rodney broken up? Does Junior Still have a chance? Where has Luca been?

Hopefully, we will get the answer to all of these questions and more in the coming episode.