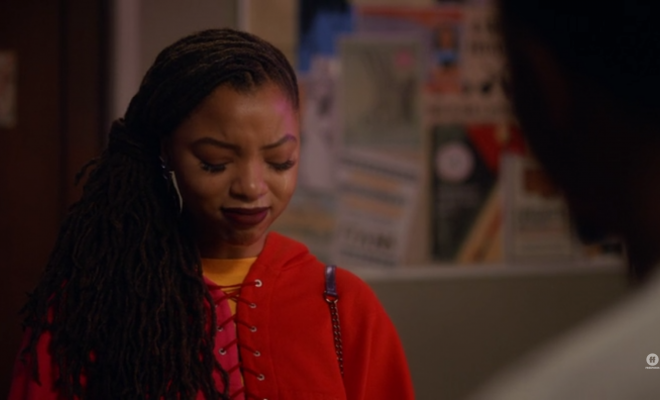 This week’s episode was filled with crazy turning points. It seems like everybody has got some decisions to make. Let’s debrief.

Where to begin with all of this drama.

Zoey just got back from a long weekend and ts seems as if everything is passing by her at the speed of light. Everyone has got stuff going on and Zoey can’t seem to keep up with the news. This is one of the first times Zoey is actually confronted with the real-life drawbacks to her dropping out of Cal U. She is now completing whether or closing that door was such a good idea.

Jazz and Sky returned home after winning the NCCA finals. Looks like that break from Doug really paid off. Or did it because turns out Jazz had a one-night stand and now she is going to have to deal with that reality whether she likes it or not.

Junior versus Senior Day is right around the corner and everybody is excited. Well everybody but Zoey, because turns out school events are only reserved for students, which she is not. But that’s not going to stop the rest of the gang from having a good time.

At least it was a good time until, Ricky, Jazz’s one-night stand comes into the picture. Doug asks her straight up who he is and Jazz panics and lies.

But the lie quickly comes back to bit her in the ass when she returns home seeing a beautiful bouquet of flowers from Doug sitting on her counter. The guilt eventually eats her up inside and she decides to go tell Doug the truth.

Jazz completely breaks down at his door and admits that she hooked-up with Ricky. He appreciates that she was honest with him, but he is clearly disappointed. Turns out he has not been with anyone and was waiting for her this entire time. Heartbroken, he closes the door, and now we are left wondering where their relationship stands.

But it looks like Jazz isn’t the only one with relationship troubles. Vivek is also having his fair share of issues. His new girlfriend doesn’t know he is a drug dealer, and he does not know how to break the news to her. She is obviously growing more suspicious and when she confronts him on why he is acting so weird he tells her the truth. Well not exactly. He kind of does, but then laughs off and pretends like it was a joke.

Nice Save. Vivek finally got himself a girl, now let’s just see how long he can keep her for. My bet is not very long.

Meanwhile, Aaron has met with the dean to discuss his recent protests. His activism has been popping off lately, grabbing the attention of major news networks, including the shade room.

However, Aaron is presented with a difficult decision. While there is a divestment plan in the works it will not come to fruition in at least 5-10 years. Aaron is obviously upset by this but the Dean is already two steps ahead. The Dean offers to expunge his student loans is signs a non-disclosure saying he will not say anything against the administration.

And to be expected Aaron is immediately propelled into a state of moral crisis. And while he is trying to debate the state of his future he runs into Zoey. She attempts to fall back, but Aaron seeks out her advice. She tells him that he will hate himself for taking the money, and asks him to consider whether or not guilt is worse than regret. Nicely said.

But turns out his girlfriend isn’t too happy about Zoey’s advice. Mostly because Aaron discussed this important life decision with Zoey first and not her. Will Rochelle’s jealously over Zoey be the catalyst that ends it all? I hope so. I just want Aaron and Zoey to be together already.

What an eventful episode. It has left me with so many questions like Is this the end of Jazz and Doug? What is Aaron going to do? Should he listen to Rochelle or Zoey?