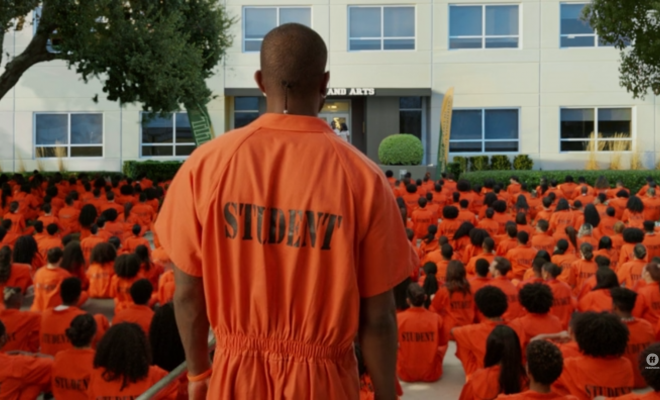 This week we finally get some more clarity about some of the drama that took place in the last few episodes. Between all the relationship meltdowns to Aaron’s arrest, this week’s episode definitely stirs the pot.

Aaron was released from campus security, but it did not take long for his video to go viral. It was so viral in fact, that it caught the attention of national news. He now has a growing platform and is set to hold a one-on-one interview with Angelia Rye on National News. It’s everything Aaron has always wanted, a space to speak about issues he is deeply passionate about.

Hawkins is throwing a watch party to celebrate. But Zoey, after completely embarrassing herself last episode, decides it’s probably best for her to stay in and watch instead, you know to taint what is left of her integrity at this point.

But Sky and Jazz do not let Zoey get off that easily. They blatantly remind her that if she wants any relationship at all with Aaron she has to start by being a good friend first. And good friends show up and support one another. They are not wrong.

It’s watch party time and everyone is excited to see Aaron on National TV. This is his moment to shine. He starts off killing it, however, it doesn’t take long for him to completely ruin it. Big Yikes. Honestly very cringy to witness if I do say so myself. He could not for the life of him stay on point, he just had to mention everything that bothers him. And it definitely was not a good look.

After his interview was done, his friends tried to restore whatever dignity he had left, but it’s safe to say that everyone knew he flubbed.

But, instead of trying to preserve his ego like everyone else, Javi keeps it real with him and tells him where he messed up. He actually gives Aaron some pretty good advice. Who knew.

Speaking of Javi, Ana is debating on whether or not she should tell him about her past with Aaron seeing as they are all buddy-buddy now. She tries asking Jazz and Sky for advice but seems to be getting mixed reviews.

Jazz and Sky are also in a difficult position themselves. Jillian wants to film their passionate activism for the documentary, but Jazz and Sky are worried to speak against the administration. They are worried that they will lose everything they have worked so hard for. Jillian tries to play devil’s advocate and urges them to go to the demonstration that Aaron is planning. They have big decisions to make. Their reputation or their values.

However, back to Aaron’s mess. He has finally admitted his defeat and is now looking to right his wrong. So who does he seek help from in his desperate time of need? None other than Zoey Johnson. I can’t say I’m surprised but I am a little disappointed. We have been through this so many times before. When is he going to learn?

But despite my criticism, he is confident in Zoey and is assured that this time will be different. He asks her for some help to design a statement piece to wear to the demonstration. He wants everyone to feel united by the cause and he wants to use clothing to do it.

Zoey is all in on the idea and actually goes above and beyond. I was totally expecting her to fail, but I have got to say I was quite impressed.

She even Facetime’s Aaron while he is watching a movie with his girlfriend to tell him about how in addition to creating a piece for the demonstration, that she also wants to create bracelets for everyone to wear. While he loves the idea, his girlfriend isn’t too thrilled with how close Aaron and Zoey are.

But nonetheless, it is the day of the big demonstration and it is a major success. Aaron was able to keep his cool this time around and Zoey’s matching jumpsuits definitely helped elevate the message. So much so that Jazz and Sky were able to put their fears aside and join all the students for protest.

Ana also was able to make her mind about what to say to Javi, and unfortunately, it did not come out as gracefully as she would have hoped. And by gracefully, I mean she practically announced to the entire Cal-U student body that she used to hook-up with Aaron. But no worries as Javi didn’t seem to make a big deal out of her embarrassing announcement and was just happy that she told him.

Apparently, everyone is feeling confident and energized after the big demonstration. Zoey even musters up the courage to congratulate Aaron on his big moment. Looks they can actually have a normal friendly conversation without it being awkward. Well, without it being that awkward.

After their talk, Aaron’s girlfriend approaches Zoey and asks her if she can take a few steps back from Aaron. She respects their friendship and all but she doesn’t want it to get in the way of their connection. Zoey graciously agrees and that is where we leave off.

I for one am glad to see that Zoey and Aaron’s relationship made a decent recovery. And I am happy that Aaron is finally making his dreams of spreading social activism come true.