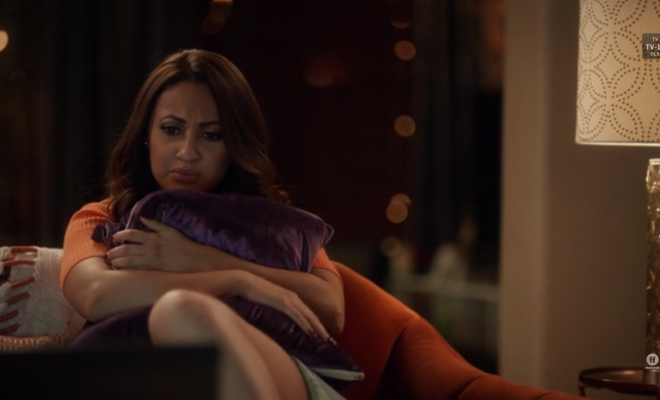 The episode titled “hard place” was the perfect name to describe all the drama that went down last night. Tonight’s episode shined the spotlight on our two favorite political activists’ slash rivals, Ana and Aaron.

Ana and Javi’s relationship has been going very well so far. However, Ana wants to take her relationship with Javi to the next level. Just as she was ready to step the passion up a notch Javi revealed that he is celibate. Yep, that right! 6 months ago Javi made a pact with God to abstain from sex. Didn’t see that one coming.

Clearly, neither did Ana because her immediate reaction was to assume that Javi was lying. They talk it out and she decides to ease into her relationship with Javi given all of her bad luck in the past. This could be good for her.

While the news seemed endearing and refreshing at first, Ana was ready for a little more excitement in her life. At first, she was humbled by the idea that he wanted to wait and was happy by the fact that he respects her and doesn’t only want to hook up. Typically her experiences with men tend to be rushed and do not go over well so this was a nice change in pace.

However, as the episode dragged on so did Ana’s patience. Her commitment to abstinence was quickly dwindling.

Flustered, Jazz and Skyler try and offer their two sense. They tell Ana that she should tell Javi how she feels.

Ana tells Javi that she is trying really hard to respect his boundaries but it is difficult for her. Always wanting what you can’t have. She then asks him where he gets his strength from and how he is able to make a commitment like that.

But seriously they have a DJ, music, everyone is dancing, the pastor is wearing a flannel holding the mic like a wanna-be rapper. I mean they’re making this whole commitment to god thing look kinda dope.

Ana is feeling super good after this new experience and decides she wants to reaffirm her relationship with God and religion again. Make that two celibates now.

Aaron is also going through his own journey as well. It’s been a while since he has attended a BSU meeting and he is kind of over their performative activism at this point. But he reluctantly decides to attend a meeting with his girlfriend. And damn has he missed a lot.

Turns out Cal-U has been investing tuition into private prisons. And while the BSU has known about this for weeks and even had a petition to try and stop it  Aaron is just hearing this news for the first time. Looks like it’s not just Harvard doing this shit.

To make matters even worse these companies are also funding the school’s security.

Aaron being Aaron decides to take it upon himself to spread awareness about this issue. He creates a peaceful poster takeover across campus, informing fellow students of the grave misuse of their payments. When approached by the on-campus police, Aaron explains to how he is doing is nothing wrong, and the posters are just informational. They tell him to take them down and threaten to arrest him.

Aaron doesn’t back down and gets arrested by the cops while his girlfriend films him getting pulled away. That is the last we see of him. Quite an unsettling ending. Hopefully, we get some more answers regarding this situation in future episodes to come. I also haven’t forgotten about all the relationship drama either, I am still waiting to see what happens with Zoey and Aaron, and Doug and Jazz.