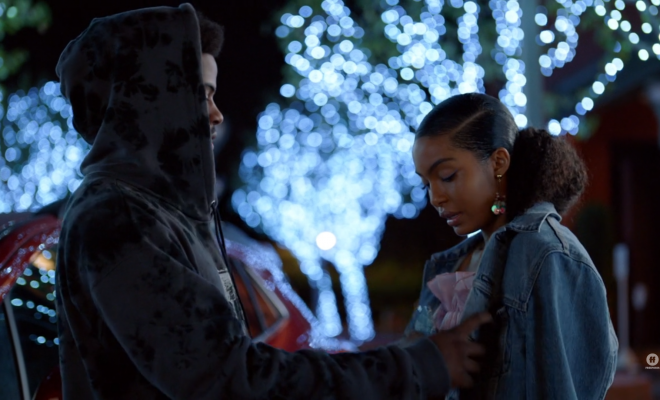 “Grownish” Season 3 Aaron’s new gf, what is Zoey gonna do?

Zoey and Aaron’s relationship over the last three seasons has been rocky, to say the least. The love triangle between Zoey, Luca, and Aaron has caused a lot of tension in their relationship in the past. There are always on and off again. They can never seem to be on the same page at the same time.

Just to quickly recap. In the first season, Zoey had a crush on Aaron. Aaron then admitted that he liked her. All good and well except for that she actually didn’t like Aaron anymore and decided to date, Luca.

Zoey and Luca date for all of season 2 until a fight over Zoey’s new career gets the better of them, and they eventually break-up. Immediately after their breakup, Zoey decides to ask Aaron to drive her to the airport for her new job in London.

At this moment she realizes what she had failed to see from the beginning, that Aaron has been there for her through everything. He has been the rock she has needed and didn’t even know it at the time. With all these newfound emotions, Zoey without thinking about it kisses him right before she boards the plane.

However, it only gets further complicated when Zoey returns to Cal-U that fall and finds out that Luca chased her to the airport. PLOT TWIST. Zoey yet again is confused over this whole love triangle ordeal and doesn’t know what to do. Looks like she is back at square one.

She slips up and hooks-up with Luca one last time before calling it quits for real this time.

Meanwhile, Aaron and Zoey’s friendship has been pretty good so far. Aaron even asks Zoey for a favor to help him get a job at her father’s company. Zoey being Zoey is totally stuck in her own world and forgets to do the one simple favor Aaron asked of her. At this point, he begins to recognize just how one-sided their relationship has been from the very beginning and decides he needs some space from her.

But Aaron can never seem to stay mad at Zoey for long and he shows up to her 21st birthday party. Zoey, in-state crisis, asks Aaron for advice and support, like always. And like always, Aaron pushes his needs aside and gives her advice even though she often takes him for granted.

After their talk, she’s enlightened. She decides that she is quitting Cal-U to focus on her career full time. And before she leaves, she runs into Aaron, and they kiss goodbye, complicating things once again.

This takes us to the current moment. Zoey just finishing up a shoot in Miami and decides to text Aaron. In the message, she divulges her true feelings. Aaron responds by telling her that he wants to hook-up when she gets back to Cal-U. Zoey is ecstatic by his response, but it turns out they do not have the same understanding of the phrase “hook-up”.

Because when Zoey heads back to Cal-U to see Aaron, she finds out that he has a girlfriend. Looks like they, yet again, are not on the same page.

Zoey and Aaron go outside to get some fresh air and to try and clear up the misunderstanding. Aaron finally buckles down and admits to Zoey how he truly feels about their relationship dynamic. I mean he does not hold back.

He tells her how when he received the text from her,  it was everything he had ever wanted to hear from her during the last three years. He put himself out there so many times to just always end up being rejected. Aaron confesses how he is tired of her inconsistency and is terrified that if he puts his heart on the line again that he will get played. He finally tells her that he can’t trust her with his heart anymore. And that is where their relationship has left off at this point.

It is evident that Aaron has been feeling this way for a very long time. Zoey in the past has often put her needs in front of his, never considering how he felt. He has bent over backward to accommodate her every need, but could never give him a straight answer. And when she would insinuate that she had feelings for him, it always came at the wrong time and never actually turned to anything.

Is this the last straw for Aaron? I mean that was a pretty rough rejection. Can they even be friends at this point? Regardless, their relationship, whatever is left of it at this point, will never be the same after this talk. I am interested to see what future episodes hold and if they can start to mend and repair their relationship.