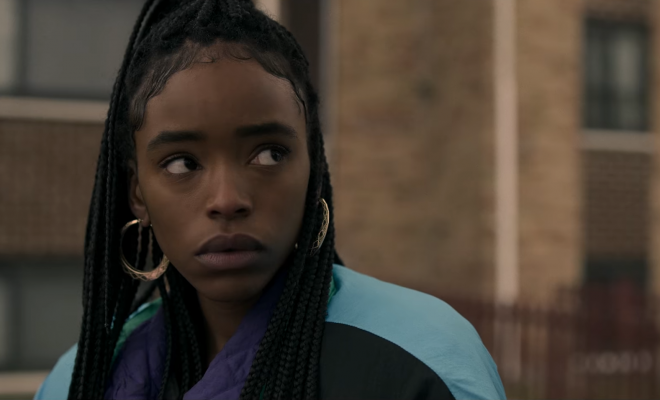 Like many great shows on TV, Power Book III: Raising Kanan features an ensemble cast of many memorable characters. One of these characters is Davina Harrison, the first girl Kanan Stark ever had feelings for. This will be an ongoing character breakdown of Davina over the course of Raising Kanan.

Davina was first introduced as not only being Kanan’s crush, but also the girlfriend of Buck Twenty. Buck was a member of Unique’s crew, who’re in opposition to Raquel and her crew. In Episode 1, Kanan and D-Wiz shoot and kill Buck to protect Raq’s territory.

Buck’s death seems to hit Davina pretty hard, so much so that she gets into a fight at school with a girl talking bad about him. Unaware of his involvement in Buck’s death, Davina and Kanan begin to get closer afterwards. Kanan’s kindness in her time of need sparks a romance between the two, one that likely won’t last long. If Davina finds out that Kanan killed Buck and didn’t tell her, she will certainly cut him out of her life for good.

On top of her boyfriend being killed, Davina also must deal with her difficult home life. With her drug-addicted mother unable to handle it, Davina spends much of her time watching her baby sister. She is left to constantly worry for her mother’s well-being due to her addiction. This fear for her mother’s safety is what allows her to become easily exploited by Unique.

Buck’s former boss learns about Davina and Kanan’s relationship and uses it to his advantage against Raq. In exchange for help finding rehabilitation for her mom, Davina tells Unique about the stash house Kanan was at. Although her choice is understandable given her circumstances, it also almost got Kanan killed by Unique’s men during their attack on the stash house. It remains to be seen just how Davina will react to this news, but I imagine she’ll feel a sense of guilt over her actions, however understandable they are.