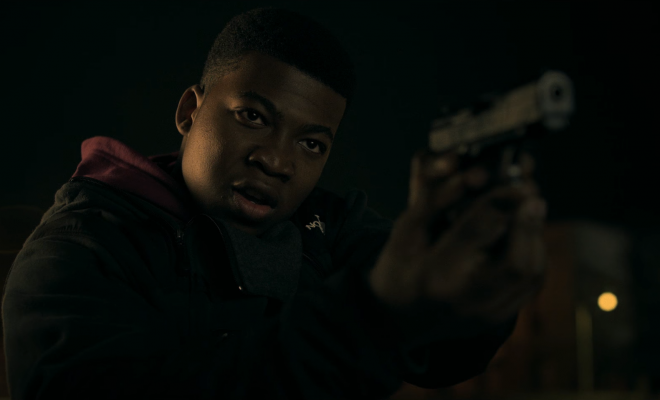 Throughout Power’s six season run, Curtis “50 Cent” Jackson brought the villainous character of Kanan Stark to life. He was a character who we loved to hate and hated to love. Kanan’s character was so well received that he is now the subject of his own prequel series, Power Book III: Raising Kanan. Kanan’s character development is sure to be one of the most important in the series moving forward. This will be an ongoing character breakdown on Kanan Stark as we see him go from being a conflicted kid to a remorseless killer during Raising Kanan.

Many of Kanan’s actions this season have been in relation to his relationship with his mother, Raquel Thomas. He killed Buck Twenty in a misguided effort to protect her territory and he failed the school entrance exam so he could stay with her. Kanan clearly loves his mother very much, and would do anything for her. And apparently, that includes entering the violent drug game.

But who knows how long that love will last. Raq is responsible for the death of Kanan’s friend D-Wiz, who was killed by Lou-Lou in order to protect Kanan after he killed Buck. It remains to be seen how much kana suspects Raq’s involvement in D-Wiz’ death, if at all. Kanan is shown to be incredibly intelligent, but intelligence is often blinded by emotion. Either way, this revelation is sure to create a major rift between Kanan and his mom down the line.

All in the Family

Aside from Raq, Kanan also appears to be close with the rest of his family. Specifically with his two uncles, Lou-Lou and Marvin, and with his cousin Jukebox. We saw this when the five of them went out for a family meal together. Also, Kanan and Jukebox both were comfortable enough to use each others’ house keys in the third episode.

Despite this closeness, there is an unacknowledged tension lurking beneath the surface of it all. Kanan killing Buck has upset the power dynamic, and those close to him may decide to try and exploit this in the future. If this were to happen, it would likely begin Kanan’s distrust and hatred of being betrayed.

Love Can Get You Killed

Kanan has feelings for Davina Harrison, who was Buck Twenty’s girlfriend before he was killed by Kanan. Despite this, the relationship between Kanan and Davina is somewhat sweet. Kanan said that he’s had a crush on her since 2nd grade, so Davina seems to be Kanan’s “first love”.

Kanan said that he killed Buck to defend Raq’s territory. But Kanan already had greatly resented Buck due to his relationship with Davina. Was this part of the reason that Kanan killed Buck? Did he just use turf wars as justification for killing the target of his hatred and jealousy?

Personally, I think this is the case. Kanan may not even realize it, but killing Buck was likely at least partially motivated by envy. But it wasn’t until after he watched him die that Kanan felt the weight of taking a life.

For Davina, she does seem to care a great deal for Kanan. But things often aren’t what they appear to be, especially during power struggles. Could Davina be using Kanan as just another pawn in the deadly game of chess he’s found himself in? Even if this isn’t the case, Davina learning the truth about Buck’s death would surely sever that relationship in an instant. Either way, the two of them are together on borrowed time.

During Episode 4, our suspicions about Davina came to pass. After seeing Davina and Kanan together, Unique used their relationship to his advantage against Raq. In exchange for help finding rehabilitation for her mom, Davina tells Unique about the stash house Kanan was at.

Kanan likely won’t be happy when he finds out about this. Unique’s men almost killed Kanan during the stash house attack and he would want to know what caused it. But will he forgive Davina for her betrayal? The two of them both have secrets that they’re keeping from each other now, and it won’t be pretty when they come out.