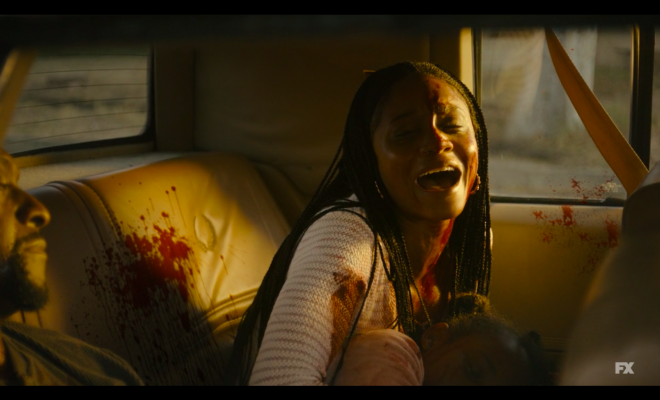 We’re back with another breakdown! This time we’ll be evaluating Season 4, Episode 4 of Snowfall and it looks like we’re finally getting to real some action.

The episode starts off with Wanda who is out looking for her next fix. I was pretty disappointed because I really thought she had a revelation in last week’s episode when she looked in the mirror and didn’t even seem to recognize herself as she pulled out her own tooth. I guess that moment didn’t scare her straight after all, so maybe we won’t be getting a Clean Wanda any time soon.

This scene gets serious real quick because as Wanda is trying to find her next fix, she arrives just in the nick of time to save Leon’s life. Wanda calls out Leon’s name alerting him to the approaching drive-by that Skully and his crew are ready to unleash upon Leon and his crew. But unfortunately, she gets caught up in the mayhem and takes a hit from one of the bullets.

Franklin goes to the hospital to check up on Leon and his people. While Franklin is there, he suggests that since Skully is after both he and Leon they should team up, but Leon is still not feeling it. Damn, Leon can surely hold a grudge. Leon, we get it! You’re your own man, but Franklin has come to you twice and said he needs you. What else do you need to know that you are valued? I mean, Leon said he didn’t want to be Franklin’s driver anymore and now Franklin has a different driver, so what is the issue now? I just want them to hurry up and bury the hatchet before it’s too late and they both end up dead.

Leon decides to take matters into his own hands as he and Fatback meet with a low-budget private investigator to get details on where Skully is at all times.

Reed, Avi, and Gustavo discuss some delays in his gun shipments. It seems like Avi has nothing but bad news and delays these days and he may need to be dealt with in a more permanent manner if he continues to fall short on his end of the bargains.

Meanwhile Cissy, Franklin and Paul discuss major investments to start making more legal money. Franklin runs into a hiccup at this meeting as Paul all but tells him “You’re money is dirty and I’m not trying to get caught up in your mess when the cops come knocking.” And of course Cissy reassures Paul that before the money ever makes it into his hands it has been cleaned ten times over and is nowhere near traceable back to its origin.

Later, Cissy revisits the promise Franklin made to her which was the sole reason why she allowed herself to be pulled into his “business”. He was supposed to be planning a clean break and she wants to know if that is still the plan and when Franklin plans on making that happen.

And if there is one thing Franklin is going to do, he is going to listen to his mama. He might not show it or act immediately but he listens. His conversation with her prompts Franklin to call a meeting with Reed to see when the government will be done with their initiative which would lead to the end of Franklin’s cocaine pipeline. That would be a great place to start in giving Cissy a timeline for his exit. Unfortunately, that isn’t information Reed has or can give at the moment.

Franklin takes this information or lack thereof and decides that the next best play is to expand quickly. I think he is trying to get as much cash as he can to set himself and his family up before things take a turn for the worse. The problem is that expansion will mean more of what Franklin is currently experiencing but in more places all at once. Are you sure you are ready for that, Franklin?

In a random turn of events, Lurp decides that this is the end of the road for him and quits. He gives Franklin a quick speech about not being able to take the bloodshed and seeing people killing each other in the streets. Despite Franklin’s best efforts, he is unable to convince Lurp otherwise.

Tony Marino, the man that Irene has been looking for, finds her in her home the night that she is thrown out by Alton after snooping around the shelter again. Alton is no fool and can sense that she is up to more than what she says and he wants no part of it. Tony gives her the golden ticket that not only sets her up for a phenomenal career-making story but gives her all the details that she needs to know about the real story: the US government has been bringing drugs into the US to fund the wars they are fighting on foreign Central and South American soil. This is way bigger than Franklin Saint. However, Irene will have to corroborate all of the information Tony provides on her own because according to Tony, this meeting will be the last one they ever have.

And just when you thought the episode was eventful, dramatic and jam-packed enough we get to see Fatback, Leon and friends staking out Skully’s grandmother’s house hoping to find him there and take him out. I really wish they could have done this somewhere else. Come on, his grandma’s house?

Some of Skully’s crew ride past and see Leon’s crew and from there it is on! Leon is able to make it out alive and with the exception of one person he kills everyone else in the car, including a child who dies in her mother’s arms. This might be the moment that changes Leon forever because he is really shaken up by this.

And it turns out the child Leon killed is Skully’s daughter. Looks like this beef just went from bad to gasoline-powered dumpster fire real quick. Skully crucified a dude for shooting his homie so we have to wonder what he is going to do Leon for killing his daughter?

We’ll have to see in the next episode because that’s all I have for my recap of Season 4, Episode 4: Expansion. You can also check out the full video recap of this episode below!

Now it’s your turn! Let me know what you all think in the comments down below! What do you think is coming next?