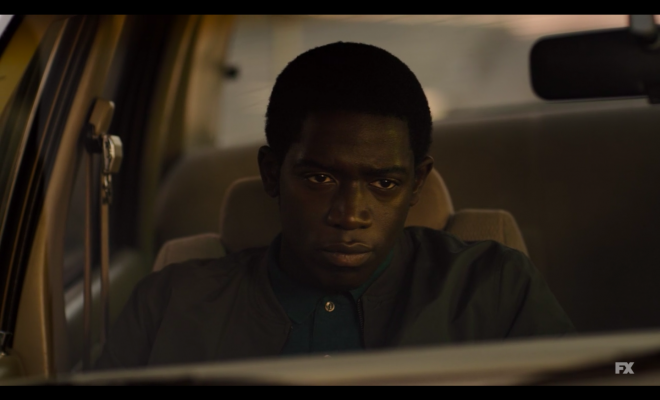 We are now three episodes into Season 4 of Snowfall and it just gets more and more interesting. Let’s talk about it!

Things come to a head with Franklin and Officer Nixon after word gets back about Nixon rolling up on Franklin’s dad at work. Franklin meets up with him to set him straight and let him know they’re going to continue working at the rate that they originally discussed. He also tells Nixon that there will be no more pop-ups and he strongly advises that Nixon no longer steps out of line. Franklin reminds him the moment Nixon took the money he really stopped having leverage over him and he is right!

So much of the start of this season had Franklin looking like he was only playing defense and trying not to go under, but this is a moment where we see Franklin switch to offense and really show that he’s still a very big dog and everyone should fear his bite!

This meet-up obviously didn’t sit right with Officer Nixon because he then arrests Cissy pulling her out of the home right in front of Franklin and Alton because Nixon claims she had a complaint filed against her. He drives her to Andre’s gravesite and tells her that Franklin killed Andre. However, this is something Cissy already knew without anyone needing to tell her, including Franklin.

Big mistake on Officer Nixon’s part because Franklin’s new political connections help him deal with Officer Nixon going rogue in the best, above board way possible. He gets him transferred and silenced because if Nixon speaks about what he knows he will lose his job.

This scene definitely had me on the edge of my seat. I thought something way worse was going to happen to Cissy. But one thing we’ve learned since watching the show is that you don’t mess with Franklin’s family if you know better! So, it was definitely satisfying to watch Officer Nixon get the boot after he messed with Cissy like that.

Franklin and the Mosleys

I personally never thought Franklin would be the type to con anyone in the neighborhood, but he did what he had to do in the best interest of the business. Franklin and Cissy have been in the process of getting their real estate business off of the ground and unfortunately, Franklin had to trick Mr. and Mrs. Mosley into selling their family-owned bookstore as a part of that effort.

Franklin used his charm and his familial connections to make them believe he just wanted to invest in their business so that they would be able to stay afloat since they were already being threatened with foreclosure or having the property taken from them by the city. But it turns out Franklin just needed that particular property to increase his political leverage with Paul Davidson, so he sold the property to Davidson in order to solidify their union. Of course this upsets the Mosleys as this was a bookstore that has been in their family for the last 30 years, but Franklin reminds them that they were going to lose the store regardless.

Honestly, I don’t know how I feel about this. Even though they were going to lose that place anyway, Franklin paid double market value for it, and he’s getting them a new location, I just don’t like the way he handled everything. It was definitely very shady. This introduced us to another side of Franklin too. I feel like we are just pulling back layers but it also feels like new layers are developing as we continue to get to know Franklin because he’s completely different from the young boy that we met in Season 1.

It looks like Leon and Fatback are doing their best to keep money coming in with their current drug supplier and we see that Leon is struggling. I need him to go back to Franklin and for the two of them to stop fighting because there is too much going on for them to be beefing right now.

We also get to see Wanda in this episode who is clearly still strung out. I think this large portion of the episode is dedicated to showing what goes on with Wanda when she is actually using. Then came the gruesome, bloody moment when she’s able to just pull her tooth out which is obviously a result of her drug use. We see Leon stop her from zapping out on a drug dealer because she’s short and she’s tweaking out like a drug user would. I think that we’re going to get a full story arc of Wanda and this moment was meant to preface that story.

And who knows? Mel got clean so maybe we’re about to see the Redemption of Wanda! I love Wanda and Leon together so I just really want them to figure it out.

Now time for Gustavo and Teddy/Reed (or whatever you want to call him). Gustavo is out for blood after he found his family members were brutally murdered in their home following his run-in with the border police last episode. Franklin and Gustavo are a lot alike in the way that their loyalty runs deep for their families.

That information is revealed to Gustavo in this episode as he prepares to embark on this suicide mission. He wants to bring guns to the police station and shoot it up. Teddy shows up just in time to prevent Gustavo from going through with it and in that moment he has to reveal that he works for the government. But I’m really trying to figure out how Gustavo didn’t know!

Teddy was looking to stay on his mission and keep Gustavo’s trust so he had to be a part of the plan to go and take out the policemen who killed Gustavo’s family before they could finally get back to business. Teddy calls in backup and they agree to help him and Gustavo eliminate the threat as long as they don’t kill anyone on Tijuana soil or make any noise, but Gustavo didn’t get the message because he decides to go into a strip club and send a message that sends the sheriff and his men into hiding. Unfortunately, Gustavo kills someone in the club in the process which was against the rules.

So, Reed and Gustavo have to take on the sheriff and all of his men on their own at this remote location and luckily they succeed in doing so.

In this episode we also see Irene digging really deep. She’s uncovering more of the truth in each episode and the deeper she digs, the more danger she may eventually be getting herself into.

And one more important takeaway from this episode is that Manboy wants Franklin out.

He definitely throws some shade when Louie and Jerome meet up with him to do an exchange when Manboy hints that business was better and easier without Franklin in the picture.

If I was Manboy I would just stay in my place, but Manboy is Manboy so it’s going to be on!

Alrighty y’all! That’s all I have for my recap of Season 4 Episode 3: All the Way Down. You can also check out the full video recap of this episode below!