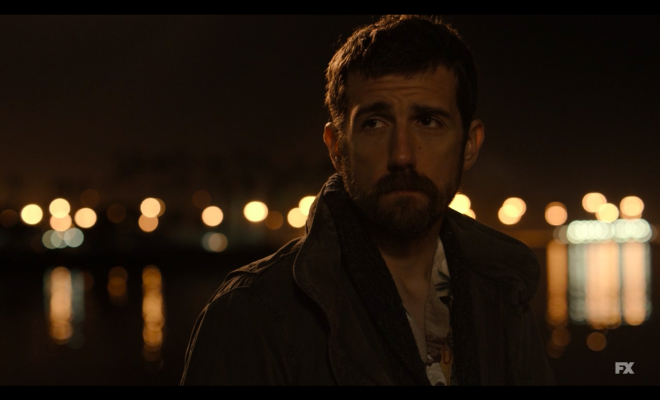 The long awaited return of John Singleton’s crime drama Snowfall has arrived and I can’t begin to express how excited I am to see Franklin Saint again! Let’s talk about Episode 1.

The episode opens with Franklin Saint struggling to put on a suit and then reading a birthday card from Mel. Later, Franklin meets up with Aunt Louie at one of their fronts. She briefs him on their current operation and what will be going on as of now. The community is literally a dumpster fire since the crack epidemic has taken over and Franklin and his family cannot keep up with or regulate the competition. The last season ended with the family fighting over Franklin coming back to lead the business and it’s clear that stances were taken since we never see Franklin’s parents with Louie and Jerome; we either see one couple or the other.

The biggest problem the family has to deal with is the ongoing gang war between Manboy and Skully. The beef comes to a head after Skully has one of Manboy’s people crucified in a neighborhood baseball field. Franklin decides to take Reed’s advice by picking a side to help one gang get rid of the other so that they can stop the war and try to maintain some kind of control…or so we think.

Reed is also spiraling as the series progresses. We have seen him go from a righteous but benched CIA agent to a covert operative to a questionable drug distributor to a down-right unreliable co-conspirator in what looks like a mission from the government that it no longer wants to be a part of. I need to go back and look to see why he has stopped flying the drugs in but issues are starting to present themselves within his pipeline. Gustavo is working on digging a tunnel which will certainly present issues moving forward, and in this episode we also see the local Tijuana police stop and search he and Reed to find kilos of coke…and of course the police want a cut.

The journalism aspect being added to the story is really going to amp up this show just like it did when it happened in the 2002 hit crime series “The Wire”. It’s one thing when corruption and crime goes unnoticed in forgotten communities and involves oppressed people but when you bring everything to the light, the whole game changes. This will also help tie in more political involvement which will interfere with the drug trade and attract more cops rather than just the dirty ones.

Eileen goes to speak with Melody and surprisingly Mel is clean! Apparently, she is saved now which is interesting. I love the Lord too but she is giving Stepford Wives realness and I don’t know how to feel about it.

Franklin and Leon break up in this episode and it’s one of the most heartbreaking things to watch because they know they love and need each other. Leon believes that Franklin is being driven by money and is no longer making decisions rooted in loyalty and hood honor. The two have not talked since Franklin was shot because Cissy wasn’t letting anyone see Franklin while he healed, but when Leon sees Gustavo at Franklin’s New Year’s Eve party he feels like Franklin is picking business before bros. Regardless of how the situation with Kevin went down Leon is gonna stay loyal.

Now is a time for Franklin to press pause and really talk to his dawg Leon because he is going to need him. Even though there are a lot of new faces in their crew, new faces aren’t always true faces. But I believe no matter what loyalty and love are going to keep Leon in Franklin’s corner and Franklin needs that. Leon does have his own issues with his pride and ego which are Franklin’s main issues with him but I feel like everything they are going through can and should be worked out by simply talking. Lately it seems like things are going to get a lot worse before they get better and loyal people in your crew can be the difference between life and death in Franklin’s line of work.

Honestly, I think Franklin wants out. He is doing what he feels like he has to but in that scene where Alton is trying to get Franklin to stay in with him and watch movies like old times, you can literally see the wheels turning in Franklin’s head as he considers what would happen if he just walked away from everything? I believe that’s where the tears came from because he really wants to finish what he started, fix some issues, and stop some things that he set in motion when he brought crack to the hood. He just has the heavy crown of duty and loyalty weighing on his head right now and you can see it is taking its toll.

But let’s have a brief moment of silence for Damson Idris who is absolutely masterful in this series! This role was made for him. I have chills.

Now it’s your turn! Tell me what you thought of the Season 4 premiere episode “Re-Entry” in the comments section below. Do you think that Franklin is going to be able to gain control? Who do you believe Franklin is really backing? What are you looking forward to seeing most this season? Tell me all your thoughts and theories. You can also check out the full video recap of this episode below!