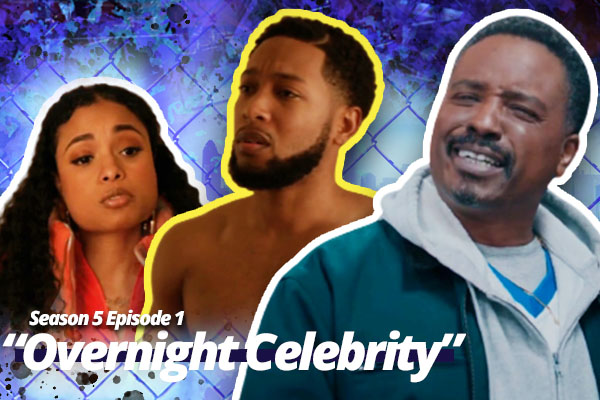 The terrible trio that became the fidgety foursome is now the fierce five as we catch up with Papa, Jake, Kevin, Jemma, and Lynae at the top of the episode. Jake and Jemma are seemingly still going strong until midway through the episode, when we learn that Jake is struggling with his place and purpose. He is pursuing a spot on the varsity basketball team but not because he is good at it because he wants something to call “his thing.”

A fight breaks out at R.O.C.K, forcing Trig, Shared, and Tracey to jump in, pulling Ronnie’s murderer off of another corner boy who happens to be beefing over territory. Locations that don’t even legally belong to these young dudes make for the perfect entry for the scared straight speech and big brother steez Shared, and Trig has ready to go. They are on the straight and narrow and working as community organizers and leaders this season, and we love to see it. After attempting to block Trig from bringing the murderer into the community center as a volunteer, we see Tracey brought to tears thinking about the deaths of both Ronnie and Coogie.

Nina and Dre seem to be in a great place and back to normal at the start of this season. Nina is stressing about Keisha wanting to move out and on-campus with baby Ronnie as Dre fully supports her branching out.

Four seasons ago, you couldn’t tell me that Emmett and Darnell would find their way back to each other, cultivate a strong and supportive father-son relationship, and be doing life together. The heart-to-heart that turns into the drunken confession session between Darnell and Emmett is therapeutic and captivating. Darnell still doesn’t have the whole father thing figured out but watching him do the best he can with his oldest feels like a win for everyone. Darnell is supposed to be here to help Emmett figure out how to get Tiff back, but instead, he is pushing the “F*ck Tuff” narrative and reveals how he had to think about Nina just last night to finish while smashing Dom. Both Darnell and Emmett are with or fighting for the wrong women, and this can’t help like anything but foreshadowing. At the top of the episode, we saw Emmett sleeping with Keisha, which turned out to be a perfectly sensual sex dream.

How Jasmine’s exit is addressed

Though Trig and Shared start the episode on a high, breaking up the youth fight, their most gripping scene follows with them at a jewelry store as Trig picks out the perfect ring to propose to Imani. While they wait for the right, we get back the story on the fellas and their relationship as Shared opens up about how vital Trig, Imani, and their family are to him and the many dirty deeds he has been there for and seen Victor do in the past. Yes, Trig’s real name is VICTOR! It’s the black boy’s love and joy for all of us. By the end of the episode, we watch Trig hit with the waves of rejection as Imani decides to stay in St. Louis with her mom after watching the video clip of Trig retaliating against the young boy that broke his G-wagon window. Though we could anticipate something since the actress Jasmine Davis, who announced she would not be returning to the show earlier this year, also did an interview with “Talk To Me” on June 16, 2022 to dive deeper into her experience on the show and reasons for exiting. Imani quickly became a fan fave when introduced in Season 3 of “The Chi.”

Jada and Suede aren’t moving in sync as he wants to move in, and Jada still wants her space.
What Jada and Darnell are missing in their current relationship becomes super clear after he shows up to fix Jada’s shower head, and they end up kissing. Darnell is sober now, but he is still speaking drunk thoughts when he proclaims that Jada was the one that got away. If Suede felt like their relationship wasn’t moving forward before the iceberg, Darnell will probably be the thing that sinks them this season.

Jemma and her dad, on the mend and in great spirits, have a quick but utterly amazing conversation lead but his unwillingness to let her not express herself. He communicates precisely how he wants their relationship to be, bigger than father and daughter and more connected than what feels obligatory. For a split second, I was little Erica, wishing my mother or father had been knowledgeable in this parenting style. Though brief, I expect to see more moments and conversations like this sprinkled throughout this season.

Papa is feeling himself a lil too much as he is supposed to introduce the basketball team at a school rally but instead takes the opportunity to call out Jake and embarrass himself, vocalizing his limited life view and judgment of fatherless homes.

Tiffany is on to the next… Emmett who?

Tiffany decides to leave her and Emmett’s apartment because she is still on the “I need some time” ish that is sending Emmet reeling all episode. Not too long into the episode, we learn exactly where Tiff is as she tells drunk Emmett that she doesn’t know if she wants to be his wife anymore. She says she is struggling with the idea that Emmett only married her because he was scared, and after learning he slept with Dom, things changed completely, but it feels like Tiff got a taste of freedom, a few Emmettless orgasms, and doesn’t want to give that up. This break-up feels less about Emmett and more about her finding herself outside the choices she made when she was a different person.

Speaking of finding oneself, that seems to be the theme for most of the characters this season as they all struggle to define themselves, differentiate themselves, know themselves, and love themselves.

Before the episode ends, we see Tracey checking a bold Quentin and softening quickly at the sight of Otis, who says, “I came back for you.”
The episode threw us back in the saddle for another wild ride through “The Chi.” Poised with all the info we need to move forward at peak interest, we can’t wait for Episode 2 to premiere.

Also available on Amazon in Blue, Orange and Green.

Drop your thoughts in the comments on the episode and check out our video breakdown on #EricaVainTV. New episodes of “The Chi” drop on Showtime every Sunday night at 9pm EST

This post may contain affiliate links that help us monetarily support the site and other Erica Vain content. Making purchases through these links will not cost you anything extra and does not affect the recommendation or review of linked products and services. All thoughts are my own and your purchase through our affiliate links help support the content. Thank you!