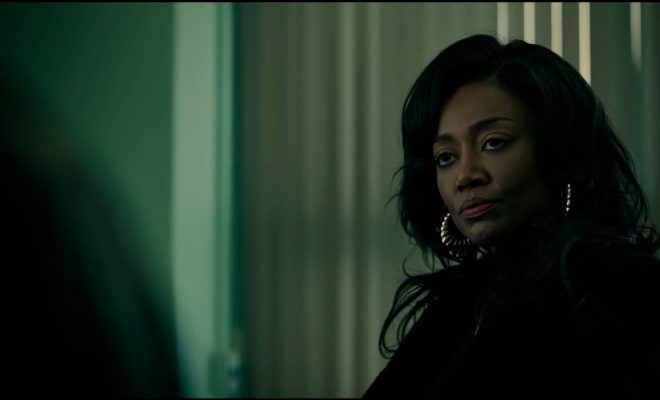 This Article was updated on August 7, 2021 by Riley DeBoer

When STARZ announced that the Power universe would be expanding in the form of four new spinoff series, the one that arguably stood out the most was Power Book III: Raising Kanan. While there were multiple reasons for this, one of them was the title of Raising Kanan.

But this title is more than just a pun on the fast food restaurant, it also accurately describes what the series is about. The series is just as much about Kanan as it is about the people who raised him. And nobody was more influential in Kanan’s upbringing as his mother: Raquel “Raq” Thomas. This will be an ongoing Character breakdown of Raquel Thomas throughout Power Book III: Raising Kanan’s first season.

All Hail the Queen

Ruthless, powerful, and intelligent, Raq embodies many of the traits that her son will one day embody. For Raq, these are traits that have proved quite useful in continuing to hold onto her power in South Jamaica, Queens.

In the midst of a turf war with rival Unique, Raq is willing to do whatever it takes to make sure she’s the one on top. But this position comes with a target on your back, which will certainly draw the aim of rival gangs, crooked cops, and even potential treachery from the inside. Even if Raq makes it to the top, she’d better know who she can trust when she gets there.

But what sets her apart from the Kanan we saw in Power’s original run is her love for her family. One of Kanan’s most infamous moments in Power was the moment where he murdered his own son in cold blood. This moment cemented Kanan as being willing to do whatever it takes to protect himself and punish those who are against him. Now, let’s compare this to Raq’s actions in Raising Kanan.

Aside from an isolated incident of dog murder, we’ve only seen Raq responsible for deaths that serve to protect her family, specifically Kanan. One example is after Kanan kills Buck Twenty, which breaks the truce that Raq established with Unique. To protect her son, Raq orders her brother Lou-Lou to kill D-Wiz (who was with Kanan when Buck Twenty was killed) to make it seem like he was killed out of revenge for Buck. By using D-Wiz as a scapegoat, she protected her son from facing the deadly responsibility of his actions.

This doesn’t mean Raq’s actions are benevolent by any means. Not only did she order her own brother to kill a close friend of Kanan’s, but she even visits D-Wiz’ mother to show her support. This scene speaks for itself, as Kanan and D-Wiz’s mother are tearfully grieving, Raq holds their hands without shedding a single tear.

In spite of her desire for power, Raq still wants to find love just like the rest of us. She begins to find that this season in the form of Symphony Bosket, a bartender working towards a Masters degree in Urban Planning. Although the two of them lead very different lives, Raq and Symphony find a connection with one another due to their mutual intelligence (and, you know, because they’re both attractive).

Whether or not this relationship is purely casual or something much deeper remains to be seen. But, as of now, all signs point towards deeper feelings being developed, at least on Raq’s side of things. We see this during her conversation with Jukebox in Episode 3, where Raq says that she’s beginning to fall for Symphony.

As for Symphony, it’s pretty likely that similar feelings may be developing on his end. But there is still so little we know about him and his true motivations, if he even has any beyond what we know. But like Kanan said, “Love can get you killed”. We’ll be sure to update this Character Breakdown if more is revealed about Symphony in the coming episodes.

Be sure to keep an eye out for any updates to this article and more Power Book III: Raising Kanan Character Breakdowns in the future. And if you haven’t yet, check out all of our YouTube channel, where we post regular Raising Kanan coverage all week.