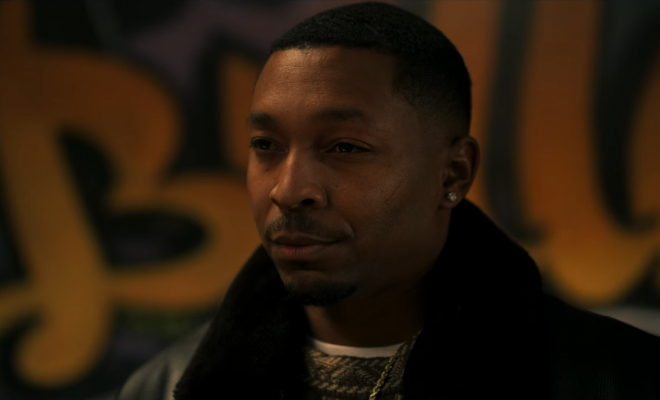 Spoilers ahead for Episode 5 of Power Book III: Raising Kanan, along with potential spoilers for the rest of the Power Universe.

The previous episode of Power Book III: Raising Kanan was probably the strongest of the series so far, thanks to solid pacing and intense action. In comparison, Episode 5 is rather low-key in terms of tension, but this is to be expected (although last week feels much more like a mid-season finale than this one). But how does this episode fare as a whole? Let’s take a look at Episode 5 of Raising Kanan and find out.

Coming off of the disaster that went down at the stash house, Kanan’s attempt to hide his involvement there was bound to fail eventually. Sooner or later, Raquel was bound to find out that Kanan was there, especially after she found his blood-covered shirt. I just didn’t expect Raq finding out to literally be the first thing that happens in Episode 5. With the stash house attack being such an exciting and memorable scene, it does feel a bit underwhelming for Raq to just immediately learn all about it.

But Raq doesn’t really do much with this revelation beyond scolding Kanan and Marvin, which she’s done plenty before. Instead, she spends most of the episode planning for the war with Unique that apparently hasn’t started yet. You would think the stash house attack would be reason enough to declare war. But if Raq is gonna react the same to that as to Kanan’s grades, then I guess it just wasn’t a big deal.

Unlike his mother, Kanan wants to find out who’s responsible for telling Unique about the stash house. Interestingly, Davina is nowhere to be seen in this episode despite her being the true culprit. Jukebox suggests that it indeed could be Davina, but Kanan angrily shoots this down. I’m a little confused as to how Jukebox managed to figure it out, but whatever. This sends Kanan on a bitter quest to take care of Scrappy, who Kanan believes is Unique’s rat.

I feel like I haven’t given Mekai Curtis the credit he deserves yet. His performance is not nearly as flashy as those of his castmates, or even 50 Cent’s portrayal of the character. But Curtis delivers a subdued performance that consistently hits the ball. This episode is no exception, as he perfectly shows Kanan’s growing rage following his near-death experience.

Kanan’s anger in this episode feels like an important early step towards his Power trajectory. If the series ended with Kanan feeling nothing like his adult counterpart, then what was even the point? So I’m glad to see this episode proactively taking steps towards this point.

The Highs and Lows of Jukebox

Lou-Lou fulfills his promise to Jukebox and gets her time in the recording booth with Crown. Crown is a local music producer who I haven’t really discussed much yet. But that’s just because I always forget that he exists so let’s just move on from him.

Seeing Jukebox able to prove her skills as a singer was nice, as was her actual performance. Week after week, Hailey Kilgore continues to prove that she is by far the best performer on the show. No where was this more apparent than what will likely be Jukebox’s final time at Nicole’s house. Nicole’s mother discovers her daughter and Jukebox kissing, leading to her to be immediately kicked out of the house. After her success at the music studio, it’s so upsetting to see her fail so greatly. And Kilgore sells this flawlessly, as she shows the emotional devastation of her character experiencing her first real heartbreak.

“(Hailey) Kilgore sells this flawlessly, as she shows the emotional devastation of her character experiencing her first real heartbreak.”

One pleasant surprise of this episode was how much I enjoyed Symphony. I mentioned that Kanan being in his class could be a good direction for his character, and so far I’ve been proven correct. Seeing Symphony talk about more than concrete or whatever and actually have a real impact on the plot makes him so much more engaging. Plus, his newfound father/son dynamic with Kanan is sweet, especially considering Kanan has no other potential father figures whatsoever…

Now that I’m done lying to you, let’s talk about Detective Malcolm Howard. This episode also gives Malcolm something to do after being absent last week. After seeing Kanan and Scrappy fight, Malcolm and his partner bring them in for questioning. While trying to wear Kanan down for information about Raq’s operation, he discovers something he wasn’t expecting: Malcolm is Kanan’s true biological father.

While a past connection between Raquel and Malcolm had been implied, I definitely wasn’t expecting that it would be this. Why would Raq hide this information from Kanan and Malcolm? Will Malcolm tell Kanan the truth? With his growing need for a suitable donor, Kanan would likely be able to save Malcolm’s life. So he has all the reason to tell the kid.

While a bit underwhelming compared to last week’s episode, Episode 5 of Power Book III: Raising Kanan was a well-acted experience that serves as a worthy mid-season finale. This show’s pacing is getting better and the cliffhangers are consistently compelling. Five more episodes left in the season. Hopefully, it doesn’t drop the ball in the homestretch.

By the way, there is no new episode next week, with Episode 6 instead airing the week after. In the meantime, check out our review of the previous episode of Power Book III: Raising Kanan if you haven’t yet. Also, be sure to take a look at our ongoing character breakdowns for Raising Kanan, such as our breakdowns of Davina and Marvin.