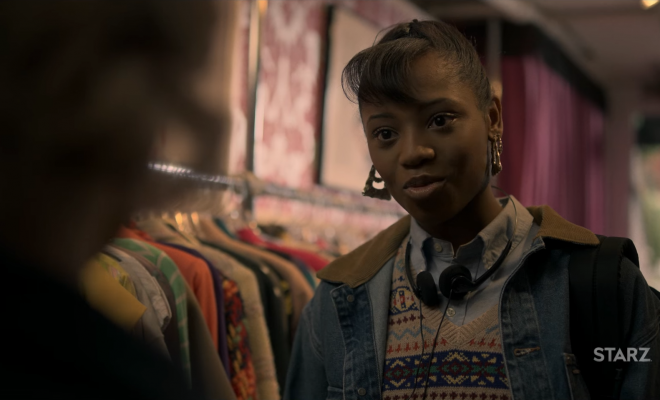 Spoilers ahead for Episode 2 of Power Book III: Raising Kanan.

Last week’s explosive premiere of Power Book III: Raising Kanan ended with the promise of Kanan being “in it” now. He killed Buck Twenty, disrupting the truce established between Raq and Unique, putting Kanan and his whole family in danger. He’s in the game now, and there’s no turning back.

But despite his name being in the title, this series is about so much more than Kanan Stark. It’s also about the different people who are raising Kanan (Hey, that’s the name of the show!). They all have their own goals and motivations that make them just as important to the series’ story than the titular lead. This episode in particular shows off the importance of Raising Kanan’s ensemble cast, with many of them playing major roles compared to last week.

But the cost of this is that Kanan himself has very little to do in this episode, something that he would certainly agree with. Raq told Kanan that he was “part of it now”, but the importance of this isn’t really explored to its full potential, at least not yet. Although she explains that Kanan being put on guard duty is necessary to learn discipline, it just feels like Raq is still trying to shelter her son from the world she lives in. And, to be honest, it also kinda feels like the writers didn’t quite know what to do with Kanan this episode and just needed to put him in a narrative timeout for a bit. Hopefully Kanan will have much more to do in future episodes and doesn’t end up being overshadowed by his supporting cast.

Surprisingly, the two characters who I feel were the standouts of the episode were Kanan’s Uncles Marvin and Lou-Lou. Marvin in particular surprised me with how much I found myself invested in his strangely endearing romance with club publicist Toni Deep by the end. I didn’t even think we would ever see Toni again after Raq had her dog microwaved, so the idea of a connection between her and Marvin in the future was anything but expected.

But the obvious big moment of the episode was when Lou-Lou killed D-Wiz. I could tell that D-Wiz was a dead man walking from the moment he stepped foot into Lou-Lou’s car, but that still didn’t make his death any less impactful than it was. The remorse Lou-Lou showed after killing him shows that he is imprisoned by his own loyalty to Raq, and he knows it. I’m looking forward to what comes of this in the coming episodes as more pawns continue falling from the table.

I really want this series to work on developing Jukebox’s relationship with Nicole, because right now it’s really not as strong as it could and should be, especially given its importance. Tony nominee Hailey Kilgore is doing a terrific job as Jukebox, with her song at the end being a standout for me. But the two of them simply lack the on-screen chemistry to be all that compelling, which is a shame because I genuinely want to like their relationship more. But the fact that I came out of this episode more invested in Marvin and Toni’s relationship than Jukebox’s is a problem that needs to be fixed.

I think that Episode 2 of Raising Kanan is a good episode with a great ending, but it is unfortunately brought down slightly by its slow pace. The momentum from the previous episode is quickly brought to a halt and it doesn’t return until the end of this one. The events that occur here are quite compelling, but I just wish that the stuff happening in-between was as well. The ending promises some very compelling events in the coming episodes, so hopefully it delivers on this without sacrificing the bullet-fast momentum it has right now.

Let us know what you thought of the episode in the comments below and be sure to share on your favorite social media site if you agree!

If you haven’t yet, check out our review of the previous episode of Power Book III: Raising Kanan. And if you like POWER, I think you will also love SNOWFALL and POWER BOOK II: GHOST.

The TRUTH may KILL you SOPHIE... Can BADEN save her?| APPLE TV+ SURFACE SEASON 1 EPISODE 1 BREAKDOWN
YouTube Video UCwsEBnYPDGhlF7IrbNTLKaw_UAcTsA7QHL4