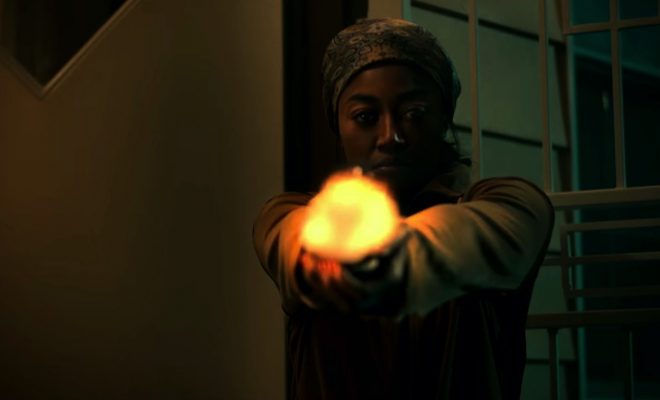 Spoilers ahead for Episode 1 of Power Book III: Raising Kanan, along with spoilers for the rest of the Power Universe

To truly understand someone’s story, you have to see how it begins…

One of the biggest dilemmas that prequels face is how they can surprise their audience when they already know how it ends (or at least they think they do). It can feel like there is no sense of tension when you know that certain characters are guaranteed to survive since they aren’t dead in the source material. When Qui-Gon Jinn and Obi-Wan Kenobi are first introduced in Star Wars: The Phantom Menace, for example, we know that at least one of them is making it out alive (and the other probably isn’t).

The Perils of a Prequel

This is the predicament that Power Book III: Raising Kanan faces as it begins its first season. We saw the titular lead character get killed during Power’s fifth season. So when somebody points a gun at Kanan here, we know that he’s not in any danger of being killed. (I’d say that Kanan’s name being in the title would also mean that he’s safe, but Ghost’s name is in Power Book II, and I’m pretty sure that guy is dead.)

So how do you make a prequel have dramatic tension despite the characters’ plot armor? The first thing to do is to surround these characters with several unknown factors. Raising Kanan successfully accomplishes this through a cast of many likable characters who are already quite memorable despite their limited screen time. From Kanan’s best friend Famous Figueroa to his brutal yet loving mother Raquel Thomas. Raising Kanan’s ensemble cast is so compelling you wonder why you haven’t heard about them before. But then the dread starts to set in and you ask yourself once again: Why haven’t we heard about them before?

The absence of these characters in Power is deafening, raising the tension to an upsetting degree as we are left to wonder whether or not the majority of these characters make it out alive in the end. But given this franchise’s track record, their odds aren’t looking so good…

The second thing to do in order to make a prequel work is to focus less on the “What happens” and focus more on the “How it happens”. When we first meet Kanan in this episode, he is far from the man we see in Power. He is a smart but kind boy who loves his family. But hidden amongst that is a spark of the brutal killer we know him as.

What this creates is something of a tragedy, as we begin watching Kanan go from a boy scared of losing his mother to one day murdering his own son in cold blood. Mekai Curtis played Kanan’s internal conflict. The former Disney Channel actor delivers a commanding leading performance that shows both the conflicted kid he is and glimpses of the man he is destined to become.

In addition to being a prequel, Raising Kanan is also a period piece. The first episode captures the aesthetic of the early ’90s excellently. From the Street Fighter arcade machines to the music we hear throughout, this episode manages to represent its time period without being overbearing. (I mean, at least I assume it does since I wasn’t actually alive in the early ’90s. But my point is that the references never distracted me from what was happening.)

Speaking of music, this leads me to one of my complaints about the episode. There were a couple of points where I felt that the episode’s score distracted me from the scenes. The most noticeable example for me was the scene between Jukebox and Nicole, where I felt that what was supposed to be a sweet moment was somewhat lessened by the score’s lack of subtlety.

From the Street Fighter arcade machines to the music we hear throughout, this episode manages to represent its time period without being overbearing.

Additionally, I felt that the episode suffered from not enough “show, don’t tell”. Many of the characters would simply explain who they are and what they are doing instead of simply showing us. Not to say that the dialogue wasn’t any good, because it was. It just was plagued with being a bit too exposition-heavy.

Despite these criticisms, Power Book III: Raising Kanan’s premiere episode was an intriguing and entertaining introduction to the origin of one of television’s most iconic villains that managed to avoid the pitfalls that often will hurt many prequels.

Let us know what you thought of the episode in the comments below and be sure to share on your favorite social media site if you agree! If you like POWER, I think you will also love SNOWFALL and POWER BOOK II: GHOST.