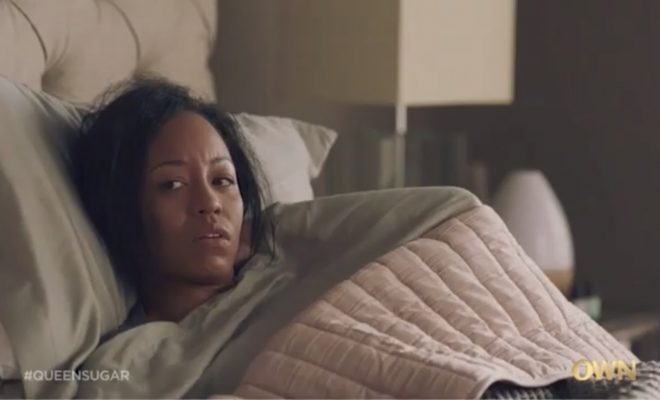 Y’all Queen sugar is not done with us yet usually the episode starts off this season at least with Ralph Angel or Ralph Angel and Blue or Darla but in this episode we actually start off with just blue and he’s actually having a nightmare about the incident that they had with the police officer and what would happen if it would have gone awry oof it definitely set the tone let’s talk about episode 8.

The episode continues with the intensity as we see Charley seeming like she’s having an anxiety attack but then we learn that she believes that she actually has Covid-19. She suffers through a breathing seizing episode in which she cannot breathe, last episode we saw that she called Davis for help after she couldn’t get ahold of Ralph Angel. She didn’t want to call and she was really just trying not to bother anybody but Micah is in Minneapolis protesting the murder of George Floyd so she has no one else to turn to so she turns to her ex-husband Davis West. Who shows up in this episode and it’s really interesting to see how he rushes to her aid I’m wondering if we’re going to see their relationship start to redevelop I kind of always wanted this, like I totally think that he was horrible right. When the series started we learned exactly why Davis West is trash you’re trash adjacent but I always was kind of wondering in the back of my mind if there will be a story around his Redemption arc especially after Charley and Remy didn’t work out so we’ll have to wait and see.

Chile I cannot with Darla’s mother she is finally back pushing this agenda of taking blue to DC removing him from the house with Ralph Angel and Darla so that he can go to this gifted school and honestly I just feel like it’s her backhanded way of saying I can parent this boy better.

She has one of the most messy toxic mothers ever and I know that she thinks she’s trying to do what’s best for her daughter the same way that she was trying to step in when Darla was struggling with her drug addiction and when Ralph angel had Blue full-time but her mom is just chile. Let’s just leave it at that a mess!

As the episode progresses we see more of Davis showing up for Charley. He even goes as far as to say when you love someone you show up and Charley doesn’t say it in the moment, but I can’t help but wonder where were you when you were leaving to show up for your family where were you when you were having a baby out of wedlock and hiding that baby for like 12 years. At the start of the series he has a whole kid in Texas that Charley had no idea about and he had been cheating all along and that is a part that really makes you struggle with the idea of Davis showing up in the way that he’s showing up now. It’s like this is great and Charley needs somebody to care for her and love her and he is taking her temperature, he is on her about you know getting fluids in and keeping her temperature down and her breathing and if she needs to go to the hospital not sacrificing herself but it’s like why does it have to be the dude who put her through so much pain and so much trauma to be the person now who is going to be able to put things back together and help her heal in this way.

But I can’t knock him he makes quite a few amazing points, Charley has chosen not to tell Micah what’s going on so he is still protesting in Minneapolis but Davis makes a point of like you need to give him a chance you need to give him a chance to make a choice of whether to show up for you or to stay where he is. It’s not fair that this is actually happening you’re not telling him because it doesn’t give him the opportunity to make a choice to choose you.

As the episode continues we get even more drama between Hollywood and Vy who are still bickering and y’all they were stressing me out for a while I was really getting worried they are my solid couple, they are our go to, our foundation, they show us what real love looks like. So seeing them bigger and seeing them be in such a bad place and have such tension with them is really off-putting but Vy was able to recover that. Hollywood pulls her aside after she gets into an argument with Darla’s mom and it gets a little bit intense and I didn’t think about it until he actually brings it up in reference to it being something that has to be wrong with her for her to be going so hard like that and now I’m like okay so they both got things going on.

They both might be really struggling with trauma he has his mom that passed and Vy has lost a lot in reference to her way of life that she was just settling into with her own independence and her growing business and her family is all over the place they have to stay away each other she’s used to really close gatherings and things like that and she is a strong woman who shows up for everybody but not as many people check in or check up on her so that could definitely be something that’s fueling her feelings in frustration right now.

The episode ends with Ralph Angel deciding not to send Blue to DC he’s going to stay in St. Joe with Darla and Ra because that is where his home is. I love that they actually took this whole story arc throughout this episode because we were able to see that Ra was just scared after having a police encounter and seeing what’s happening with black lives in America and having to have so many real conversations with Blue around black lives around the lives of black boys and black men he was just very, very scared of not being able to give Blue the best and not being able to protect him so he was only entertaining the idea because he felt like that would be something that will help get Blue a leg up in my life.

By the end of the episode he realizes that the best let up that he can have is to be in a family or be at home with his family with his mother with his father and his support system and they can definitely find a more challenging school system to be able to push him academically and he can get the personal and familial support that he needs as well.

Another call out I wanted to speak to from this episode is when we see the conversation with Hollywood and Ralph Angel on FaceTime they’re having their little happy hour and they actually just have some man-to-man time to really talk about what they’re feeling, what they’re thinking and what’s going on there lives.

I love that Queen Sugar creates spaces like this to have real authentic conversation and connection with black men. I don’t think that we see enough in media and I think that it really pushes the idea that black men should check in with each other or men in general.