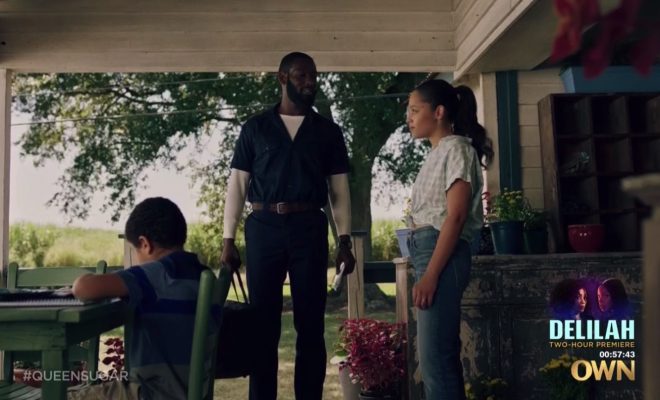 They are really giving us Ralph Angel’s happily ever after each episode. Each episode shows more and more of R.A., Darla and Blue’s life together. Even after having to take this job as a janitor at a nursing home, Ralph is not letting that stop him, he’s not letting it get him down, and he is really operating in a space of extreme optimism and pride. We love to see it.

If you recall at the start of the series we saw Ralph Angel’s dad work at the airport as a janitor to be able to make ends meet, and they all found out about it after his untimely passing that he wasn’t actually tending the land but actually working this job to make ends meet. This is something that we see resonated in R.A.’s decision to take this current job. They are in a pandemic, he’s having a sell off his equipment to try to make ends meet, he hasn’t been able to bring in the harvest; it’s beautiful to see that he has to take a step back and work for someone else, and he’s doing so with pride.

In this episode we get to see him really show up for one of his residents and you can see how deeply invested he is in this job–it’s not just a paycheck. He is really focused on being a better and more impactful man. Again, we just really love to see it.

I’m so proud of the Ralph Angel that we are getting in Season 5. He has come a very, very, very long way and has made some immense strides to become the man that he wants to be. Tt’s so amazing just to see him manifest this.

In this episode, one of his residents is longing for their lover. That prompts Ralph Angel to go find her and bring her to the nursing home so that they can have a social distance date, a reconnecting that ultimately this serves as the inspiration for what pushes Ralph Angel to tell Darla: “Let’s get married tomorrow.” The two are getting married we already knew that, (we saw that he popped the question in Episode 1 of the season) but now they’re not waiting. They’re not waiting for the pandemic to be over, they’re not waiting to find new jobs, they’re not waiting for things to be on the upswing. They are planning to take each moment not like it’s the last, but for the precious moment that it is and really just jump headfirst into their life happily ever after together .

And that all starts off with their wedding…That is going to happen the next day.

Calvin’s daughter is coming to stay with them and chilllllleeeeeeee…Nova has every reason to be anxious about this. I mean, we have already seen Calvin’s racist ex-wife and family, we’ve seen his children who are also struggling to navigate the separation and divorce. Can’t truly say that they’re racist or have any type of racial tendencies because I do believe a lot of the tension that we’re seeing references children just because they want their mom and dad to be together and not because Nova’s a black woman. However, his mom and his ex-wife are definitely, definitely, definitely struggling with racist tendencies, so it is 100% understandable that Nova will be very cautious to allow his oldest daughter to come back home from school since the pandemic is happening and everyone is going remote. To have his daughter come back from school and stay with them it kind of feels like a setup, like she’s walking into the fire, and understandably so.

But, surprise surprise, Calvin’s daughter is not problematic at all! In all honesty, she is very self-aware of her privilege, she’s very well aware of her position in society, and she wants to use her privilege and position to be able to be a true ally to people of color.

Sis uses a spades game–a card game–I’m not sure what they played. But I wasn’t paying attention to it because I was focused more so on the read that she delivers to Calvin about his cis white male privilege and how from birth he has been a problem. Chile yes, y’all have to go back and watch that part of the episode because it was truly *chef’s kiss.*

We soon learn that Calvin’s daughter really admires Nova and is genuine in that admiration. She is nothing like her mother, and it’s really great to see Nova’s development as Calvin’s ally. It helps me believe that their relationship is actually going to make it, because I do believe that if you have two families that can’t seem to come together, can’t seem to respect one another, and have some deep-rooted and problematic racist issues, it is very hard to make it work. It’s very hard for things to be able to go on but me seeing his oldest daughter actually respect and admire Nova gives me hope that Calvin and Nova just might be able to make it in the long run.

As I suspected, Hollywood’s mother caught the Rona and at the top of the episode he is in Baton Rouge worrying about her and unable to see her at the hospital. By the middle of the episode they are talking about taking her off the bed and by the end she has passed away, and we can see this is going to be something that weighs very, very heavily on Hollywood moving forward.

Especially given all the extra things that are placed on the situation–the coronavirus and how it has impacted the world, I know specifically in the U.S. a lot of us to struggle with just how our leadership has poorly managed and poorly planned and poorly maintained us during this time. We’ve had so many deaths that we did not need to actually have so I think that we will also see something about that in Hollywood’s storyline as well. His mom caught the virus and passed very, very quickly, so I’m very interested to see where they go in reference to the dialogue around his mother’s passing.

Vy wishes that she would have been there for Hollywood in this time of need but because she’s not in Baton Rouge with him she’s able to be back in St Joseph and be able to support Prosper. I think Prosper’s going to come out of this depression, he’s going to come out of the state that he’s in because Vy invites him to come over to the house and stay with her so they can all be together and you can already see Prosper’s spirits just lifting in him, starting to flourish.

The major drama that I feel like happened in this episode happened between Micah and Charley. We know that there was going to be a little bit of struggles, Micah is a freshman in college but has come back home again due to the coronavirus shutting down their campus so now it is this adult child coming back to live with the adult or the parent and Charley has to get to know him.

Micah has evolved a lot has made a bunch of life decisions that Charley doesn’t necessarily agree with in the last few months and now they have to live under one roof and Charley is already struggling with learning about him again, questioning some of his decisions but not trying to question his authority or autonomy over his life and being very respectful of that. But…Micah hasn’t made it too many great decisions.

His Rebound with this new girl is seeming to be raggedy for lack of a better word. He has been sneaking out to go to parties and we are in the height of the pandemic. Sneaking out to meet up with this girl and any other friends the girl has introduced him to causes Micah and Charley to get into a fight. Unfortunately, in the heat of the moment, Charley uses this opportunity to compare him to his father who made other impulsive sex-driven bad decisions and it automatically forces them to have a deep dialog around what Charley sees for Micah, how Charley sees Micah and how Micah is showing up in the world and then for them to get to a better place or common ground of respect and commonality for each other.

It’s super, super stressful to watch but it’s really great to see them at the end of this conversation. They definitely do come to a resolution. I’m so proud of Charley for apologizing to Micah for the way that she spoke to him in reference to comparing him to his dad because Micah isn’t like Davis at all in the way that she’s talking about, in reference to Davis cheating on her and being so focused on sex that he just threw the family away.

I think Micah is really struggling with his break up from Kiki, he’s really trying to find his footing in the world, really trying to identify or acknowledge who he’s becoming and set his flag down, too, like: “this is who I am.” Some of the strong decisions that he’s been making have been bad ones but ones with well-intentions of clearly communicating to the world who he is and the impact that he wants to make.