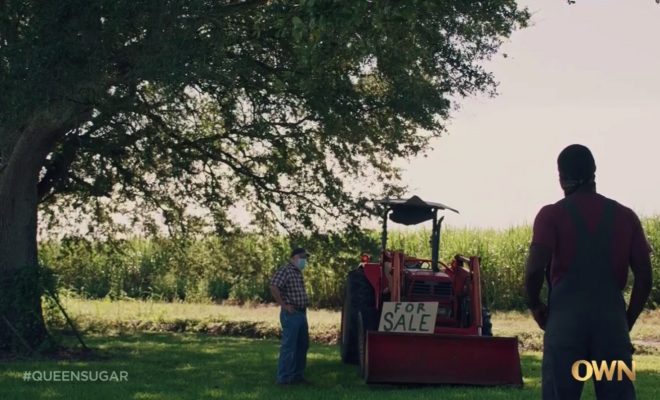 We open up the episode seeing Ralph Angel and the episode is titled “Late-April 2020.” At this moment in time the COVID-19 pandemic is in full swing and most of if not all of the US has been shut down. I actually liked that they chose to include this part in the story because it provides a different perspective: we get to see the effects of the pandemic and of quarantine on farmers. We see Ralph Angel walking through the sugarcane fields, it’s almost Harvest Time, and we hear a voice over from the news station talking about how farmers are going to suffer without having people equipped to bring in the harvest, so some people could potentially lose everything.

Rod has to make calls to his team and lets them know that they won’t be able to come in and work and it’s the sweetest and saddest scene ever.

It looks like Nova decided to domesticate just in time because she is in quarantine with Calvin and they seem to be better than ever a month after the travesty that was meeting his family and his ex-wife.

Aunt Vy is putting her good heart and her diner too hard work packing up meals to feed people during this troubling time, and Charlie is in the thick of it with the city council.

Nova and Calvin are apart of Vy’s troop in delivering the food to people who need it and Charlie gets tasked with having to confront her about this as it’s brought up in her councilman’s meeting. Tensions on that side are running a little high and it’s interesting to see Ralph Angel’s perspective on the whole thing even with having to let go of his workers even and deciding not to bring the sugar cane to harvest. He is completely calm and believes that this will wind up working itself out, that the farm will be better for it, and that they will be absolutely okay.

I’m watching this trying to figure out if he really means this, if there’s some breaking inside of him, or is this some type of facade but it looks like he genuinely believes this.

This episode did a great job of truly capturing the essence of how hard the COVID-19 pandemic hit families, black communities, businesses, and entrepreneurs. I was not a fan of the idea of a lot of shows having storylines tied into COVID because, as you know, at the point I am writing this article, we are a year into this pandemic and there’s no end in sight.

I just didn’t want to watch it. We were living it.

But, I believe that Queen sugar is doing a phenomenal job of showing it in the way that you actually get clear contacts and perspectives from other walks of life other than yours. It’s very authentic and true, to the point where it’s not sensationalized or done in a way to simply entertain but also to educate and I think also to provide validation for people. I feel very validated in watching this and seeing a few of the phases that I experienced during the pandemic, from depression to isolation to over productivity to unproductivity, there’s so much that they are showing and I think that it’s great.

Darla has been laid off from her job, Micah has returned from school and he’s been dumped by Keke. There’s truly a lot going on.

Ralph Angel starts selling off his farm equipment to try to make ends meet while he keeps a positive disposition but you can definitely see that the pandemic is starting to wear on him.

Nova, in the last visit of dropping off essential supplies to Mister Prosper, peeps that his energy is off, that he seems to be struggling with isolation, depression and despair, and she gets to work praying for him. Get you some friends who are going to pray for you!

Overall, this episode really just provided a great amount of concepts for where each of our characters are in their lives how they are persevering through a very traumatic and trying time in the world’s life. I still feel like we are just getting warmed up. “Queen Sugar” is actually going back into production for Season 6 this week, they are in pre-production right now so they have already been green-lit for the next season which means that there is so much more to come, I feel like we are again just getting warmed up and once the bombs start to drop–once the truly dramatic shift starts to happen–it probably won’t stop and roll us right into Season 6.

To me, it’s going to be very interesting to see what happens with a few key players.

I think we’re going to see a huge transformation in Micah even bigger than his newfound Independence and newfound personality and just how he is choosing to navigate the world and show up differently. I definitely think it’s more to the story behind him being dumped but then later on in the episode we see him on the phone with a new bae. I’m very interested to see what is going to happen next with Michael West and how Charley will attempt to navigate life with this new Micah.

Charley already has a ton of other pressures and concerns and things happening in the world around her, so Micah going through this personality and identity shift adds a layer. The global pandemic is another layer and I can see that things are going to start to really build up with her and I don’t know if she might crack at some point.

I haven’t talked to you much about Hollywood but I think that he is going to go and see his mom and, unfortunately, I’m starting to feel like his mom may pass. I definitely think that they are going to explore death with the pandemic and I hope that it’s not Mr. Prosper, so it might wind up being Hollywood’s mom. They are the two Elders that are currently shown on screen in each of these episodes so I do think that we’re going to see a death but not just with the elderly…

I think that that’s going to be one of them, and I’m really concerned about the next two episodes because if we’re going to continue along this path right now, they’re in April. That means that next week it should be in May and the week after should be in June. In June of 2020, the world–or the US in particular–started to implode with the Black Lives Matter movement and black people saying enough is enough and starting to build on the conversation around Black Lives Matter and police brutality and the fact that our country cannot continue to silence, kill, and abuse us.

Since they did the pandemic as part of the story line I definitely think that they are going to include all of the social activism and conversations around injustice that we have seen over the last year. I definitely think Queen Sugar is going to use this season as a way to speak out in regards to June 2020 as we really saw things come to a head.

Ralph Angel is still playing it cool by the end of the episode and I’m going to go ahead and believe that he is fine, I’m praying that he is fine, he is probably handling the pandemic the best out of all of the Borderlon kids.