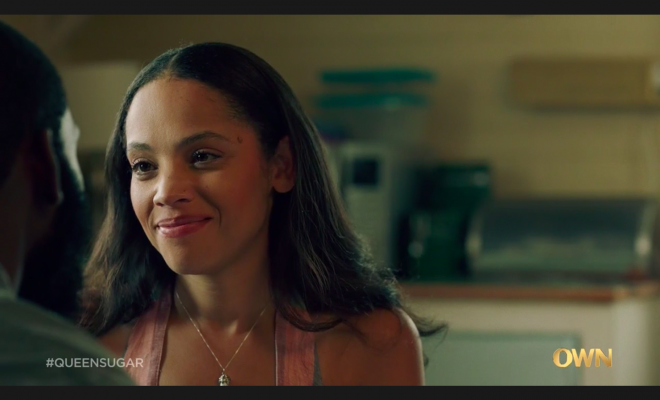 This Article was updated on August 5, 2021 by Riley DeBoer

We are back for another week in St. Joe’s Parish with our favorite family the Bordelons and now we get to see what happened as they braced for the COVID-19 pandemic. (Queen Sugar Season 5 Episode 2)

The episode opens with Ralph Angel and Darla who are planning their wedding and it is so cute! We have been waiting four years for these two to figure it out and it is so beautiful to finally see them in a good place. But honestly, I am pretty nervous.

Everything seems to be going so right and I guess the drama TV fan in me knows that it is never too good for too long, which is starting to break my heart before anything bad has even happened yet. Darla and Ralph Angel are building their beautiful little family. I know we are getting a wedding but are we getting a baby too? They haven’t plugged any of that in the show as of yet but I guess that is just my wishful thinking.

Charley is on a mission but stopped short by a random schedule change with Parker that throws up all kinds of red flags. I am here for every moment we get to see Charley state her position and stand in her power! I am definitely taking notes from her for when I need to call upon my inner bad ass boss bihhh to get some things handled or put some people in their place.

Nova is panicking as she prepares to meet Calvin’s family and rightfully so. This is an interracial couple in the south after all and while we are all living in the new millennium there are plenty of folks who barely left the Civil War and want their Confederate and hate-filled agendas heard. You never really know what you’re walking into in situations like this and while I was hoping for Calvin’s family to be nice, kind and not racist, my expectations were not high at all.

Calvin’s ex-wife comes into Grandpa’s birthday and is ready to cut up! And between Calvin’s two-faced mama and the ex-wife, I am already over it before any of these scenes even get started. Calvin’s ex-wife tries to call Calvin out for his preference for black women and tries to make Nova feel insignificant until Calvin steps in like a real OG and makes it clear: Nova is the only woman he loved out of all the women he has been with, including his ex-wife. He was just biding his time until Nova was ready to have him…and yes, he said it just like that! Take that, ex-wife! Seems like you were actually the other woman. That scene had me on edge because even though I don’t really like Nova, I don’t want her embarrassed. But the way Calvin turned that situation around was absolutely amazing.

But honestly, Calvin’s love of Nova kind of scares me and I don’t know why. I want to believe that it’s pure and real. I think that he means everything that he is saying but watching it makes me so scared for Nova and I can’t figure out why. Maybe because I can’t tell if she loves him as much as he is in love with her…I don’t know but I will keep you all posted.

We also get the first mention of the coronavirus which helps give context to the episode names. Episode 2 is titled “Mid-March 2020” which is when the shutdowns started in the U.S. last year in response to the COVID-19 outbreak. Mr. Prosper brings it up making a note that the virus is affecting older people more.

The virus and the pending shutdowns actually become a character of their own as Charley spends the tail end of the episode trying to figure out how they will handle everything. She also ends up interrupting Aunt Vi and Hollywood’s date night to walk Vi through the need to shut down the diner.

The “Micah coming out” scene was truly a chef’ kiss! There was so much joy and tension in this scene. I know Micah had to maintain discretion during his pledging process but for him to spring it on Charley and Davis like that was a bit much. How are you going to invite your mama to watch you cross over and she had no idea that you were even interested in pledging? This was an opportunity for Micah to assert his independence but the way he went about it was just a lot.

This season we are going to watch Micah step into his independence, find himself and create himself which I am totally here for but I’m not here for him alienating the people that love, support and can help him along the way. First, he chose not to go to Harvard. Now he chose against his father’s fraternity and hid it and then he starts to act out in jealousy from Keke just talking to a guy she knows. Needless to say, Micah West has a lot going on this season and it will be a wild ride.

Also let me make a note that it might not have been unfounded jealousy when it came to Keke. When Micah asked her about the guy, she started to get a bit squeamish. Is she hiding something?

It is so dope seeing Hollywood pull together this new place The Real Spot, a dope place for men to commune, connect and support one another. And it isn’t until the end of the episode that we really register how much of a toll what’s to come will have on all of the characters and the community.

And that’s my Breakdown for Queen Sugar Season 5, Episode 2. I think we’re finally getting back into the swing of things and getting understand the characters in their new lives. Don’t sleep though because I can feel the drama coming!

Let me know in the comments what you think is going to happen next! You can also check out the video recap of this episode below!

Don’t forget to tune into new episodes of Queen Sugar on OWN every Tuesday night at 8/7c.