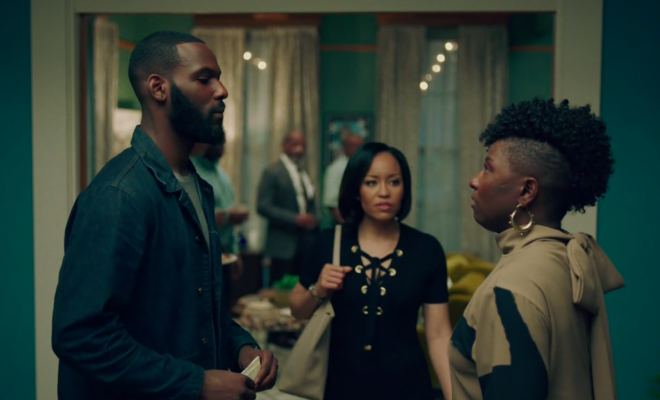 Queen Sugar is back with their fifth season and we are bringing all of its juicy info, Easter eggs and drama to EricaVain.com! Let’s kick it off with our Season 5, Episode 1 Breakdown of Queen Sugar.

The episode opens with Nova praying to the ancestors for redemption, showing gratitude and cutting off her locs! Apparently, sis is ready for a change. However, I don’t know if I am still over Nova’s selfish disregard of everyone else last season when she hooked up with Remy and wrote that book but I’ll just mind my business for now.

The writers really do a good job of easing us into Nova’s character by allowing her to show up in ways of support for her siblings throughout the episode. The only thing that we see actually focused on her in this episode is the launch of her media site but even that is framed in a way that will continue to protect and uplift the people with independent press that will tell the truth. And she is using the proceeds from her book that blew up everyone’s lives last season to fund this new venture.

It also looks like Nova is going to really take a shot at making a real life with Calvin this season as we see him meet her family, interact with her friends and they even have an elevated debate about when Nova will be able to meet his family so that they can rip the Band-Aid off and truly integrate into each other’s lives. But honestly, I don’t know how I feel about Domesticated Nova that plays house and puts on dinner parties.

Blue and Ralph Angel are absolutely adorable and I enjoy every scene with them. Ralph Angel has grown so much as a person, father, boyfriend and family member and we love to see it! It also looks like we are getting our happily ever after with Ralph Angel, Darla and Blue together as a family.

Since the start of this series, we have seen RA struggle with morality, recovering his life after being released from prison, losing his father, discovering his son isn’t actually his son, having his heart broken by Darla and being betrayed by his sister, so it’s good to enter this season on a calm and peaceful note with RA and his family even though we will see his struggle with keeping the farm start to play out this season.

When we left the finale of Season 4, we saw Charley win the councilman seat which gave a lot of hope to the farmers of St. Joe as she is on a mission to stop the highway and protect everyone’s land. And though Charley has been able to hold things off, things come to a head in this episode as RA and the rest of the black farmers in the parish are issued letters of eminent domain which are basically government eviction notices.

This sends Ralph Angel to a dark and angry place for parts of the episode but he is able to recover as we see him spend time with his family at dinner, at the St. Joe Honoring Parish event and even when he gets down on one knee and proposes to Darla to close out the episode. If this episode is anything like the rest of the series, then Ralph Angel is in for one bumpy ride this season.

Our favorite couple goals are still going strong as we see Hollywood and Aunt Vi working at the diner. Seeing the two of them together truly makes my heart smile. I love Aunt Vi as a character and what she represents for older black women on screen. You can find love, happiness, new careers, more confidence, your sexy and whatever else you want at any point in your life and Aunt Vi is the walking personification of that.

However, I don’t think we received any full resolution around the forces that were pulling at Vi last season even though we did get the wrap-up of Jimmy Earl and the trauma he caused that made her distance herself from Hollywood. In this episode Vi looks and seems great and so does Hollywood so I anticipate we will learn, if there is anything, what their drama will be in later episodes.

Micah is on campus and Charley is living her best councilwoman life. But it is clear what’s happening with Micah as Charley hasn’t heard from him in two months. It becomes even more clear when he is on campus and a homie rushes him off the phone moments after he gets on it.

Micah is pledging and by the end of the episode we get to see him finish out this process and become an official Greek. Between his activism and his discovering himself I think we are in for a very interesting season of events from Micah West, which brings me to Charley.

Charley starts off the episode winning and winning some more! We see her effortlessly sashay in and out of courtrooms as Francis Boudreau is sentenced to seven years in prison and Parker and the Beckington Group are tired of the highway delays. But no matter how hard they continue to push, Charley prevails. Francis is sent to prison regardless of her money, social status and connections and the judge delays the highway project again after Charley asks for time for an independent investigation into the Beckington Group and their impact on the environment.

A lot of this episode is spent with Charley going head-to-head with Parker who we learned last season is also Mr. Landry’s daughter. The Beckington Group is still trying to take the farms from all the black farmers. I swear they can never catch a break! And Parker isn’t playing fair as half way through the episode she gets tired of taking L’s and decides to switch up her approach.

Going up against Charley in court didn’t work, coming to her woman-to-woman didn’t work, so now she is trying Charley in the court of public opinion as she makes a major announcement that they will move the highway sparing the black farms. But that’s anything but good news because she also announces that the highway will now go right through the parish’s popular grave site which means they are going dig up people’s love ones so they can build a highway over their final resting place. And with that declaration all hell breaks loose!

And that’s my Queen Sugar Season 5 Episode 1 Breakdown! Do you think that Charley is going to prevail? Are Ralph Angel and Darla going to make it this time? Let me know in the comments what you think is going to happen next! You can also check out the video recap of this episode below.

Don’t forget to tune into new episodes of Queen Sugar on OWN every Tuesday night at 8/7c.