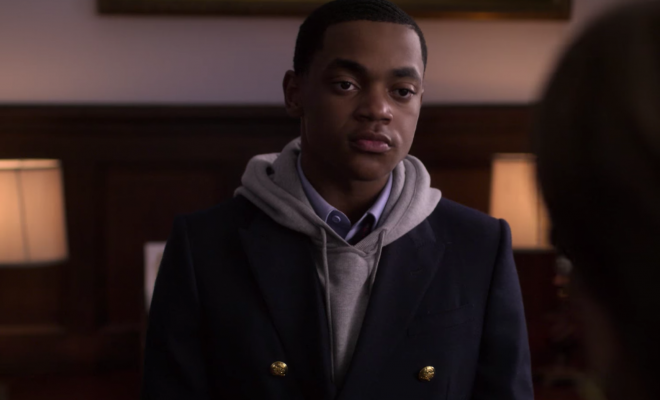 I mean he has gone from the most hated to the MVP with his own spinoff and a season 2 greenlight just two episodes into season 1. This is the Powerbook II: Ghost Character Breakdown and we are breaking down Tariq St. Patrick.

We got a preview of Tariq building a drug organization with his dealing at Chote. Then when he gets kicked out he restarts again at his new school before that organization falls with the fall of his professor, who was dealing for him. How many times did we see Ghost get hit with a drug problem and work his way out or around hit. Now he is back in all the way with higher stakes… He has to come up with 500,000 to pay for Tasha’s defense attorney. He is not entitled to inheritance until he graduates, so he needs money to live and support the family with Tasha being in jail.

In addition to the similarities with Ghost and the drug organization, Tariq is also just like Ghost on the legal side of things. He is able to high tail it to an Ivy league college with the help of Simon Stern and gets into the super competitive Canonical Studies major, that allows students to graduate in three years, instead of four. Tariq is moving, shaking, making deals and manipulating everyone that crosses his path.

Though he has inherited the entrepreneurial hustle from his father, he struggles throughout the first half of season one to balance it all. Trying to stand up a highly lucrative on campus drug organization, get his mother out of jail and pass a very rigorous academic schedule is A LOT for anyone, even a St. Patrick.

The partnership with the Tejada family shines a new light onto Tariq’s personality. When it comes to the Tejada’s he has seemed to learn how to play the game, not step out of line and respect authority. All things we watched him completely ignore in the last 3 seasons of POWER. Our little Tariq is learning.

Though Tariq feels vindicated for killing his father because he had to we see at the funeral and when he has to go and get a gun for protection the seeds of what seems like regret. It is not until Ghost is gone and he is having to stand on his own that he really realizes that Ghost was right about a lot of shit. And while angry, disappointed and alone, Tariq was never loved and unsupported by James.

As the series progresses we will also see what Tariq will do in his love life. At the midseason finale we see him stuck in a love triangle between Diana Tejada and Lauren. It’s interesting because he actively tries to keep both girls interested but also honestly is not planning to commit to either. Could it be that Ghosts relationship with Angela and how Tariq felt about it will manifest in these romantic relationships making for an even more complicated life of our growing baby kingpin? I am very interested to see if Tariq chooses, who will he choose…. Oh and Effie said she ain’t out the game yet.

It’s weird to see Tariq actively reject the support and parental vibe given by his professors but openly accept it from Monet Tejada. Yes, Carrie Millgram and Jabari are two sides of the OD “I am worried about you coin” but in a time so close after he “had to” murder his father one would think he would swing more towards the legit/right side versus finding more comfort in the streets that turned him into a murderer.

Though Tariq navigates the things happening to him pretty well, we do see quite a few missteps like him getting caught on camera confessing to killing Ghost while at James St. Patrick gravesite. It is in those moments that the audience is reminded that he is still a kid and not a gun totting, gangsta kingpin his circumstances would paint him to be.

To be honest the most fascinating thing about Tariq’s character in the first 5 episodes of Power Book 2 Ghost is that I actually like him now… It literally took Courtney Kemp 5 episodes to undo 3 years of pure disdain for a lil bratty, privileged and defiant teenager who every week I wished got his ass beat.

What is the most interesting thing you have learned about Tariq’s character? Do you like him yet?