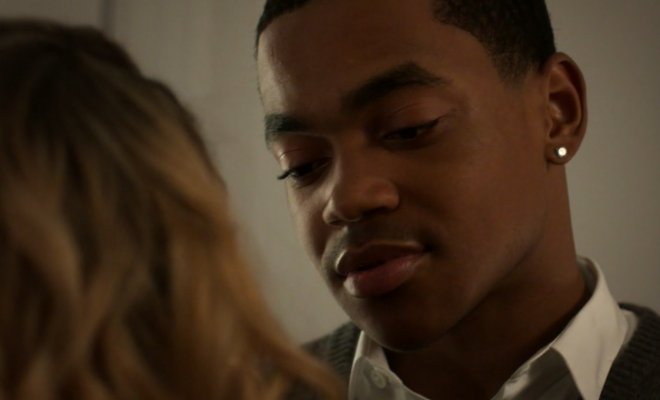 Tariq will have to choose between Lauren and Diana. One way or another he will not be able to ping pong back and forth between the bomb beauties for long.

The most logical choice that he should pick to establish a relationship is Lauren. I mean that is pretty obvious right? Five episodes in and we have seen Tariq, Lauren and Diana dance around each other giving us all a spin on their merry go round. So let’s break it down.

While Lauren and Tariq will have to learn how to navigate in one another’s worlds, Lauren will be the woman that will help him to take his ambition, and intelligence that he learned in the streets and transform it in a positive and legal way. She is encouraging him to be vulnerable, and accept the help that people want to give him, such as Professor Milgrim, his minority advisor. Lauren sees the potential that Tariq carries within him, but she also notices that he struggles emotionally. Sis is paying attention and some great relationships have been built off less. Also Lauren seems to genuinely want to get to know him, for who he is. She always asks him questions about who he is and about his father, and is not deterred by how guarded Tariq is.

On the other hand, Diana rebelling against her mother’s control has also found genuine interest in Tariq. Hers is a bit different though because it seems like she is envious of his position in life, being able to be independent, go to college and run his own business. Drug business but it’s a business. Tariq intrigues her because deep down she wants to be him. While there is clear romantic chemistry between the two, Monet forbidding Diana from dating Tariq, seems to make him all the more alluring to her. If Tariq does get romantically involved with Diana, this could cost him his life. There has to be a street code where you are not allowed to smash the connects’ daughter, especially after she said that your ass couldn’t. No matter how much Diana adores Tariq, ultimately, her loyalty to her family will probably always come first. Diana is giving Bonnie to a Clyde vibes but didn’t they both die in the end?

I digress. With the pluses also come the minuses and each lovely lady has their cons. It seems as if Tariq and Diana are using each other to get to their ultimate goals, which means that a relationship would look very codependent and toxic versus healthy and freeing. For Tariq, Getting with Diana could mean staying one step ahead of Monet because Diana has a hard time drawing the line and not oversharing family business. Also if Monet ever decided to act on the plan to eliminate Tariq, Diana’s love for him would create a problem that could save his life. Diana’s goal is to be her own person and go to college. She is loyal to her family, but is itching for her own independence. A relationship with Tariq seems like it would give her that.

Do we even need to mention Effie? She was one of Tariq’s first love interest during POWER but betrayed him to take over the drug trade at his private school Chote. When he met’s up with her early on in POWERBOOK 2 to get product to sell, we see that Tariq is distant and cold to her. Effie tried to offer her support for the passing of his father and he brushed it off. He cannot afford to have someone in his life that could mess with his plan to get his inheritance to take care of his family. Basically fool me once, not again. But this is the POWERVERSE and you never know who is going to pop up!

While Tariq and Diana have a problem of trust, Lauren and Tariq have a problem of logistics. A very sexy word — logistics. Lauren and Tariq’s relationship is built with a stronger base. Lauren does want what is best for Tariq. She encourages him to do better at school and look to his future. But, a romantic relationship between the two of them would be difficult. They are both applying to the internship in D.C. — with one spot. That academic competition will be hard on a relationship. Not to mention, Lauren’s current boyfriend who is already in D.C attending school. Lauren does not come from a family that is in the life and Tariq does not seem to be in any hurry to tell her the real of what happens in his life when he is not in class. And why should he? My money is on she will not understand and she has yet to give me “Ride or Die Chick” especially after she left him passed out in that room at his party. Girl, just NO! This is what I mean about logistics. Everyone knows the phrase, “Right person, wrong time.” It is a cliche but cliches exist because they are true.

So while things are not perfect, I wanna say Lauren and Tariq’s relationship is in better shape than Diana and Tariq’s. A partner should always be encouraging the other to grow and be a better version of him or herself. And when you look at the two so far, it is Lauren who better fits that description of a partner.

But then again, Diana is already in the life and can help Tariq reach Queenpin status being the Tasha to his Ghost. Yall know I had to say it. You was thinking it!

So basically, I don’t know who Tariq should date do you? Tell me which woman you think is the best for Tariq in the comments section below.