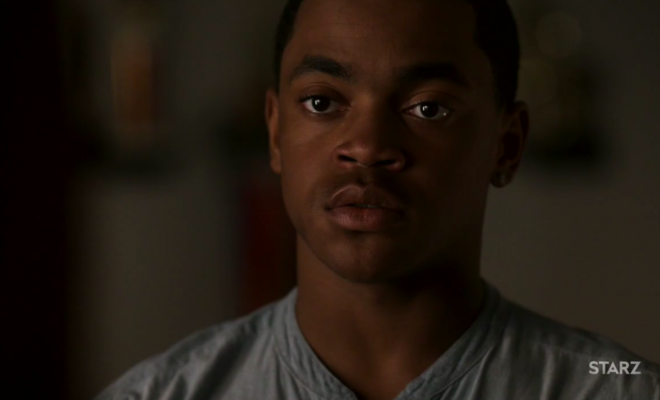 The start of the episode truly previews what we can expect as this episode was all about the Tejada Family. We see Dru and Cain making their pickups and also beating ass when needed because someone came up short. It’s clear that this is a true family business, big business at that with reach in the streets.

It typically takes me a while to tie in the title of the episode to the takeaway from the episode but we get that right away with this episode as we are reminding about the importance of “Playing the Game”. Tariq has to learn to “Play the Game”. He has been so focused on Learning and Winning the Drug Game that he completely took his eye off the fact that he has to play the game in life now too. Honestly, that’s something he never learned with Ghost even though he had plenty of opportunities to do so! No Ghost, no Tasha, means Tariq is on his own and he definitely needs to learn this now. He gotta play along, play nice and play dumb if he hopes to survive. Tariq goes in on his white professor in class while using the literature assigned to make his point and I love it. His academic life is great seasoning on how we see his life now, its not the main thing but it’s the thing that gives his life flava. Typically his class, professor, and fellow student interactions tend to mirror the life lessons that he needs to learn and communicate to use where he is mentally. It’s a great set-piece that truly connects all of what is happening and how Tariq feels about it. In class, he stands up for himself but is reminded by his classmate Lauren that he gotta Play the Game, and that sets up the rest of the episode and how that theme plays out over the course of the days to follow.

We finally get to meet Lorenzo. Hey Loreeeenzo! The leader of the Tejada drug organization makes his appearance and we quickly learn just how powerful he is even while serving a life sentence with the Feds.

This mock trial was a BRILLIANT idea! Davis is on his shit! Tasha is super sure that she wants to take the stand in her own defense trial and instead of just letting her Davis and his team organize a mock trial to test Tasha out. The initial testimony goes beautifully but when Davis invites Tameka in to do her cross-examination she rips her to shreds and shows a preview of exactly what to expect from Saxe and how hard this case is truly going to be to win. Even with so much truth being told, Tasha still looks very guilty and they are going to have to figure out how to get her off. At this point, Tasha needs to trust Davis, tell him what actually happened, and hope they can go from there.

“Your life is this family” Ghost broke his back to make sure that the family business wasn’t the only legacy he had to bestow upon his children and the Tejada’s on the other hand are focused on not letting any other dreams, aspirations, or goals distract them from the drug business at hand. It’s very interesting to see this play out now after we watched the tension grown within the St. Patricks family regarding the business and Ghost’s ambitions outside of it.

If nothing else, this starts to show the many cracks in the Tejada family:

Speaking of Diana, I know she likes Tariq but sis is wayyyyyy too forthcoming about her family business. She trusts him and talks too much! We know that Tariq is in the game but she don’t. Monet has every reason to be suspicious and mad cautious.

I can’t seem to figure out if Jabari is looking out for Tariq and invested in black minds or a hater and just trying to stick it to him. This scene with the overzealous student makes me question his motives, integrity, and position even more. And of course, Professor Millgram is right next door and hears the whole thing.

Tasha is making moves on the inside but I can’t seem to figure out why. Does she think she will lose? Why are you making inmate friends sis? I wonder who we are about to see Tasha become as she tends to adapt well to changes in circumstance and environment.

Overall Episode 3 was dope as we continue to pull back the layers in the POWER UNIVERSE! The mock trial gives a great different view on a lot of the events that happen and sets up the characters that we see today to be in the position they are in. It was truly chef’s kiss**.  Tariq gets one of his wants in a connection out of Monet and though all seems to be lost with Tasha, they are looking up out Tariq!