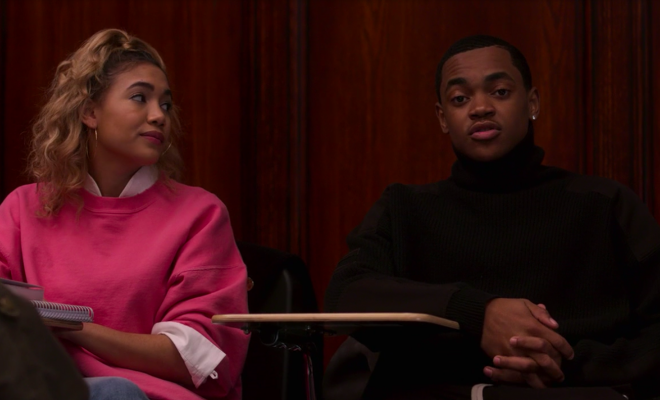 Tasha is sticking to this dumb ass story about Tommy killing Ghost and chile she is consistently laying land mines that she, later on, walks over and blows her own shit up. She doesn’t trust Davis Mcclain yet so I guess it makes sense that she isn’t being honest with him like Ghost was with Proctor or she wanted to be with Terry Silver.

Tariq is hard at work trying to balance school, his business, and getting the money for Tasha’s defense attorney.  When Tariq arrives in class we get a lovely cameo from rapper “LightSkinned Keshia” who is the smart ghetto girl Bruceshondria Carmicheal.

When Davis asks “What motive would Saxe have to charge his mother” I don’t know why in the hell he didn’t tell Davis that he saw Saxe at Truth the night of the shooting. That is the one thread of information that will change all of this and he refuses to pull on it.

Monet is an enigma for real. She is a queen pen with a kingpin husband in jail for life and she is sleeping with a cop that wants to take his place. On top of that, she is maternal, taking care of her family but relying heavily on her oldest to do numerous kills for her. Like sis, you need a hug?!? She is not sold on Tariq and has shifted energy to get to know everything there is about him. Rightfully so, Tariq has a reason for getting close to this family. We all are interested in knowing why.

There is something off about Professor Milgram. She reads concerned, focused, and great at her job but chile her interest in Tariq has gone into overdrive, and we only on episode two. Not to mention we learn that she is also a love/sex addict who just backslides with Professor McManus who is a huge trigger for her.

Similar to POWER, no character is as straight forward as they appear. There are complexities built into every personality, decision, and moral codes that govern their individual decisions.

The investigator working with Davis can see right through Tasha and wants him to jump ship for this case which is not going to happen. Whether it appears as an unmovable mountain or not, Davis seems captivated by the opportunity to win this hail mary case and stroke his own ego.

Saxe is in for a world of trouble. He knows that this queen pen case is bullshit but he has to go along with it because of his bosses. So he decided to recruit an agent who is as clean as they come and he will struggle in trying to win this case and not being able to blur the lines of justice and integrity.

I don’t know what happened between Milgram and McManus but this is certainly going to spell trouble for them, and maybe even Tariq.

It is not until Cain little sidebar with Tariq that I actually fully buy Tariq moving forward and leading this series. He breaks down the snitching situation that is happening with Ezkiels family, stands ten toes down, and is definitely giving big dick energy. It was very Omari Harwick as Ghost, but younger.

I was surprised to see Tate show up, giving he has his own spin-off in the works. Who knows who else we will see from POWER in the GHOST era. James’ funeral brought out everyone but Tariq shines again with a beautifully complicated eulogy for his father. Throughout the episode we see him grappling with the idea of the funeral and maybe even experiencing feelings of regret. As a matter of fact, Tasha sheds a single tear and I would imagine she is struggling with some regret as well.

With each episode, we learn more and more about what the Tajeda family is capable of. Cain kills another and this time it’s their Rat uncle. Not only does he kill him but chops him up and disappears the body.

In the season finale of POWER, every major character was reckoning with how much better their lives would be without Ghost, and with episode 2 of POWERBOOK II: GHOST we see that none of them are better off. Actually just deeper in mess with no clear idea of how to get out of it.

On the preview of the next episode we see Tasha is going to be making moves in prison, Monet might not be as untouchable as she appears and discovering that Tariq is dangerous. Tariq showed a lot of growth in this episode and with his sidekick from Chote, Brayden, he is poised to start his organization again on campus and this time it will be bigger, better and hopefully, he will move differently.