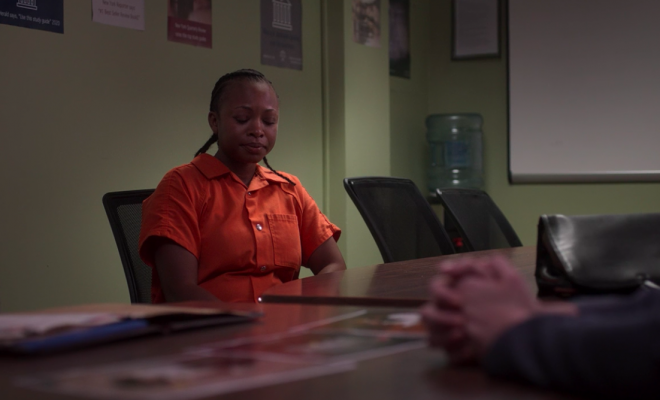 Episode 1, The Stranger, is the set up for this new story happening in the POWER WORLD. Clearly we are following Tariq in this series days after he kills POWER protagonist and his father James St. Patrick. The Power writers do a phenomenal job of catching us up on what has happened in the days between Ghost’s death and where this series starts on Tariq’s first day of school and what this new world looks like. Though we will be exposed to the same lying, killing, and drugs we got to see in POWER, this series is definitely elevating the story, appealing to a younger demographic, and pushing to build major plotlines around a Strong Black Female Lead with Naturi Naughton continuing her role as Tasha St. Patrick / Green.

We get a preview of how Tariq will live this double life as he hustles to make it through a bachelors degree so that he can get access to his inheritance while also stepping into being the man of the family and having to find money and resources to help Tasha beat the Murder Case on her for James Death. In all honesty, Tasha deserves this because had she never tried to frame her boyfriend, Her and Tariq would be scott free and nobody would be taking the fall for Ghost’s death.

If leaving high school early and going straight to college while trying to hustle up money for his mother’s defense and to support his family wasn’t enough, you know after killing his father. The Power writers are also going to give us a lil romance as we see Tariq navigate the start of feelings for two women in episode 1, Lauren and Diana.

Early on in the episode, we get our hopes up as Tameka Washington get’s Tasha a great deal and it looks like she will be able to go home without any jail time. That is until Tameka pulls at the right string and Tasha panics and fires her. I’m going to need Tasha to turn off her mom’s brain and start thinking better, harder, and less emotional than this. She is tripping for real and is going to wind up rotting in jail because of it. Before we finish with Tameka, let’s know how sis is SLAYYYYYING this season. Come on lewks!

We get reminded halfway through that we are still watching a POWER spinoff on STARZ as Tariq walks in on his new roommate having sex with some girl and the first thing I could think of was, “Oh, Shit, are they about to have us seeing Tariq have sex?” Cause yall know very rarely did an episode go by without Ghost sleeping with Angela or Tasha. I’m hoping for season 1 to be Tariq sex free but let me prepare myself… Zeke is ultimately Tariq’s meal ticket at Stansfield and back into the drug game. His family is a well connected, drug organization in Staten Island and becomes of great interest to Tariq very early on.

We get introduced to the Tejada family with a party for Zeke and it’s interesting that Tariq meets Cain as he is getting head in the bathroom, Dru briefly and for some reason, he looks at Tariq super suspect and Diana who almost instantly shows her interest in Tariq. Monet is the mysterious matriarch and clearly the boss of all that is happening with and around this family.

If one thing episode 1 establishes early on is that we are about to get a whole lot of lying this season. Tasha is lying about killing Ghost and who she knows to have done it, Tariq is lying about how he is getting money to pay for Tasha’s defense, Tasha is lying to her defense attorney

The book Tariq is asked to read to enter into a special academic course is called “The Stranger” and it mirrors the idea of how Tariq didn’t know Ghost and doesn’t know himself. I love the intersection of academia and literature in the plot of the series and how it gives further insight into Tariq, his life, and his perspective. Similar to him, the main character in the book kills someone and Tariq makes an argument against him seemingly not knowing why he did it because he firmly believes that killing someone is an intrinsic choice!

Overall the pilot is strong on its own but we get the benefit of all the information we can bring over from the original series POWER. If you are a POWER fan you will enjoy this series as we get an update in the storyline but many of the same major elements that made POWER a break out hit.