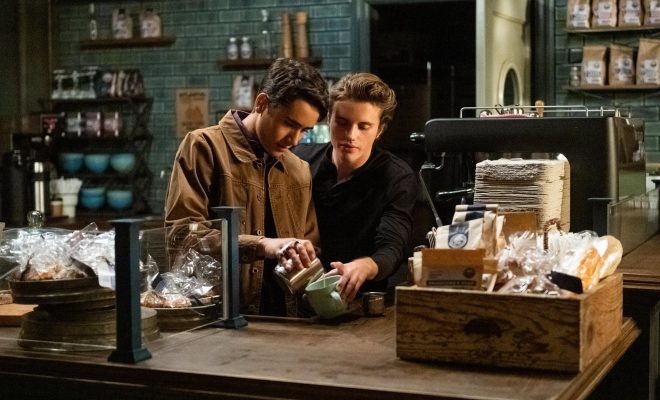 Happy Pride everyone! The newest season of Hulu’s “Love, Victor” dropped last week and if you haven’t seen it now’s the time to catch up. It’s a sweet, coming-of-age tale about being yourself no matter how society tells you to conform. While it’s based on the hit movie “Love, Simon” you do not need to know much about the movie to watch this show, they catch you up to speed with flashbacks. With twenty, thirty-minute episodes it’s the perfect thing to binge in the last week of Pride month. Let’s get you all caught up with a season one recap!

The season opens on a low for our main family, the Salazar’s, who were forced to move from Texas to Georgia under mysterious circumstances that the parents seem reluctant to discuss. Despite being the new kid in the middle of the school year, our main character Victor Salazar is excited to begin at a new school, hoping he can finally come out as gay and be himself among these brand new people. (Spoiler: It does not go as he hoped.) His sister Pilar is less optimistic, she’s angry at her parents for forcing her away from her friends and her boyfriend back in Texas. Honestly, I get it. Moving sucks.

Victor begins his first day at Creekwood High side by side with his new best friend Felix, head full of stories of Simon Spier (of “Love, Simon” fame) – a gay man who graduated from Creekwood after confessing his love to his boyfriend in front of the entire school. If Simon could do it of course Victor can! These hopes quickly die after he sees Benji, an out and proud gay kid, harassed for being gay. And with that Victor scurries straight back to the closet. I don’t blame him, the poor thing.

With the closet door locked tight Victor’s ready for a season of self-discovery as he meets Mia; one of the most popular girls at the school -but don’t let that fool you! She is super sweet, intelligent, and artistic. It’s no wonder that Victor thinks that if he could end up with any girl, it would be her. After a few forced romantic moments at a carnival and a house party, Mia and Victor end up in a relationship that’s sweet but lacking in any real chemistry.  There is room for Jesus and all of his disciples when they kiss, no sparks are flying there.

However, you know where sparks are flying? With Benji. That’s right, Victor gets a job at the same coffee shop where Benji works and those two can’t stop making eyes at each other, even when they are both in a relationship. If you’re going to only watch one scene of this show, watch the scene where they both rock out to Carly Rae Jepsen’s ‘Call Me Maybe’. It’s ridiculously wholesome and captures the chemistry between them perfectly. But then, just after Benji and Victor have this adorable heart to heart in a motel room, Victor has to ruin everything by kissing him. Boy! You have a girlfriend! He has a boyfriend! None of this is okay, it’s not the right time.

Speaking of not okay, the truth comes out; in the middle of the first season we learn the real reason the Salazar family moved to Georgia. Apparently Isabel, Victor’s mom, had an affair with her husband’s boss causing the husband, Armando,  to have a full-out brawl with said boss. Brawling is not recommended in the workplace so the family has to move. But whoopsie! Guess who decided not to tell the kids? Pilar finds out about the affair first, immediately losing all trust in her mother. Fair. Victor finds out second but he’s the family’s support pillar, he has to stay strong even though everything he thought he knew is crumbling around him, and it’s pulling him down with it.

This whole season has to do with crumbling relationships. Mia and Victor, Isabel and Armando, Benji and his boyfriend Derek, Pilar, and her entire family. The ones building something are Victor’s best friend Felix and his long-time crush Lake. They go from hooking up in storage closets to making it official at Homecoming. Good for them. But you know? Sometimes those old things have to go to make way for better things. Better things like Victor and Benji finally getting together.

And get together they do, but not without a lot of drama first.

After the kiss with Benji, Victor panics and runs off to New York for a weekend to stay with Simon Spier who he’s been texting throughout the whole show. Simon, his boyfriend, and all his wonderfully gay roommates get Victor out of his shell, sharing stories about their own experiences with coming out and taking him to his very first gay club. It gives Victor the confidence boost he needs to finally come out to himself. Which means he has to end things with Mia. He tries, painfully, for an entire episode but between Mia’s dad and her new stepmom crashing their hang out and the spring formal he’s unable to get a word in. But guys he really shouldn’t have waited, because keeping secrets always causes drama. And this dance is full of drama, between Victor being outed in the bathroom, his little sister finding out about the kiss with Benji, and Benji’s boyfriend finding out he’s been cheated on nothing can go well. But miraculously by the end of the dance Benji and Victor manage to have a sit-down conversation where they confess their feelings to each other and kiss again! I won’t deny that sparks fly with this kiss but Victor is still technically dating Mia at this point. Victor, you need to stop.

Mia thinks so too when she catches them! Mia is so good, she does not deserve to get her heart broken like this. But Victor completely deserves it when she storms off without giving him a chance to defend himself.

The last scene of the show is Victor finally coming out to his parents after agonizing about it for the entire season. I’m so proud of him for finally being able to say the words “I’m gay.”

Go to season two to see how the parents react…

The thing I think this show does a fantastic job of doing is balancing drama with realism. This show is marketed as drama and boy does it deliver but its drama is not derived from shallow miscommunications and characters refusing to talk. No, the tension in this show comes from the characters talking and not being able to reach a conclusion. Every couple hashes out their issues at the end of almost every episode, but while the communication is refreshing the results are heartbreaking. Isabel and Armando continue having these intense conversations to try and fix their marriage after the affair but things just keep spiraling, eventually ending in them making the painful decision to separate.  This is paralleled in the conversations in which Mia and Victor talk about intimacy, but while the communication is healthy it only drives them further apart. Both couples make it abundantly clear they are not on the same page. Pilar won’t talk to anyone and that furthers her issues. It’s amazing how much of this show surrounds clear communication.

This show really strikes the balance between heartwarming, hilarious, and gut-wrenching. Every single member of this ensemble cast is believable and fleshed out with even the background characters getting character arcs. From leading man Victor to high school bully Andrew to the best friend side characters Felix and Lake, I have no trouble believing that these are all real people with real issues.  The main relationship between Benji and Victor is adorable, the showrunners do a great job of making you root for them, but the show never forgets to make you like Mia. I truly do believe she’s Victor’s favorite person.

In short, if you’re looking for a show that will make you laugh, sob and scream in frustration all in the span of a half-hour I recommend “Love, Victor.”