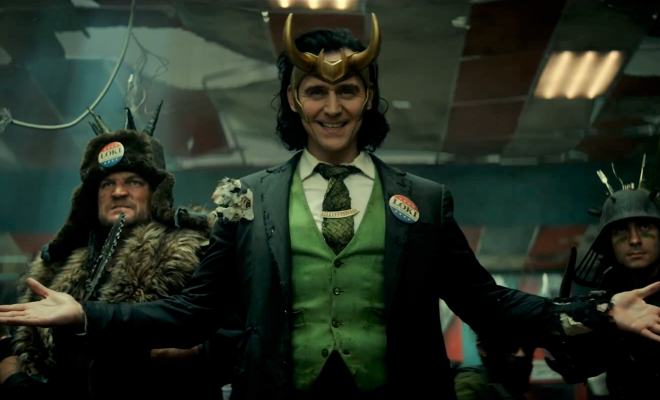 ‘Loki’: What to Expect From Upcoming Disney+ Series

We are just days away from the premiere of Marvel Studios’ highly anticipated series Loki, which will begin airing weekly on Disney+ on Wednesday, June 9th. Loki, portrayed by Tom Hiddleston, made his Marvel Cinematic Universe debut in 2011’s Thor as the scheming adopted brother of the titular god of thunder. Since then, Loki has gone on to play a major supporting role in several more MCU films. But now, 10 years after his introduction, Loki is finally stepping out of his brother’s shadow and being the star that he always felt he deserved to be. Loki will follow Hiddleston’s iconic character at the center of a time-bending crime thriller that is sure to be as chaotic as Loki himself. But every trailer and teaser Marvel has released for Loki seem to raise more questions than answers. With Loki being the god of mischief, it can be hard to know what to expect when he’s around. Don’t worry, that’s why we’re here to help. Here are five things to expect from Loki.

Since his first appearance, Loki has had a bit of a nasty habit of faking his own death, seemingly meeting his end in both of the first two Thor movies before revealing it to be yet another trick. But even a god can’t outrun death forever, something which Loki realized first hand in the opening scene of 2018’s Avengers: Infinity War. After several film’s worth of character development, Loki died at the hands of Thanos while attempting to protect his brother and his people. A fitting and tragic end for a brilliant character…

Except, not really. See, a show called Loki wouldn’t exactly work super well if Loki is dead. This is where things get a little complicated. In Avengers: Endgame, thanks to some time travel shenanigans, the Avengers accidentally change the past and allow a “post-attempting to conquer Earth in 2012” version of Loki escape through a portal using the Tesseract. We don’t see what happens to this Loki in the film, as this is exactly where the Loki series picks up. What this basically means is that the Loki we are following in the upcoming series has not gone through any of the character development that the one sacrificed himself in Infinity War had gone through. He just got done being a villain, and isn’t ready to be a hero quite yet. The only problem is, he doesn’t exactly have a choice.

As seen extensively in the Loki promotional material, the titular God of Mischief will be in the custody of a group known as the Time Variance Authority, or the TVA. The TVA is a bureaucracy (the worst nightmare of an agent of chaos such as Loki) of time travelers who serve to protect the “sacred timeline”, with the change in history caused by Loki’s escape disrupting it. Because of this, Loki will be given an ultimatum: help the TVA fix the timeline, or be erased from it. This premise creates an interesting dynamic for our “hero”. While most MCU stories are about the heroes fighting so they can save the day, Loki is only a hero because he is also a hostage. This ticking time bomb of a setup will likely not last long, as Loki is anything but loyal. If he is willing to stab his own brother in the back to save his skin, what makes you think he will decide to remain loyal to Agent Mobius or anyone else in the TVA? Oh, and speaking of Agent Mobius…

The previous two Marvel shows on Disney+, WandaVision and The Falcon and the Winter Soldier, both featured an ensemble cast of many iconic, and not-so-iconic, MCU characters from previous films. But this is Loki’s story, and there’s room for only one fan favorite character here! While there is always room for surprise appearances and cameos, Loki’s cast is only made of newcomers to the franchise. Loki’s partner in time will be Agent Mobius M. Mobius, played by a mustache-clad Owen Wilson. Mobius appears to be the agent assigned to be in charge of Loki during his time with the TVA.

Rounding out the main cast is Gugu Mbatha-Raw, who will be portraying TVA judge Ravonna Lexus Renslayer, and Wunmi Mosaku, who is portraying Hunter B-15. We don’t know much about these new characters beyond their supposed devotion to the TVA, but this makes sense as Loki likely doesn’t know anything more about them either. Expect any one of them to display possible ulterior motives as the series goes on.

Time travel was introduced to the MCU in Avengers: Endgame and now we’re about to see things get a lot more complicated as Loki delves even deeper into the subject. With Loki being tasked to assist the TVA in their missions across time, we’ll be seeing him in a variety of different eras and locations throughout history and the distant future. As seen in promotional material, Loki will make his way to what appears to be the destruction of Pompeii in 79 AD, a destroyed New York City in the hopefully distant future, and even as what is likely 1971 as the infamous plane hijacker D.B. Cooper. Cooper was the supposed name of a man who hijacked a commercial aircraft, collected thousands of dollars in ransom money, and jumped out of the plane to never be seen again neither dead nor alive. The trailers seem to heavily suggest that Cooper was actually Loki all along (Not as catchy as when it’s Agatha, but it’ll do). Be prepared to explore a variety of other time periods throughout the season’s six episodes.

Like The Falcon and the Winter Soldier, Loki will consist of 6 episodes, with each being roughly an hour each. But unlike either of the previous Marvel series on Disney+, Loki will not simply be a one time deal, as a second season is already being developed. Michael Waldron, known for Rick and Morty, serves as head writer of the series while it is being directed by Kate Herron, known for Sex Education. According to Waldron, the series will take inspiration from a variety of different sources. These include Mad Men, Blade Runner, Rick and Morty, and Teletubbies… apparently. If that doesn’t at least make you curious about what will happen in this series, then I don’t know what will. More behind the scenes details will be showcased in the Marvel Studios: Assembled special expected to air following the conclusion of the first season. Specials for both WandaVision and The Falcon and the Winter Soldier are currently available on Disney+. Catch Loki when it premieres on June 9th only on Disney+.