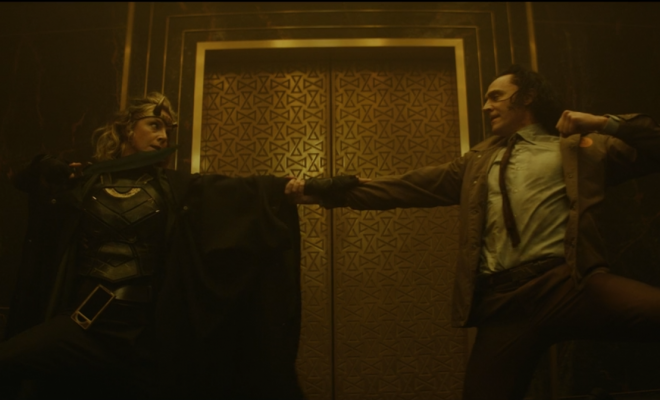 A dangerous game of Cat and Mouse begins, as Loki must outrun the TVA while pursuing his Time Variant.

What could possibly go wrong?

Spoilers ahead for Episode 3 of Loki, titled “Lamentis”

In a cold opening (which is fitting given the brain freeze discussion), we see two “friends” happily chatting over margaritas in a restaurant, both of them looking suspiciously familiar. But just like random people you went to high school with like to post about on Facebook, their friendship turns out to be fake. Although in this case, it was an illusion created by the Loki Variant in the mind of Hunter C-20 to learn how to reach the Time-Keepers (If you want more details on the Time-Keepers, check out our “Easter Eggs and References” video on Episode 2 of Loki).

One important detail from this scene was C-20’s assertion that she remembers the restaurant they’re in. If Casey didn’t even know what a fish was, then her having memories of such a specific location means that it must be a very important place (maybe the margaritas are just really good). Either way, this scene foreshadows major details revealed later in the episode about the members of the TVA.

Fresh off the heels of his escape from the TVA, we reunite with Loki as he arrives in his new destination: the TVA. Loki manages to find and confront the Variant, who is swiftly making her way in the direction of the Time-Keepers, before their fight is interrupted by Ravonna Renslayer. Before the two of them can be Pruned, Loki uses a TemPad to open a time portal, allowing him to escape with the Variant.

Aside from the brief appearances of Hunter C-20 and Renslayer, none of Loki’s ensemble cast is featured in this episode, the most noticeable absence being the complete lack of Agent Mobius. While Sophia Di Martino definitely has excellent chemistry with Tom Hiddleston, the lack of Owen Wilson’s jet ski enthusiast definitely sticks out like a sore thumb after two episodes of him playing such a major role. Hopefully his absence is short-lived and we’ll get to see more Mobius, along with the rest of the TVA members, in the coming episodes.

Loki and the Variant, who says that her name is now Sylvie, fall through the portal and arrive on Lamentis-1, a moon that will be destroyed by a planet rapidly careening towards it. They discover that the TemPad is out of power, meaning that they cannot open a portal to leave without finding some way to recharge the device. Left with no other options, Loki and Sylvie declare a truce so they can work together to escape the doomed moon.

The majority of this episode follows Loki and Sylvie as they travel to find a way off of Lamentis. Beyond this, there isn’t a whole lot that actually happens, at least as far as Loki’s overall narrative is concerned. Instead, what we do get is a lot of character development for Loki and Sylvie. I wouldn’t necessarily say the lack of plot in this episode is necessarily a bad thing, but I definitely would’ve liked to have seen at least a bit more stuff happen, especially since we are now halfway through this season and only have three episodes left.

As I previously mentioned, Hiddleston and Di Martino have very good chemistry with one another, with their characters possessing a bizarrely intriguing sexual tension with one another. But if any character would be attracted to a duplicate of themselves, it would be Loki.

After multiple failed attempts, Loki and Sylvie decide to sneak aboard an evacuation train to recharge the TemPad. The two of them have a conversation where they get to know each other more, including where each of them learned their magic. (Additionally, we get confirmation that Loki is bisexual, which is great!) Their relaxation is cut short, however, as train guards discover their ruse and attempt to remove them from the train. As they fight off guards, an inebriated Loki is thrown from the moving train, forcing Sylvie to jump after him. To make matters worse, the TemPad is heavily damaged from the fall. With all hope seemingly lost for our “heroes”, they decide to try and make it to a spaceship, called the Arc, in a nearby city in the hope that they can escape on it.

Having to travel on foot, Loki interrogates Sylvie on the way about the details of her enchantment magic. She explains how she enchanted Hunter C-20 by using a past memory of hers from her time on Earth, despite Mobius telling Loki that all TVA agents were created by the Time-Keepers. This means that members of the TVA are actually brainwashed time variants, explaining C-20’s vision from the start of the episode. (Maybe this also means that Mobius once was a proud owner of his very own jet ski in his past life.)

Once they arrive at the Arc, the two of them fight multiple guards in an impressively choreographed fight sequence. The fight appears like it was shot in a single take, with series director Kate Herron showing off her talent here. But before they can make it to the Arc, the ship is destroyed by a meteor. The episode ends with Loki and Sylvie completely out of options for escaping with their lives.While I would definitely say that it was the weakest of the three episodes, “Lamentis” was still an entertaining exploration of both versions of the title character. Hopefully, the remaining episodes will be much more eventful while still being as character focused as this was. Let us know your thoughts and predictions down below and be sure to continue following all of our coverage on Loki.