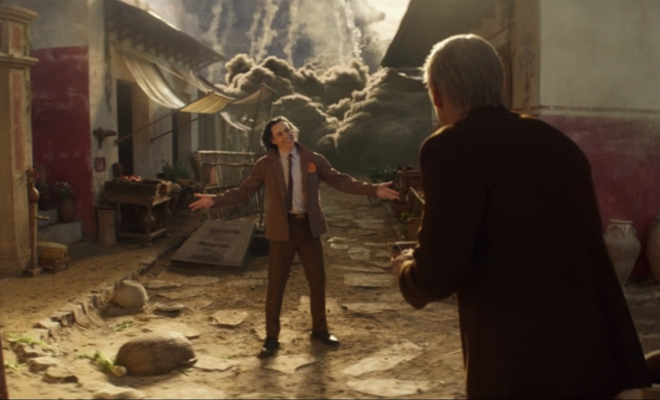 The TVA was holding out for a hero, but what they got was Loki.

It’s this unstable alliance that sits front and center in the second episode of Loki, as the God of mischief is tasked by the Time Variance Authority to assist them in hunting down a rogue Time Variant: Himself.

Spoilers ahead for Episode 2 of Loki, titled “The Variant”

The episode begins long ago in a mystical, far away land: Wisconsin, 1985. (Sidenote: the song featured at the start of the episode, Holding Out for a Hero by Bonnie Tyler, was released in 1984 on the Footloose soundtrack. Nice to see that even the episode’s choice in music doesn’t go against the sacred timeline.)

On the hunt for the rogue Variant, Loki joins the TVA on a mission to a Renaissance Faire in Oshkosh to investigate the scene of yet another ambush on several TVA Minutemen. Loki tries to convince the agents that the Variant is currently staging an ambush on them, which turns out to be a ruse that Agent Mobius sees right through. What I appreciate most about this scene is that it shows that Loki hasn’t automatically reformed following his personal revelation last episode. He’s still a “mischievous scamp”, to put it lightly, who’s only looking out for himself. He may have discovered a new purpose for himself, but that doesn’t mean that it’s a benevolent one, especially since he’s now in the heart of the true power in the universe.

Back in the “present” (I hesitate to even call it that), Mobius insists to Judge Renslayer that he can handle Loki despite his attempted betrayal. Their conversation suggests a genuine friendship between Mobius and Renslayer, something which seems to be in conflict with her role as Mobius’ superior. Despite us only knowing very little about her, Renslayer’s character is already rather compelling and I’m looking forward to learning more about her past, along with her importance in Loki’s overall narrative, in the coming episodes.

His leash tighter than ever, Loki is instructed by Mobius to review all the case files on the Variant to find any clues that can help them. After begrudgingly looking over several files, Loki comes across a record of the destruction of Asgard, as seen in Thor: Ragnarok. We see another glimpse at Loki’s pain and sadness that we saw before. And, like before, Loki’s mourning once again leads him to an epiphany: If you time traveled to an apocalyptic scenario, your actions there won’t create a branching timeline because everything gets destroyed regardless. This leads Loki to the conclusion that the Variant is hiding from the TVA in an apocalypse.

After Loki pitches his hypothesis to Mobius (destroying his lunch in the process), the two of them test this theory by traveling to the city of Pompeii in 79 AD, moments before its destruction. Much to Mobius’ surprise, Loki’s theory is correct, as there are no branches made in the timeline while there. Using a candy left by the Variant at a crime scene, Loki and Mobius do some digging to try and find which apocalypse their suspect is hiding in.

As mentioned in our breakdown of Episode One, the Odd Couple that is Loki and Mobius is an absolute delight to watch. Despite all of the jokes and memes on the internet surrounding him, Owen Wilson is a very talented actor, able to hold his own against the fan-favorite Tom Hiddleston whenever they share the screen together.

One scene in particular that stood out was their conversation about jet skis and how they relate to our place in the universe (as we commonly do). When Loki questions how Mobius could possibly believe that he was created by the Time Keepers, Mobius explains that nothing really makes sense when you think about it. The universe is chaos, leaving you with one of two choices. The first choice is that you can embrace the chaos and declare that everything is meaningless. If we all came from nothing out of random chance, then why bother constricting yourself to meaningless rules. The second choice is to embrace the belonging and purpose that comes with order and structure. Who cares if your explanation doesn’t really make sense? It doesn’t have to make sense for it to matter to you. As Mobius says: “It’s real because I believe it’s real.” Loki chooses to embrace chaos, while Mobius chooses to reject it and accept order. I don’t know for sure if this was meant to be a commentary on people’s belief in religion, but if it was, it resonated with me very strongly. Wilson tremendously sold writer Elissa Karasik’s dialogue in this scene, and was definitely a highlight of the episode.

Eventually, Loki determines that the Variant is hiding in a hurricane in the year 2050. Accompanied by multiple TVA agents, including Hunter B-15, Loki and Mobius travel to the Variant’s hideout to capture him once and for all. Things don’t quite go according to plan, however, as the Variant taunts Loki by possessing multiple civilians and B-15 to communicate with him. While we have seen Loki use mental manipulation in the past, specifically via the Time Stone in The Avengers, the way that the Variant Loki is shown utilizing it appears to be on a level we have yet to see from the God of Mischief.

Rejecting Loki’s proposal to take over the TVA together, the Variant reveals “himself” to be an apparently female version of Loki (also the identity of Sophia Di Martino’s secret character). She sends multiple stolen “reset charges” through time portals before detonating them throughout time and space, splitting the “sacred timeline” into several different branches. This Lady Loki escapes into a time portal and, before Mobius and the other agents can stop him, is followed through by our Loki. Leave it to a show about Loki to literally blow up the fabric of time in only the second episode. While not too much happened in this episode until the end, it was kept from being boring by Hiddleston and Wilson’s dynamic as well as the charming and interesting dialogue by Karasik. What did you guys think of the episode? And what do you think will happen now that time is rapidly branching? Let us know your thoughts and predictions down below and be sure to continue following all of our coverage on Loki.