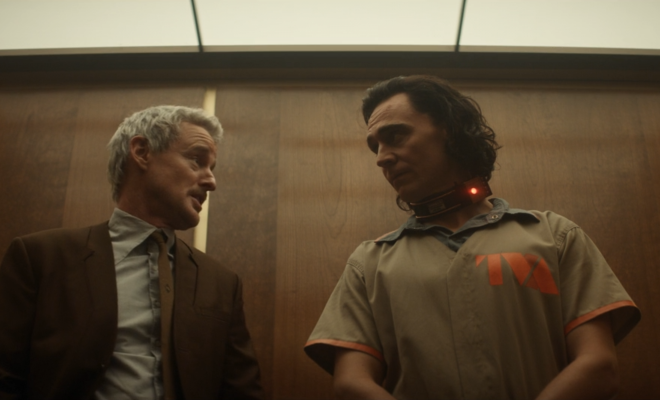 Spoilers ahead for Episode 1 of Loki

The first episode of the newest Marvel Studios series Loki has finally been released on Disney+ for all of us puny mortals to enjoy and it was glorious. Let’s just jump right into it and take a look at the series premiere of Loki, titled “Glorious Purpose”

The episode starts off right where, and when, we last saw Loki: his escape via the Tesseract in an alternate 2012 in Avengers: Endgame. Arriving, or rather, crashing into the Gobi Desert, Loki is quickly captured by a group known as the Time Variance Authority, or TVA. If you want more information on the TVA, or if you’re just a little lost, check out our video on what you can expect from this season of Loki. Anyways, Loki is taken to the TVA’s headquarters, where he is subjected to a series of demeaning bureaucratic procedures enough to bore anyone, let alone the god of mischief, to death. But Loki quickly realizes that this threat of death is very real here. A powerless Loki is taken before Judge Ravonna Renslayer where he learns that he is being tried for being a “time variant” as a result of his escape and is sentenced to be “reset” (which doesn’t sound great, to say the least). We get quite a bit of exposition dumps in this episode, but that’s not to say that this is a bad thing as it is all quite interesting and entertaining.

Fortunately, Loki, the character and the series, is saved from a swift end thanks to the pleas of Agent Mobius. Mobius is hunting down a dangerous time variant responsible for the deaths of multiple TVA agents, and he believes Loki would be more useful to them alive than dead. The two of them talk in a one-on-one interview, which Loki attempts to escape from multiple times to no avail, at least not initially. Mobius asks a series of questions to try and understand Loki and figure out what “makes him tick”. Mobius plays a video showing Loki’s life, accusing the self-proclaimed “liberator” of being nothing more than a murderer. And, considering Loki just got done attempting to conquer the Earth, Mobius’ description of him isn’t exactly unearned. Tom Hiddleston and Owen Wilson play off of one another very well here, showcasing what will hopefully be just the start of their delightful on-screen chemistry.

Mobius’ interview is interrupted by Hunter B-15, allowing Loki to slip away and attempt to make his escape. This is short lived, however, as Loki finds dozens of Infinity Stones serving as nothing more than paper weights. Keep in mind, the Infinity Stones have been shown to be some of the most powerful objects in the MCU, with Thanos using them to destroy half of all life in existence. So seeing them collecting dust here hammers home that Loki truly is at the mercy of the greatest power in the universe. Returning to the interview chamber, Loki plays the tape to see his future, witnessing the deaths of his mother, his father, and even himself in past films.

This scene is by far the highlight of the episode, with Hiddleston delivering an emotional performance as Loki comes to realize that he truly did have a place among his family and that he would’ve been more than the villain he felt destined to be by some “glorious purpose”. These tragic elements of belonging and identity are what make Loki stand out as more than just a simple charismatic villain to fight the hero. The episode ends with Mobius finding Loki and telling him that he needs his help to fight the real villain: Loki. Or, at least another dangerous variant of the god of mischief killing TVA agents.

All in all, I very much enjoyed this first episode of Loki. While there was a large amount of exposition, the unique world, entertaining writing, and the superb performances of the cast all prevent this from being an issue. I’m very excited to see where the remaining five episodes lead and if this evil (or, more evil) version of Loki is truly who we are told he is. Sophia Di Martino and Richard E. Grant are both due to appear in the series, with neither of their roles being revealed. Expect either, or even both of them to possibly be behind it all. Let us know what you guys thought of this episode and any of your predictions or theories on what will happen next.