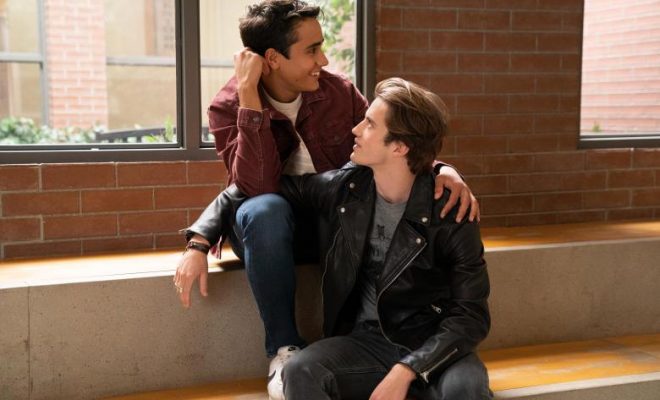 Now that season two of Hulu’s “Love, Victor” has dropped, it is time to talk about all the new relationship drama we got to see this season. From adorable moments between Victor and his now-boyfriend Benji to fights between every character in sight, this season has a lot of things to talk about.

Season two opens where season one left off, with Victor telling his family that he’s gay. Pilar reacts wonderfully, giving her brother a hug and telling him she loves him. His parents? Not so much. Armando seems mostly confused, but Isabel looks disgusted. Between this and the separation, parental strife is a major theme of the season.

It only gets worse from there. After a time skip this season begins at the end of summer, Victor and Benji are now in a committed relationship and man are they adorable but Isabel doesn’t think so, she can barely stand to look at her son anymore, refuses to have Benji over and refuses to admit that Victor has a boyfriend to anyone, especially Victor’s youngest sibling Adrian. Homophobia is not a good look on her.

But not everything is bad. Lake, Felix, Benji, and Victor have gotten close over the summer, and their friendship is heartwarming. The chemistry in this cast is really amazing. I truly believe that they all care for each other. Unfortunately, though, our wonderful Mia had decided to run away to summer camp that summer, cut all contact with her school friends, and came back a complete fifth wheel.  I truly do feel for her, watching her struggle through this isolation is a gut punch, but I do not agree with the revolving door of bad decisions she makes this season.

If last season was all about internal validation, season two deals with the fact that you can’t change the way others see you. From nasty rumors started about Mia and Victor’s break up at Creekwood High to a pastor telling Victor that he’s going to Hell there’s a lot of themes of external validation to see here.

What I found most interesting was how this season explored what societal pressures can do to relationships. Benji and Victor, though they had a perfect summer, begin crumbling as soon as school rolls around again because their new relationship is put under a spotlight. Victor refuses to come out to the school and they fight, Victor comes out, gets kicked out of the boy’s locker room, and they fight, Benji tries to act cool around his friends but ends up hurting Victor in the process, and guess what? They fight. All of this is because of the pressures society put on them to act a certain way or to do a certain thing. And this is not the only relationship that falls prey to that;

Felix and Lake have been in a pretty adorable relationship through the entirety of the second season, but Felix is dealing with some trouble at home. It’s revealed in the first season that his mom, Dawn,  has manic depression and is expanded upon in this season when we find out that she’s been in a depressive episode for months and can no longer take care of herself. Because of this, she’s lost her job and rent is past due. Felix tries his best to be the provider for the house but the boy is a teenager, and writing people’s essays for them in exchange for cash is just not cutting it. So Lake, trying to be a supportive girlfriend, steps in. She tells her mom about what Felix has been going through and her mom makes a welfare check, just to make sure things are okay.

Things are not okay. Felix is embarrassed that he cannot hide his situation as well as he was ‘supposed to’ and takes it out on Lake, accusing her of breaking his trust and ultimately breaking things off with her. Dawn, embarrassed that anyone saw her like that, storms into Lake’s mom’s place of work and has a complete mental break, ending up committed to a hospital on a psychiatric hold. Personally, though I think the portrayal of mental illness could’ve been handled a little more delicately, the effects that Dawn’s manic depression had on everyone around her and the societal stigma of it all were fairly well done, I definitely cried at this subplot.

Lake might’ve broken Felix’s trust but you know who hasn’t? Pilar. Between giving up Billie Ellish concert tickets to help Felix with his rent to staying up late watching quiz shows with him when he’s sad about his mom, our girl has a crush.

And it just might be reciprocated if that kiss at the end is any indication.

Speaking of new love interests, our boy Victor seems to have found himself in a love triangle, again. Benji and Victor are on the rocks this entire season, not for lack of trying mind you. Like season one, season two is full of amazing conversations trying to hash out relationship issues, but it’s just not working. This new boy, Rahim, is not helping things. Rahim is one of Pilar’s friends, and comes to Victor for advice about coming out to his Muslim family. Sparks don’t immediately fly but Rahim quickly becomes one of Victor’s closest friends and confidants.

Victor tells this boy everything, even things about Benji that he was told never to tell anyone. I mean Victor, come on. Trust is given and it can be taken away. And, of course, Benji takes it away. As soon as it’s revealed that Victor told his deepest, darkest secrets to someone who’s basically a stranger to Benji, the golden couple goes on a break and who does Victor run to? Rahim.

Don’t get me wrong, Rahim is a sweetie and I’m all for seeing where their relationship goes if there is a relationship to be had, I’m just angry about how it started. Rahim decides that Victor needs a day of pampering that is completely Benji-free, so they play hooky from school. They go get lunch, go get their nails done, have an existential conversation about being perceived as masc versus femme, and how society treats you based on that. Truly, an adorable date.

Except, Benji and Victor aren’t broken up yet. They’re on a break! Victor, the pattern of emotional cheating is starting to concern me. Anyways, Rahim and Victor end their night at a gay club singing a love ballad at each other, and at this point, I give up. Their voices are amazing, but come on guys, either break up with Benji and move on or put some serious boundaries into place.

Well, good news, Victor’s mom Isabel puts those boundaries up for them after she catches them at the gay club. Apparently, Victor left his location on his phone. Rule number one for sneaking out kiddo, turn that thing off. Victor’s mom has gone through an incredible journey this season along with her recently separated husband. The audience gets to watch as she grapples with the prejudices she internalized as a child. Starting off the season with all but banning Victor’s boyfriend from her home and ending it by telling off a priest, quitting her job at the church, and trying to get Victor and Benji back together. Her husband Armando has a similar arc, starting off the season being very uncomfortable around Victor and ending it by being a vocal member of the local PFLAG chapter (Parents, Friends, and Family of Lesbians And Gays) and finding a way to be settled with his machismo and being the father of a gay son.

Because of that character growth, we get to see these parents come back together at the end of the season, awkwardly asking each other to share a pint of ice cream like it’s a first date all over again.

Oh, but if you were hoping for a reconciliation for any of the other broken-up couples at the end of this season, I have some bad news for you; you’re going to have to wait for season three to see if it happens at all. Because the finale of season two leaves us with all the questions and no answers. First of all, we see Mia, who has had some mysterious emails from the mother who abandoned her throughout the show, taking off in a car to go meet her for the first time. And then there’s Lake, asked on something that’s definitely a date by a woman, she says yes and I am on the edge of my seat waiting to know where that goes. Felix kisses Pilar at their apartment building. And Rahim confesses his feelings to Victor right in front of Benji leaving the boy stuck wondering which man he should choose.

Apparently, he decides because he takes off running towards a house. We watch with bated breath as the door opens, and nothing. Fade to black.

I guess we’ll all have to stay tuned for season three. Like season one, season two of “Love, Victor” had me laughing, crying, and shaking my head over these characters. It is dramatic and wholesome all at once and it is the perfect thing to round out your Pride Month. If you haven’t watched it already, check it out on Hulu. Happy Pride everyone!