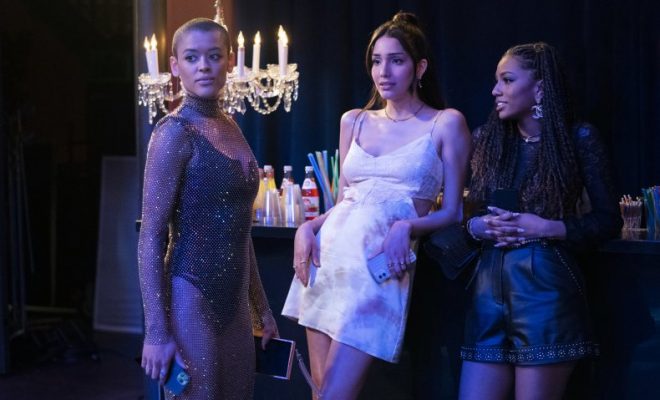 This Article was updated on August 25, 2021 by Riley DeBoer

In this very special episode of Gossip Girl, we are celebrating Zoya’s birthday, something guaranteed to bring plenty of trouble. Zoya doesn’t like to celebrate her birthday on the exact day, since it is the same day her mother passed.  She wants a normal day but is self-aware enough to know it is going to be anything but. Here is our breakdown of Episode 4 of Gossip Girl (2021).

When Julien wakes up, she sees that her father has Lola over.  It is a bit uncomfy for them both, but that’s what happens when your dad has been hiding a secret girlfriend. To her father’s credit, he’s trying, and that is worth some points. At school, Obie is making sure that the day is anything but normal. When Zoya arrives, Obie realizes that he made a mistake in making the day so extravagant.  Julien comes over to wish Zoya “Happy Birthday,” but is snubbed. At the same time, Audrey and Aki are still struggling with the Max situation.  She is struggling with the fact that Aki kissed a man.  Is he gay? Bi? Julien encourages her to talk to him.

Gossip Girl is proving to be a full-time job for Katie Keller, and she is not handling it well!  The other teachers implore her to let them help out, and she very reluctantly agrees.  Rafa confronts Keller in the hallway and asks if she knows anything about Max.  He hasn’t shown up to classes in a week!

Obie apologizes to Zoya in the yard. He asks if they can just have dinner with her dad.  When she calls her dad to ask, we find out that Luna planned a big surprise for Zoya.  Zoya and her father have been living in their grandmother’s house without her present. Luna told the housing board, which means the Lotts could be evicted!

Julien believes that Zoya is planning an attack on her, and Monet and Luna are loving it.  They tell her to throw a party so that whatever plan Zoya has will be ignored. Zoya is also struggling with Julien!  She decides that she will throw a party in retaliation! Obie continues to struggle with the changes he sees in Zoya, and then he leaves.  After that, a strange child named Milo shows up to offer Zoya help. Katie finds Zoya and wishes her a Happy Birthday. Zoya shows her the Gossip Girl Instagram story, and Katie is shocked to find herself blocked. When she confronts her colleagues, they refuse to unblock her until she writes a story.

Zoya arrives at Milo’s house and says he is going to help Zoya get Julien canceled.  After an old tweet of Julien’s resurfaces, everyone begins to rescind their invites to her party. Julien decides that the best course of action is to use her mother’s death to get people back to the party.  That’s when both of their dads (more Nick Lott!!!) show up to discipline these children.  They want the fighting to end, and they decide to make the party into a joint affair celebrating their mother.  At this point, an angry Julien decides she will leak the video of why Zoya got kicked out of her old school.

Things are anything but civil at this party! Zoya has changed into a different person, and Obie does not like it. Audrey attempts to make Aki jealous by showing up with a new man. Max attempts to get into the party, but he is unable to get inside.  He has clearly been abusing narcotics, and Rafa confronts him.  He takes Max away from the party. Julien’s dad offers to help with the housing situation, but Nick Lott resists.  Zoya discovers that Milo has been getting Julien drunk, through the food she is eating.  Audrey realizes she just needs to ask Aki about his sexuality, but when she asks, Aki doesn’t know the answer.

Julien is set to give a speech, but she is now extremely drunk. During her drunken speech, Julien goes off the rails. She shows everyone what happened in the video. Drumroll… It is Zoya spray painting “fuck this school,” onto the walls, then getting locked into a classroom, where everyone taunts her for killing her own mother. Julien, who hadn’t seen this version of the video, is quite shocked at how bad the bullying got.

Julien gives an improvised apology, and then confesses that she is a bully herself. She vows not to bully again. While the two are alone, Zoya tells Julien what actually happened in the video. She explains that the whole thing was a setup to get her alone and for them to taunt her. Zoya blames herself for her mom’s death, and Julien apologizes that she never knew this. They are once again going to attempt to be sisters, but we will see if that changes.

Aki and Audrey talk in the hallway. He says he isn’t gay, and he thinks he might be bi. He loves Audrey, and she apologizes for sleeping with Max. Obie and Zoya make up and make out over a dance, and then she leaves to spend her birthday with Julien. The episode ends with Max coming to Rafa’s house. His father blamed him for everything, and Rafa tells him it wasn’t his fault. This sparks them to hook up.

For more of our thoughts on Episode 4 of Gossip Girl, make sure to check out our video below!

If you haven’t already, you should check out our breakdown of the previous episode of Gossip Girl. And if you like Gossip Girl, be sure to check out our coverage of Power Book III: Raising Kanan and Queen Sugar.