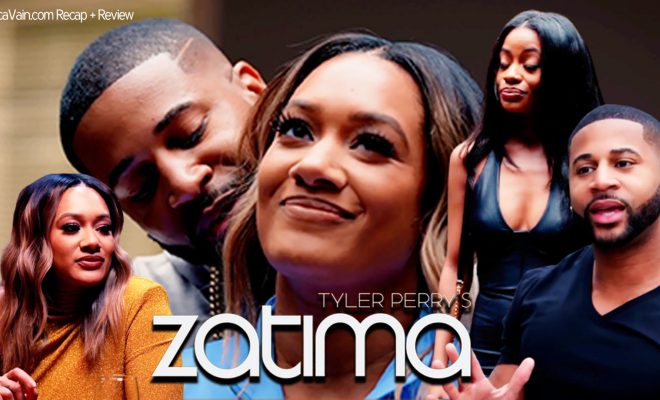 This Article was updated on September 22, 2022 by Erica Vain

The Zatima series opens at Fatima’s place as the fan-favorite couple grabs the last bit of things, moving over to the duplex from Fatima’s home. She, in a little moment of questioning, wonders out loud if they are moving too fast, and this is one of the very few times that I feel like this couple has actually addressed this. Zach reassures her while also stating exactly where he feels he falls in the realm of all of his baby mama drama: he has an ex-girlfriend that’s pregnant with what may or may not be his kid, and he is 100% sure that Heather Jenning’s kid is not his kid.

When Fatima meets up with her girlfriends at the bar, I love that they jump right in and address that we have not seen them in the Sista’s universe or heard them simply mentioned prior to now. They do not shy away from addressing the fact that this is a new introduction of characters and the core people in Fatima’s full life, but it sets us up to really understand the timeline thus far.

Belinda and Angela go as far as to literally point out, “girl, you have been missing for weeks,” and over the course of the Sista’s universe conversation with Zach and Fatima and them getting together, it’s probably been no more than six weeks.

What sticks out about the conversation they have, about the boys, as Angela’s talking about her new guy after Fatima tells them her new guy has been a big part of why she has been away, is that they don’t actually mention the men’s names.

Simultaneously, we catch up it with Zac and his boys at the basketball court, and we get to see exactly why these guys have not been in the picture, at least on screen in the timeline of Zac’s story.

ZAC’S FRIENDS IN A NUTSHELL

Bryce is the new guy in Zac’s life, seemingly taking the place of Jake in Sista’s as the hedge fund homie who is looking out and Zac’s brother from another mother. Nathan is the miserably married and utterly incompetent (just calling it like I see em) man who no longer believes in love. But with a wife and two kids in, what you finna do. It’s not clear what his occupation is. Tony rounds out this misfit bunch of friends as the incel-ish (again calling in as I see it) single friend who wouldn’t believe in love if you paid him to, but it’s also unclear what anyone pays him to do.

The general breakdown of what happens when men fall in love is completely asinine from the POV of Tony and Nathan however it probably speaks to quite a few men’s perspectives in real life and why we tend to struggle in love.

DO ZAC’S FRIENDS WANT HIM TO BE HAPPY?

The black homeboys are appalled by the fact that Zac just moved in with Fatima, and all I could think about is where the hell was yall when Zac was moving into this duplex, where were yall as Zac was on the come up when he was trying to fight for Karen and only had that damn bike to his name? They are way too negative not to have been there shooting in the gym. Shout out to Lori, Nathan’s wife, who comes in and interrupts the guy’s being stupid, completely shifting the mood and focus of conversation but also letting us know exactly what situation he is in and why he speaks so negatively about marriage.

Andy isn’t the only one with a man buying a whip for her as Zac gifts Fatima with a stunning and sexy black drop-top expensive coop that happens to be Fatima’s dream car the next morning.

Fatima showing up at the strip club that Heather Jennings is beyond me. It’s an overstep. I get protecting your relationship and standing by your man, but I feel like Zac should be the pursuing one here.

IS FATIMA DOING TOO MUCH?

He should be the one leading the charge to get the DNA test with this kid and set the record straight instead; he decides to play back and allow Fatima to do what Fatima wants to do. He has no clue what she really wants to do.

The episode ends with the friends meeting the girlfriend and boyfriend for dinner at the house, and Belinda is running late. In perfect timing when they have an awkward moment about getting married because Bryce here’s wedding bells for Zatima and Zach is like “slow down.” Little miss Belinda shows up and then “surprise” they actually slept together, and that’s where the episode ends with a nice intro to all of the new players in this part of the Sista’s Universe and a clear cliffhanger of what will Fatima and Zac do now, more skeletons falling out the closet.

Wanna watch the breakdown of this episode? Subscribe to EricaVain.TV for daily videos and breakdowns of ZATIMA.