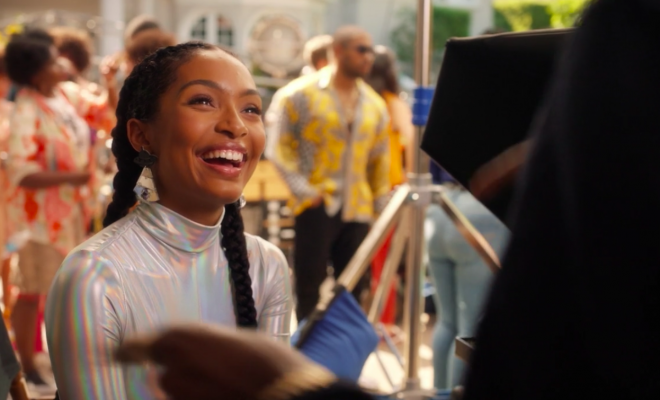 When we last left Zoey she had just dropped out of Cal- U to pursue her styling career full-time.

But not to worry as she is currently thriving, living her best life, working on the set of a music video in Mami. And who is her second celebrity client you may ask, none other than Indigo a.k.a Saweetie. That’s right what more can a college dropout ask for?

Speaking of college, Zoey is supposed to go back to Cal- U to visit her friends and her on- again off again crush Aaron. Except for this time, she can’t get him off her mind. In fact, she is so nervous about seeing him after they kissed that she seeks advice from none other than Indigo. Saweetie, I mean, Indigo gives some great advice and tells Zoey to take control of the situation and just go for it. And go for it she does. She sends Aaron a text admitting her feelings and he replies saying that he wants to “hook-up” when she gets back. She is on cloud 9, but little does she know that she is about to get hit with some cold hard reality.

Because, as it turns out, Zoey and Aaron don’t have the same idea when it comes to what the phrase “hook-up” means. You see when Zoey came back to Cal-U to go see Aaron she was expecting them to be together. But Aaron’s idea of what that text meant couldn’t be more different.

In fact, when Zoey ran into Aaron, she also ran into his new Girlfriend. That’s right rat tail boy got a girlfriend while Zoey was away. And to make matters even worse, he proceeded to tell her that he is done with her games, and doesn’t trust her with his heart after being let down one too many times.

Ana advises Jazz to manage her feelings and not get so strung up over petty things. Facts. While Vivek advises Doug to hit up other girls and not just sit around and wait.

With so much confusion in the air, Jazz and Doug decide it is best to break up for real this time. Just as I was trying to get over the whole Aaron and Zoey situation, I now have two relationships to grieve.

Well, maybe three? Luca and Jillian were doing all good until he gives her his key to the loft. And while I was ready to celebrate this new step in their relationship, turns out Jillian wasn’t. Jillian dropped an absolute bomb on Luca and told her that she was engaged last year and that she doesn’t want to move too fast again. Luckily they talk it out and reconcile their differences.

But there is some great news. Nomi had her baby, Luna, I am excited to see meet her baby when Nomi comes back.