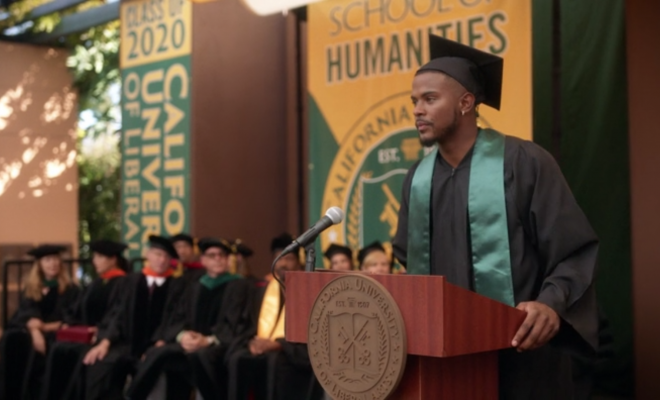 This week we are breaking down the heart-wrenching, soul-crushing, shade-throwing, roller coaster of emotions that was the Grownish Season Finale.

Let’s get into it!

The episode kicked off with Cal U’s big graduation ceremony. And our favorite graduate and social rights activist was center stage. If you recall, the dean made an offer with Aaron a few episodes pleading with him too speaking out against the administration regarding the whole “investing tuition money into private prisons thing”. In exchange for his compliance and silence, they were going to forgive all student loan debt. Seems a little problematic to me.

Aaron was not going to settle for their pathetic attempt to silence him. And he did not miss any opportunity to take a stand and shoot down the administration. Quite gracefully might I add.

Aaron outdid himself and put on yet another show-stopping protest in orange prison jumpsuits. And this time he got all of his fellow graduates to stand in solidarity against the school’s racist business venture. He was not going to take no for an answer.

After his successful protest and graduation, it was time to celebrate. But unfortunately, instead of getting to party it up with the guys, the only thing occupying his mind was the Zoey and Rochelle situation.

Seeking clarity, Aaron asks Doug and Vivek what they think he should do, and unfortunately, they weren’t very much help.

Going to clear his mind, Aaron runs into Zoey. And oof is it awkward. But their awkward interaction quickly gets interrupted by Rochelle’s announcement that Cal U has officially divested. And Aaron and Rochelle seal this milestone with a kiss, leaving the situation with Zoey more sad than awkward.

Zoey goes home to sulk when she finds Luca creating a vision board. Zoey tells Luca about what went down with her and Aaron and desperately asks for advice. Not going to lie Luca’s pep talks are some of my favorite because he is always speaking the truth no matter how harsh the reality is.

And by no means was Zoey an exception. He threw some major shade at her when he said that they deserve each other. I mean he is not wrong after she actively engaged in cheating with Aaron. Meanwhile, both of them were way too caught up in their own feelings to even notice that Rochelle was there. Like Luca said they’re perfect for each other.

Zoey heard Luca loud and clear and right after texted Aaron to meetup. She apologized for all the back and forth throughout the years and confusing messages. She then told him to stop worrying about making a decision between her and Rochelle because she was pulling herself out of the race. Looks like a game over for these two.

But Aaron isn’t having it. He has waited too long to be with Zoey. And just like Cal U he is not about to take no for an answer. So he goes over to her place and tells her that he wants to be with her and they kiss. This is truly the moment I have been waiting for.

But Aaron isn’t the only one making big moves in this heated episode. Doug still can’t get over the fact that Jazz slept with Ricky while they were on a break. Jazz doesn’t want Doug to keep resenting her and decides to cut her losses and break up for real this time.

I know they have been back and forth in the past so many times but something about this time just hits so differently. I really hope I am wrong but we will have to wait until season 4 returns this summer to get some answers.