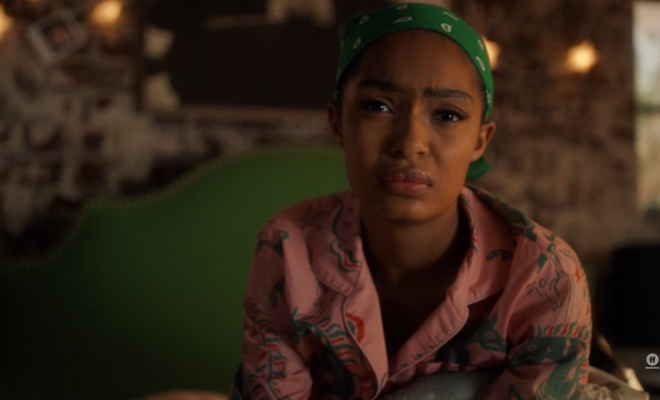 This week’s episode was nothing short of an emotional rollercoaster. Where to even begin! Let’s start with our Harlet miss Zoey Johnson.

Zoey finally got what has always wanted, her chance to be with Aaron. Well let’s be honest she had several chances but maybe this time things will work out in her favor.

But unfortunately, her fantasy is not all it’s cracked up to be. While Zoey tries to romanticize her and Aaron’s future together, the cold hard truth comes crashing down all around her. She is the other girl, in this situation. Not to mention she did not win fair and square but rather cheated her way into Aaron’s heart.

Tensions skyrocket when Aaron goes over to Zoey’s place to talk about the night they shared together. Their conversation quickly transforms into an all-out fight. Aaron gets mad at Zoey because she can never seem to make up her mind about being in a relationship. All she does is float around, wreak havoc, and drift away.

Zoey, however, is frankly quite sick and tired of hearing how flakey she is. (Even though it’s technically true, but nice job to stand your ground) She tells Aaron that this time she has got her mind made up. She is even planning on re-enrolling at Cal-U after quitting her job. Their fight is a hot mess to put it nicely. They both are being incredibly selfish and not even taking Rochelle’s feelings into consideration. They really are a match made in heaven.

A few days pass and Zoey receives a text from none other than Rochelle. Rochelle asks Zoey if they can talk face to face, and Zoey is quite unnerved. I mean I would be too if the girl whose boyfriend I just hooked-up with behind her back messaged me. Zoey is convinced that Rochelle knows about what went down between her and Aaron and she has got her Timberland’s on and ready to throw down.

But to her shocking surprise, Rochelle apologizes to her. Not going to lie I was lowkey hoping to see them throw hands. Rochelle even goes as far as to say that she wants all three of them to be friends. I am not sure how Zoey is going to recover from this one, but if she not feeling guilty right now she better start.

While Zoey is currently trying to navigate the chaos that is her love life, Jazz and Sky are trying to digest the aftermath of the Olympic trials. Sky made the cut but unfortunately, Jazz did not. But weird Jazz is super happy about the situation. Sky being Sky is suspicious of Jazz’s cheery attitude and presses her about the situation.

At first, Jazz tries to brush it off but finally admits to sky how devastated she is. While she is proud of Sky she always imagines crossing the finish line with her. She is sad to know that her long and time-consuming journey is over.

But that is not the only journey that has come to an end. Jillian is going with Sky to Tokyo and then traveling before she returns home. It looks like is sadly the end of the road for her and Luca. What a shame because they were so cute together.

Next week is the Season Finale and I am interested to see what comes of Zoey and Aaron’s relationship. Will Zoey tell Rochelle about her affair with Aaron? Let me know in the comments what you think.