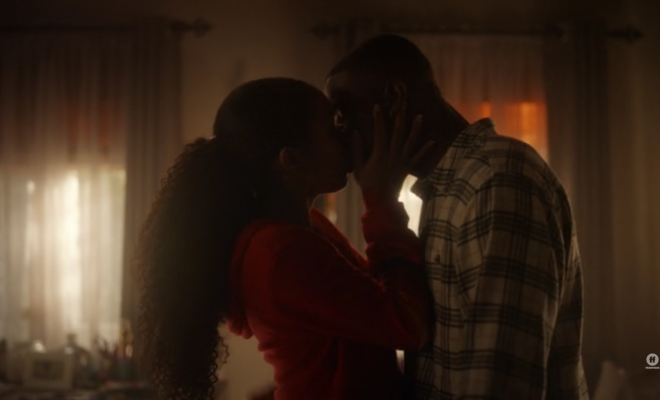 Nomi’s baby mama drama has got me all feeling all the feels this episode. She taking some much-needed time to marvel at some of Baby luna’s major milestones. Let’s just say Luna is really making that camera work for her. So adorable!

But playtime ends when Nomi’s baby daddy shoots her a text wanting to link up. Anna encourages, and by encourages I mean strongly suggests that Nomi meets the father of her baby. Nomi is not here for it and declines the offer, but Anna takes it upon herself to meet him.

She goes to Titanium to meet Phil. But I would say it was less of a friendly get-together and more like an interrogation. For Ana, nothing is off-limits, she asks him all of the hard-hitting and uncomfortable questions and rightfully scares him away.

But Nomi finally musters up the courage and decides to meet him in hopes to find out more about her baby daddy. They hit it off really quickly and Phil seems to know a lot more than Nomi does that night. It sounding more like a whole-ass romantic date than a one-night stand and I’m here for it.

He takes her back to his place and recreates a scene from Sixteen Candles moment because he remembers that it is her favorite movie. I’m low-key simping for this man.

Nomi tells Luca about the night they shared together and he tells her how messed up it was to keep Luna from him. It’s at these moments really cherish Luca’s famous pep talks.

Luca suggests never telling Phil at this point, Nomi has decided it is in everyone’s best interest to tell him. The episode then leaves off with a cliff-hanger while we desperately wait to hear his response.

Meanwhile, Aaron’s also going through his own shit. He is currently trying to get back into Rochelle’s good graces as he messed up by confiding in Zoey about his “dean” situation before her. Ouch! But Aaron has some charming tricks up his sleeve. He runs into Rochelle and gives a very sweet and thoughtful apology. Looks Aaron is in the clear.

Well… that is until Zoey quits her job and moves back in with the girls at Cal-U. While on the road, there is a rumor going around that she hooked up with her boss Joey. Indigo advised Zoey to be more careful with how she presents herself in the real world, telling her to “grow the F, or get the F out”. And surprisingly that must of struck a chord with Zoey as she quits immediately when she realizes that she has got more growing up to do.

Aaron talks to Zoey and tells her how he needs to fall back in order to preserve his relationship with Rochelle. But Zoey shocks him when she reveals that Rochelle has already confronted her about stepping back. He gets upset at Rochelle and asks Zoey why she never told him about their interaction. In a surprising turn of events, Zoey casually admits that she is in love with him. Their anger quickly turns into a passionate make-out session.

Honesty I am here for it. I mean I low-key feel bad for Rochelle but I have been waiting for the day when Aaron and Zoey finally got together.

I am interested to see what tricks Aaron can pull to get himself out of this mess. I am not as confident that he will be able to salvage this one.

LIL MURDA and UNCLE CLIFFORD might not get back together... FIRST LOVE!! | STARZ P-VALLEY SEASON 2
YouTube Video UCwsEBnYPDGhlF7IrbNTLKaw_s-_jZjoxpx0

AARON is NOT the DADDY... or... UMM. well! ZAC could still be the DADDY!| BET SISTAS SEASON 4
YouTube Video UCwsEBnYPDGhlF7IrbNTLKaw_XrfYVttU7zQ
Watch More... SUBSCRIBE