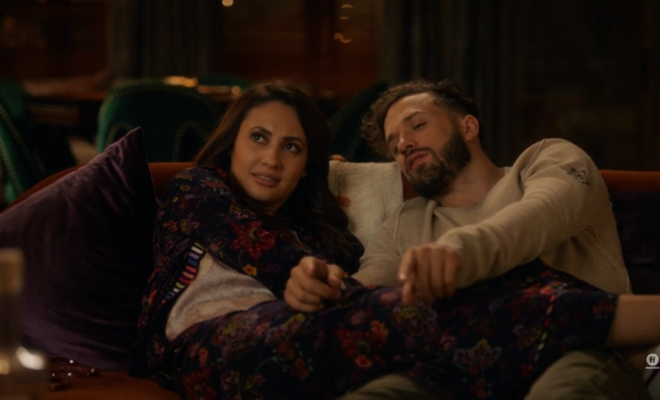 Ana and Javi’s relationship has been going really well. But it looks like there might be a competitive third wheel. Well, it is not really a “who” it is more like a “what”. And that third wheel’s name is Jesus. Yep, that is right Ana has gotten into a pretty serious relationship with her Lord and savior. She is so committed in fact, she decided to reclaim her faith and got baptized.

But everything gets a little bit more complicated when Javi decides to sleepover. She is now at crossroads and has to decide who she will be more faithful to. Her patience is tested and she caves. She and Javi end up breaking their celibacy vow and sleep together. At last, this long-awaited pursuit finally happened.

Unfortunately, it wasn’t everything Ana had anticipated. This encounter only left her feeling more guilty, confused, and dissatisfied than ever before.

Well speaking of third-wheeling, Jazz and Doug have been doing a lot of that since their unfortunate breakup. Turns out everyone is linking up except them. I mean even Vivek has got a girl at this point.

Doug goes to the bar and tries to play the field but he finds no luck. Jazz on the other hand tries her best to avoid the dating scene. However, when she treats herself to a dinner date she ends up meeting a guy. They end up sharing a few slices of pie and he even texts her the next day.

But when push comes to shove, Jazz finds herself deleting key-lime boys’ number. Turns out Jazz and Doug are taking this whole-break-up thing a lot harder than expected. They still can not get each other out of their minds.

Speaking of our other favorite single lady, Zoey, she has been doing quite well since dropping out of Cal-U. Not only is she working for Joey Badass but she has also got another full-time gig styling pop-star Indigo. At first, Zoey tries her best not to get under Indigo’s skin and says yes to everything. But Indigo wants Zoey to be straight with her. No bullshit.

So Zoey decides to be brutally honest with her. After finally speaking up, Indigo claps back and threatens to fire her. Excuse me. Sis needs to make her mind, does she want the truth or not.

But Zoey stands her ground and luckily get’s rewarded. Turns out Indigo was testing her all along. And only a few feelings were spared. But hey she got to keep her job so I guess that’s a win.

But back to the whole Ana situation. Ana is so desperate that she seeks guidance from none other than Sky. I was surprised too but apparently, she really needs a wake-up call and if anyone is going to give it to her straight it is most definitely Sky.

After their talk, Ana prays it out and decides it’s finally time to address the elephant in the room. Javi and Ana talk and realize that something in their relationship needs to change. They decide to commit to celibacy and their relationship again. Looks like the happy couple finally got their rhythm back.