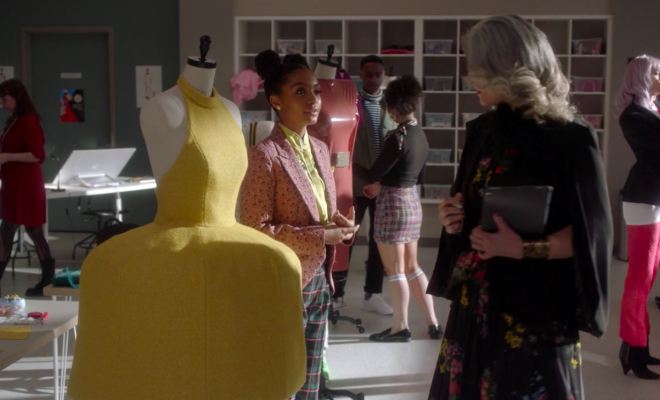 It’s season 2 and Luca and Zoey are officially dating! Team #Zuka for the win. It’s been three months since Luca and Zoey have seen each other. Luca spent his entire summer in Paris and Zoey can not wait until she can see him. She anxiously waits for him to text her that he is back at Cal-U. She waits and then waits some more. Turns out he got back hours ago and was just too tired to text her and remind that he was not only on the same continent but the same campus as her.

You know It’s not like she been patiently waiting or anything.

Anyway, through lots of ups and downs, they finally get back into the swing of things. That is until Zoey’s breakdown in design class. At this point, she is questioning if she even has a talent or likes design anymore. And it definitely doesn’t help that her boyfriend is a fashion prodigy. Not living in his shadows or anything.

In fact, she is so unnerved and jealous of Luca’s effortless talent, that she strikes up a fight over it with none other than Jazz. Jazz is over her whole “poor me” spiel and wants Zoey to come back down to earth.

After some serious soul searching, Zoey realizes that she no longer loves design anymore and decides to drop the class to focus on her friends and her boyfriend.

She almost regrets her decision when the First Lady, Michelle Obama decides to stop by their design class.

Luca is stressed out trying to make the perfect dress in hopes Queen Michelle herself will notice. Zoey helps him out, and together with his design skills and her talented styling skills, they grab her attention.

Zoey can now see clearly and decides that she wants to become a professional stylist.

Relationships are complicated and Nomi decides to ease her pain by hooking up with straight girls. With the help of her gender studies professor, she comes to the realization that she is finally ready to tell her parents about her sexuality. She also comes to the realization that she actually likes her gender studies professor and wants to be in an intimate relationship with her.

However, Nomi isn’t the only one finding herself in an unlikely romantic relationship.

Turns out mortal political rivals, Ana and Aaron are getting quite comfortable with each other. Two secret relationships.

While Ana, Aaron, and Nomi are living their best life, Zoey’s on the other hand is falling apart.

After a night of one bad decision after another, Zoey winds up sealing her fate by cheating on her Chem final. She gets caught of course, and almost gets thrown out of Cal-U. But luckily instead she gets put on academic probation. Unfortunately, academic probation isn’t what Zoey’s dad had in mind and decides to cut her off until she can start making better choices.

Oh and to top it off, not only is she on academic probation, and financially cut off, but Aaron accidentally tells her that he and Ana have been hooking up. Looks like Zoey’s world is tumbling down. To make matters even worse, Luca and Zoey get into a fight over the whole Aaron situation. Apparently, Luca doesn’t like how mad Zoey is about it considering the fact that she is in a relationship with him…not Aaron. Zoey’s the true queen of making bad decisions at this point.

But, nevertheless, Zoey is committed to turning her life around and even takes a series of odd jobs to help her make some more cash. During one of her shifts as a requisite box girl, she uncovers that Nomi is dating their old professor. Zoey gets into a fight with Nomi over it and questions her judgments. Nomi is rightfully offended, but it unintentionally forces her to take a deeper look at her relationship. Nomi ends up breaking up with her.

Zoey and Aaron support each other through their passions. After their conversation, Zoey decides to major in the sociology of fashion major and Aaron decides to start a campaign for Black Mental Health Awareness.

Aaron throws a big met gala to raise money and invites Joey badass Luca’s idol. Zoey tries to help Luca by talking to Joey and ends up with an opportunity instead. Zoey is scared to tell her boyfriend that she actually got his dream and not him. But after a series of guilt-ridden nightmares Zoey ends up telling Luca and they fight.

Zoey has been hard at work setting up the pop-up shop, for Joey. The entire time Luca and Zoey have not had any contact.

At the premiere, Zoey and Luca break up. Zoey decides to focus on herself and her dreams and when Joey comes knocking with another opportunity to work for him in London she hops on it.

In the last scene before her grand departure, Zoey asks Aaron to drive her to the airport. At that moment she realizes that Aaron has always been there for her and she kisses him goodbye. That’s definitely going to come back to bit her. Turns out Luca our favorite star-crossed lover was also there to chase Zoey but he was too late.

What will happen with Aaron and Zoey? Will, she ever find out about Luca?