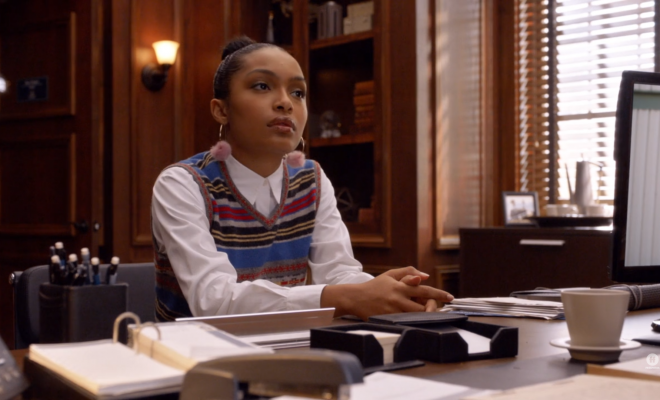 This series follows the story of Bow- and Dre’s oldest daughter Zoey as she embarks on a new chapter in life. She moves away from home and now has to learn how to deal with the growing pains of college. She must learn how to navigate her hectic school and social life while dealing with newfound love, drugs, first-times, and friendships.

The first episode is where we learn about the rest of the characters and how they all came to be in Zoey’s life. First off we have Ana, a catholic republican, who she meets the day before registration. We meet the rest of the gang in Zoey’s midnight class taught by Professor Tuffy, a.k.a Charlie from Blackish. First, we have Nomi, a Jewish feminist who ended up in Tuffy’s class after missing registration to hook-up with a girl in the bathroom. Nice. We then meet Jazlyn (Jazz) and Skyler (Sky), Twin Division 1 track stars, who always have each other’s back. Then there is Aaron, a sophomore activist, who meets Zoey during orientation. He willfully signs up for the class to support Black Professors on campus. Luca, my personal favorite character, is a nonchalant artist, and designer. And finally, we meet Vivek, an Indian American student to immigrant parents, who is a low key drug dealer on the side.

So now that we have met all of the characters let’s get into the drama. In the first episode, Zoey goes to a party with Ana but ends up ditching her after she makes a complete and utter embarrassment of herself by puking everywhere. Not one of her brightest moments. This causes a rift in their newfound friendship but it only gets worse when Ana becomes Zoey’s new roommate. As you could have guessed, their relationship is anything but smooth sailing. In the beginning, Zoey and Ana fight constantly over the dumbest things, but they eventually resolve their conflict and become best friends.

Anywho, Luca and Zoey are partners for a group project in their Fashion Class. And she makes yet another bad decision and decides to blow him off to go see Aaron at an Exhibit, and immediately falls in love with him. After throwing all of her responsibilities out the window, Zoey realizes that she needs to get her priorities in line and decides to pop an Adderall or two (Thank you Vivek) to help assist her in her academics.

She later receives a “U up?” text from Aaron which completely flips her world upside down, and if I’m going to be honest, the drugs in her system can’t be helping anything. She freaks out over this whole “U up?” text debacle. To hook-up or to not hook-up? You know that is the real question in life.

To try and calm her nerves, Luca slides in to comfort her. This unintentionally love-triangle begins as quickly as it ends and Zoey is yet again left all alone. Poor girl.

But not to worry, Zoey has been occupying her mind with other things. She is trying to get a fellowship recommendation letter from Dean Parker. The only downside is that she must tutor the superstar basketball player Cash Mooney. Their relationship starts off a little rocky but eventually, their romantic connection heats up and they officially become an item.

However, it is not all sunshine and roses as haters begin to troll their relationship, and Cash lets out one of Zoey’s biggest secrets and announces to the world that she’s a virgin!

So nice job Cash hopefully you can live to see another day. But nonetheless, Zoey and Cash reconcile their conflict and SPOILER ALERT!! Guess who is not a virgin anymore.

Their relationship at this point seems to be going better than good and Cash admits on live TV that he loves her and can’t go anywhere without her. Is she ready to give up her life and follow her basketball boo around the world?

Bow talks Zoey into not giving up her passions to follow her boyfriend and his dreams. She takes her mom’s advice into consideration, and just like that their relationship is over before it even began.

Zoey is now feeling all of the weight of her first relationship but luckily her friends are there to help her through the breakup.

A random Black-out at Cal-U forces her to process her heavy feelings, and just as she is getting over him, guess how shows up at her door begging for her back… that’s right CASH. Thank god she does the right thing and turns him down and starts focusing on her own dreams.

And speaking of dreams, Zoey gets accepted into the fellowship with Teen Vogue. To no surprise, our other favorite fashion student, Luca, also got the fellowship. Looks like they will be working together in close quarters.

It’s formal time and Zoey is confused yet again about her love life. On one hand, we have Luca who offers to make Zoey a gown for the freshman formal. How romantic.

While on the other hand, Aaron is playing too hard to get. One day he introduces Zoey as “my girl” and the next he is calling her “homie”. But don’t start shipping #zuka just yet because when it is finally time for the big night he leaves Zoey hanging out too dry.

Thinking they are both dead ends, Zoey goes with her friends instead of on a date. But who shows up? None other than Aaron professing to Zoey that he “likes, likes” her and doesn’t think of her as just a “homie”. How middle school of him.

He goes in for a kiss, and just as she is processing everything, she turns around to see Luca holding flowers. Who is Zoey going to choose? In the final episode, Zoey is trying to figure out where her loyalty lies.

To help her figure everything out, Nomi suggests Zoey play fuck, marry, kill, between Cash, Luca, and Aaron. As she is contemplating all of these decisions she finds herself in front of Luca’s door.. Team #Zuca for the win. I can’t wait to see how she continues to mature within her relationships, especially with her new BF Luca.

But I’m even more excited to see her struggles and setbacks, as overcoming those obstacles are the true tests of growth.