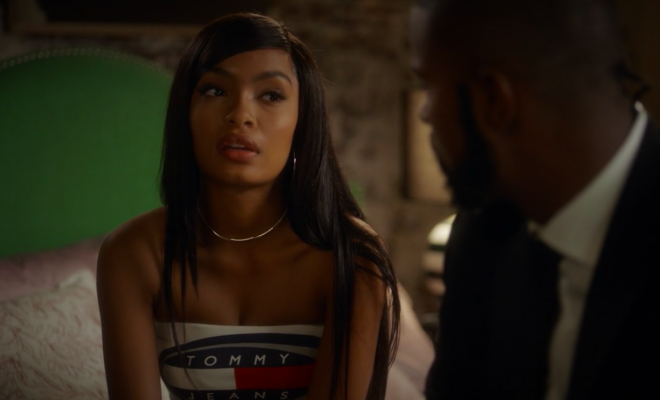 Grown-ish is set to return on January 21st.

So far the mid-season finale left us with many questions. What is going to happen with Aaron and Zoey? What will happen with Zoey and her career? Will she ever return to Cal-U? Nomi’s is having a baby! So much to unpack.

Let’s recap what has happened thus far. At the start of season 3, Zoey becomes Joey Badass’s personal stylist after spending three months in London working for him.

Everything is going well in Zoey’s life. She is now a junior at Cal-U with an amazing job and living with her best friends in a beautiful house. What could go wrong?!

Just as the crew is taking it all in, Nomi shows up 5 months pregnant. Quite unexpected, that for everyone except Luca who found months ago that Nomi was pregnant.

Zoey and Luca’s relationship after the breakup has rocky, to say the least.

They backslide and now have to deal with the fallout of their spontaneous kitchen counter hookup.

They finally end things when Zoey discovers that her new BFF from class, Jillian, is also hooking up with Luca. Awkward.

Anyway! We have a baby to think about.

The crew sets up an impromptu baby shower for Nomi, the only problem is she doesn’t know if she wants to keep her child.

She goes on a deep dive to search for some answers and eventually figures out who the baby daddy is. With so many decisions to make Nomi decides it’s better for her to go back home.

Aaron also has many decisions to contemplate in his future as he is a senior with over 100,000 of debt.

In the business of looking for a job to hopefully chip away at his student loans, he asks Zoey if she can help him get an interview at her dad’s company.

Of course, Zoey forgets to do the one simple favor Aaron asked because all she can ever think about is herself. No shade, just facts.

Aaron gets rightfully pissed at her and she tries to get back in his good graces but he has had enough of her bullshit.

Zoey is overwhelmed at this point, especially with her 21st birthday right around the corner.

So overwhelmed in fact she passes out during her party.

Looks like she’s got to take something off of her plate.

Aaron shows up at her party and gives her some advice about maintaining her priorities.

She takes his word as a sign to quite Cal- U and become Joey Badass’ stylist fulltime.

Just as walking out of the dean’s office after making her final decision to leave Cal-U for good she runs into Aaron. Looks like she is kissing more than just Cal-U goodbye. Not even a long-awaited kiss from Aaron could change  Zoey’s mind.

Talk about making a serious life-changing decision. And speaking of life-changing, a baby is on the way. Nomi’s water breaks while she was FaceTiming with Zoey! Looks like It’s baby time!

Hopefully, we will get some more clarity when the show returns in January.

Will Nomi return with the baby? Will Zoey discover that she has made a terrible mistake? My bets are on she definitely will be replaying that kiss in her head for episodes to come.