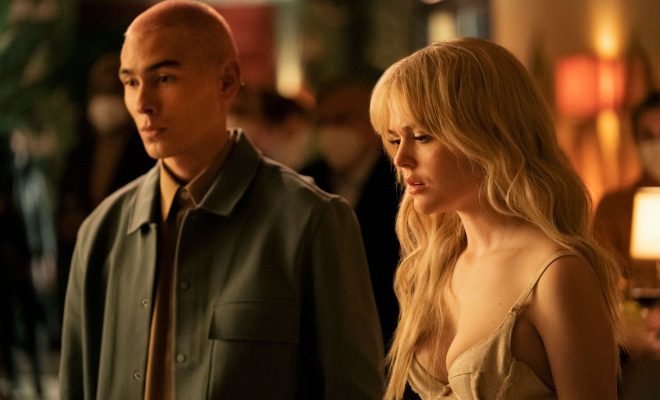 We’re back for our breakdown of Episode 3 of Gossip Girl. Since we’ve been gone, Julien has been going on dates all around the world trying to find a replacement for Obie. Unlucky for her, there have been no boyfriend leads. At school, Audrey finds Julien and tells her all about her sexcapades with Max.  Audrey decides not to tell Aki, but something tells me he is going to find out.

On the other side of the school, Aki is telling Obie about his kiss with Max.  Obie also tells him not to tell.  This Max/Audrey/Aki love triangle is giving me ANXIETY. Zoya has been through the wringer on social media.  Luckily, she has Obie. She invites him to meet her father. At the same time, Max gives Julien a pep talk and tells her that she needs to reexplore herself, and he is going to help her do that.

Back with the teachers, they have been brought in by the headmistress.  Parents are threatening to pull their students from Constance if Gossip Girl keeps going.  While some believe that Gossip Girl is a hero, others believe she is a villain.  They’ve banned students from using their phones on campus, and they’ve hired a Private Investigator to find out who the source is!  Keller decides she’ll start posting about their fellow teachers, so no one will suspect them.

Obie’s meeting the parent is been going well, but not well enough for Father Lott to let them go on a real alone date.  Zoya is distracted by her phone because she is actively getting cyberbullied by Luna. Zoya calls her and asks her to stop using the #Zugly. Luna refuses, but proposes a full makeover for Zoya. Max and Julien’s night together has been going surprisingly well!  So well that she does cocaine-laced with ketamine, while Max is recording. Surprisingly, this plot point doesn’t come back up during the episode, but it really should have, because it gave me SO MANY QUESTIONS!

While Audrey and Aki are in bed together, Gossip Girl posts again.  In a comical scene, Gossip Girl reveals that one of the school’s most popular couples has been unfaithful.  They both believe it is them. Julien meets a woman in the bathroom who tells her about a man she has been dating for the last year but refuses to go public with her.  We don’t have to wait very long to find out that Julien’s father is the mystery man.  At the same time, Max discovers his married father on a dating site.

Katie and the rest of the teachers are struggling with the Gossip Girl investigation.  They suggest scapegoating someone, but who will it be? Obie and Zoya get the chance to go on their first real date together at a play!  Unfortunately, Zoya is distracted and runs off to find Luna. Zoya, you better not make the same mistake Julien did! Aki and Audrey believe someone ratted to GG about them! They both confront Max about telling Gossip Girl, but he insists it isn’t him. Later, Max blackmails Aki into creating an account to catfish his father’s dating profile.  He uses Rafa’s picture and name for the deed.

Luna once again tries to convince Zoya to help her rebrand.  There is a montage of Luna teaching Zoya to be “popular,” and I am not convinced it will ever work. At the play, it is clear that Zoya has taken Luna’s fashion advice.  Julien, her Father, Audrey, Aki, and Max are all there, with a surprise appearance by LOLA!  Julien’s father is quite surprised to see her!  To make matters worse, Rafa is seated next to Max’s dads!  Max switches tickets with Julien so that he can be right between Audrey and Aki!  Brutal!  Things are going alright with Zoya and Obie, but then Julien takes her seat behind them! Things are tense at this show!

After the show, Julien confronts her father, and it is messy!  She says she feels lied to and doesn’t know what aspects of their life were real! After hearing Max’s fathers hating on the show, Zoya finally bursts.  She lets her opinions be known, leading to a run-in with the show’s creator.  He invites her to a private room! Obie has begun to get frustrated by Zoya’s aloofness. Speaking of Max’s fathers, Max spills the tea that one of them is cheating, and it leads to quite the confrontation.

Zoya and Obie finally have their first conversation as a couple.  She confesses that she was trying to act like Julien in order to make him happy.  They finally talk to one another, and it seems like they’ll be able to recover from this.  Julien walks by, and Obie finally has a heart-to-heart with her.  He contributed to Julien changing, and he finally apologizes to her for that.

The main Gossip Girl teachers call another teacher (Reema) and inform her that her husband’s old boss was involved with a student.  They invite her to post it on the GG account. Back with Max, he is not holding up well. He tells Aki and Audrey the truth about both of them, then he leaves. When Audrey and Aki finally talk, they decide to stay together, but maybe they shouldn’t have!

Julien and her father talk openly to each other.  He tells her why he kept Lola a secret and promises to never do it in the future. Julien asks to meet her. Obie and Zoya share a kiss in front of her building, and it is photographed by the DOORMAN! Gossip Girl has people EVERYWHERE!

Rafa and Max talk about what Max did to his fathers.  He cries to Rafa, then spends the night at his house (but don’t worry, nothing sexual happens). Reema is fired for posting the tip about her father’s old boss. Luckily, she promises that she didn’t tell anyone about the other Gossip Girl admins.  Wow, they fully set that woman up to be caught!

If things seemed harmonious in the last episode, they certainly don’t now. Check out our video breakdown for more of our thoughts on this episode!