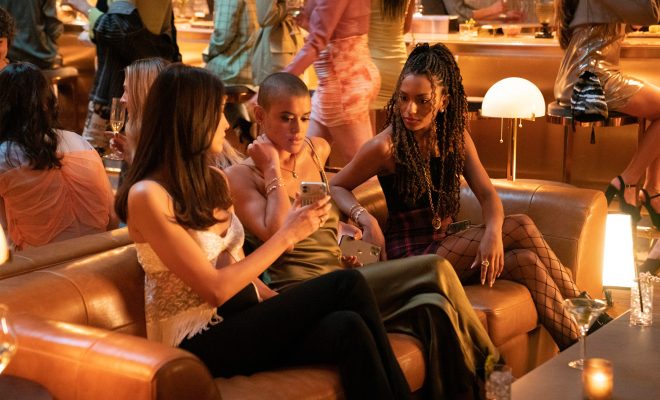 Spoilers Ahead for Episode 2 of Gossip Girl (2021)

In Episode 2, it looks like this Gossip Girl project is working! The teachers are loving living (less) in fear than they were, but that doesn’t mean they’re stopping the account! They’re waiting for the perfect moment to jump back into posting. With that said, things with the students are less harmonious. Obie and Julien still haven’t gotten back together, and she is hemorrhaging followers because of it.

We also learn a little bit more about Audrey. Her mother doesn’t have a major presence in her life, and it doesn’t help that she’s often drunk. Max is quite interested in his teacher! While at a club, he hits on Rafa Caparros, who rejects these advances for the time being. Obie shows up at Zoya’s apartment. She is still grounded because of the whole “lying about the scholarship” thing! Zoya is worried that someone may see them, but Obie assures her that these fears are unfounded.  Let’s see about that…

Ms. Keller, AKA the voice of Gossip Girl, receives a photo that who other than Obie and Zoya are together! She posts it as Nick Lott walks in. Julien is pissed when she sees that post. She finds an old photo that the two of them took, and posts it, trying to pass it off as something that just happened. I’m sorry Julien, it may be unwise to challenge Gossip Girl. Ms. Keller and Zoya’s father are discussing Zoya, but I can’t help but notice sparks flying between them. She has to interrupt to check her phone, where she sees people are actually believing Julien’s post!

The next day, Audrey tries to convince her mother to attend the fundraiser she is hosting, but she resists. She very reluctantly agrees to come. Zoya’s father warns her that the school board does NOT want a scandal. She’s going to have to keep her head down if she wants to keep that scholarship! Let’s see how well that works!

Obie and Julien finally have their heart to heart. He assures her that this is not a break and that he has no intention of getting back together. He leaves a crushed Julien behind, and immediately asks Zoya out on a date. She initially says no, but he is eventually able to convince her under the condition that “no one can find out”. And Julien is so desperate to get Obie back, that she goes to an unlikely source: Gossip Girl.

Max and Aki go to a “spa” so that Max can make Raja jealous. The two make out, and the act of passion certainly gets Raja’s attention. He is not happy that Max has been following him! But Aki seems QUITE happy that he got to help. Zoya comes to the headmistress office, and she and Ms. Keller begin to bond. Keller begins to dig for information, only to learn that something BIG happened at Zoya’s old school. She is on the case to find out what happened.

Finally, we hit the big event- The Fundraiser. We find out that Obie bought Zoya’s tickets to the event, and that first date they were talking about? Yeah, that’s tonight. Hiding in plain sight, not a bad move Obie. Those sparks around Katie and Zoya’s father were no mistake, and it looks like they may just spend the whole fundraiser together.

But Zoya’s dad isn’t the only one here.  Julien’s dad is too, and if you remember from the last episode, they HATE each other. Julien finally has to tell her father the reason why Zoya and her father are at the party, and it does not go over well.  We still don’t know why they hate each other! Audrey’s mom is DRUNK! Audrey tries to get her home, but not before she breaks a glass on her hand.

Obie convinces Zoya to leave the fundraiser for an hour, but unlucky for them, Gossip Girl saw them leave and follows them out. Julien realizes her whole life was better before Zoya got here, and she is finally ready to get her out! She gets Gossip Girl to tell her where they are, and she is off! She gets her dad and Zoya’s dad together, and brings them with her. Aki and Audrey get her mom into a Lyft together. She starts ranting at him, but he won’t let her! Aki, just let this girl rant!

At the store where Obie and Zoya are buying supplies for underfunded schools, we finally have a kiss and a confrontation! Julien, Davis (Julien’s dad), Nicky (Zoya’s dad), Zoya, and Obie all in one spot. And don’t forget about Gossip Girl peering around the corner. Nicky is PISSED, and he takes Zoya home on the spot.

The next day, Audrey and her mom finally have a heart-to-heart. Her company filed for bankruptcy, and they just shut down a bunch of their factories. When Audrey leaves the room, we see that she and Max just spent the night together. They promise to keep it between each other.

When Julien gets back to school, she hears the news that Zoya withdrew from Constance. Julien takes her into the bathroom to convince her to stay. Julien promises not to interfere with her and Obie, and Zoya finally agrees to stay.

For the moment, things appear to be harmonious. At least for now…

For more on this episode, don’t forget to check out our video breakdown on Episode 2 of Gossip Girl!